We all remember what happened with dairy prices in the last recession. If you weren’t in the industry back then, ask someone who was, it was a pretty incredible fall from record high levels down to government support. With concerns that the US (and maybe the world) is headed for another recession, it’s time to look at the connection between economic growth and commodity prices. But first, let’s dig into what a recession is and some of the numbers behind the US economy.

Somewhat surprisingly there is no government agency that declares whether the US is in recession or not. The National Bureau of Economic Research (NBER) is a private non-profit that is dedicated to economic research and its dissemination. It’s their research on dating business cycles that is most often used to determine when recessions have occurred in the past. According to NBER, there have been five recessions since January 1980. The average recession since 1980 has lasted 11.2 months and the average decline in GDP from the peak was 2.2%. The great recession in 2008/2009 lasted 16 months and GDP declined by 4.0%. So, when we think about the collapse in dairy prices that we saw in 2009 it’s important to remember that the last recession was 50% longer than average and the decline in output was 100% bigger than average. Are we likely headed into a 2008/2009 type recession? Probably not. 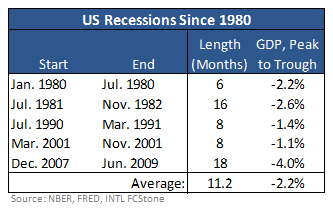 The concerns that keep popping up in the media are currently around business investment. The economy was already expected to slow in 2019 and 2020, so businesses were already expected to slow new investments.  But there are increasing concerns that uncertainty about government trade policy is weakening investment even further. The Atlanta Federal Reserve did a survey back in January and found that trade tensions had reduced investments by 1.2%. Goldman Sachs, who back in June didn’t see much negative impact on business investment from the tariffs, now says companies who sell to China are slowing investment faster than other companies. That got me curious about what share of US Gross Domestic Product (GDP) is driven by investment.

Sometimes equations make things look more complicated, sometimes they make very complicated things look simple. The equation above makes GDP look pretty simple. At the highest level, GDP is made up of just 4 components; (private) consumption, investment, government purchases and net exports (which are exports minus imports). The categories are pretty straight forward. Consumption is all the stuff households consume. Government purchases are things the government consumes, like paperclips and bombs. Investments are things that are purchased and expected to generate value in the future. Investing is mostly done by businesses, but residential housing is also included in this category. Net exports are pretty self-explanatory, and they are the only category that was negative in 2018. They have been negative every year since 1975. The US exports more services than we import, but we import far more physical goods than we export which pulls the whole category negative.

Investment made up just 17.6% of the economy in 2018. Consumption was 68.0% of GDP while government purchases were 17.5% and net exports reduced GDP by 3.1%. So, consumption is by far the largest driver of the US economy. Consumption growth has recently been strong, up 4.3% on an annualized basis in the second quarter of 2019. For the past five years it has been bouncing around in a range of 1.0% to 4.9%. Investment makes up a smaller portion of the economy, but it has slowed markedly in the past year from 13.7% in Q3 of 2018 to -5.5% in the second quarter of 2019. At the low point in the 2008/2009 recession, investment fell at a 38.8% annualized rate, so it can make some dramatic swings when sentiment turns negative. There hasn’t been much in the way of happy-feeling headlines lately, so investment will likely remain a drag on the US economy in coming quarters.

But if we do slip into recession, what kind of impact should we expect on commodity prices? INTL FCStone invests a lot of time and resources in tracking and modeling global demand for dairy products and there is a large and strong connection between GDP growth and dairy demand. In our modeling, every 1% change in real GDP growth globally drives an 8.5 to 9.5% change in dairy prices. A recession would hurt dairy demand and keep dairy prices lower than they would have been in a more robust economy. But if you look at what dairy, and other commodity prices, have done during recessions in the past, a recession does not guarantee a drop in commodity prices. 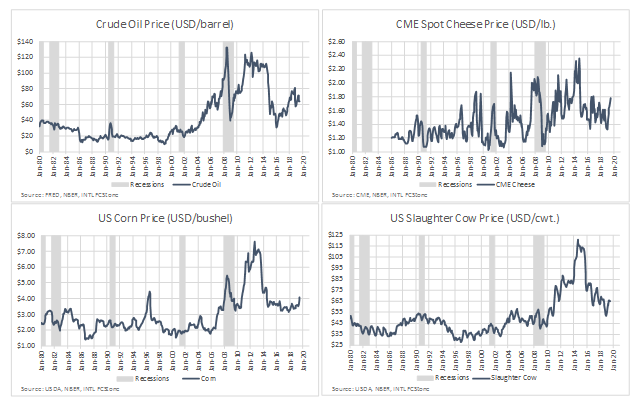 The supply side matters too. If the supply side is tight enough, you could still see commodity prices rally or hold steady even in a recession. Specifically, for dairy it looks like US and global milk production growth is going to be running below average through the first half of 2020 before bumping up to average growth during the second half of 2020. Even if we enter a recession in early 2020 it might not push dairy prices dramatically lower if supply remains tight.

For more details and forecasts sign up for a free trial of our market intelligence service, go to:

Nate Donnay is the Director of Dairy Market Insight at INTL FCStone Financial Inc. and has been applying his interest in large complicated systems and statistical analysis to the international and U.S. dairy markets since 2005. As a consultant, he has worked with clients at all levels of the dairy marketing chain from the farm level up to processors and packaged foods companies, food distributors and restaurants as well as connected industries like banks, private equity groups, government agencies, and industry associations. Through ongoing reports or one-off client specific projects, he helps them understand the short and long-term trends and the underlying relationships driving the market and what that means to their businesses.

Nate Donnay, Director of Dairy Market Insight for INTL FCStone Financial, provided an overview of global dairy markets in his article in the September 3 issue of DairyBusiness Digital. In this conversation with Joel Hastings [Read More …]