Small grains are an integral part of the forage-livestock system in the Oklahoma/Texas region as they can be grazed from late fall to spring, when perennial warm-season forage species remain dormant. In addition, the program aims to improve small grains for enhanced utility as a cool-season cover crop to facilitate agricultural cropping systems that regenerate the land. The major crops covered under the program are wheat, rye, triticale and oat.

WHEAT
Wheat is the largest and most important grain crop in the southern Great Plains. About 9 million acres of wheat are planted in Oklahoma and Texas annually. Wheat is not only grown for grain. It is also an important cool-season forage crop in the region. About 30-50% of the wheat planted in the region is grazed in a graze-only or graze-and-grain (dual-purpose) system. When growing conditions are favorable, managing wheat as a dual-purpose crop may provide an economic advantage rather than managing it as a grain-only or forage-only crop. Although forage yield of wheat is lower than rye and triticale, it is still the most popular small grain crop for winter forage production because of its economic flexibly on producing forage and/or grain depending on market profitability. 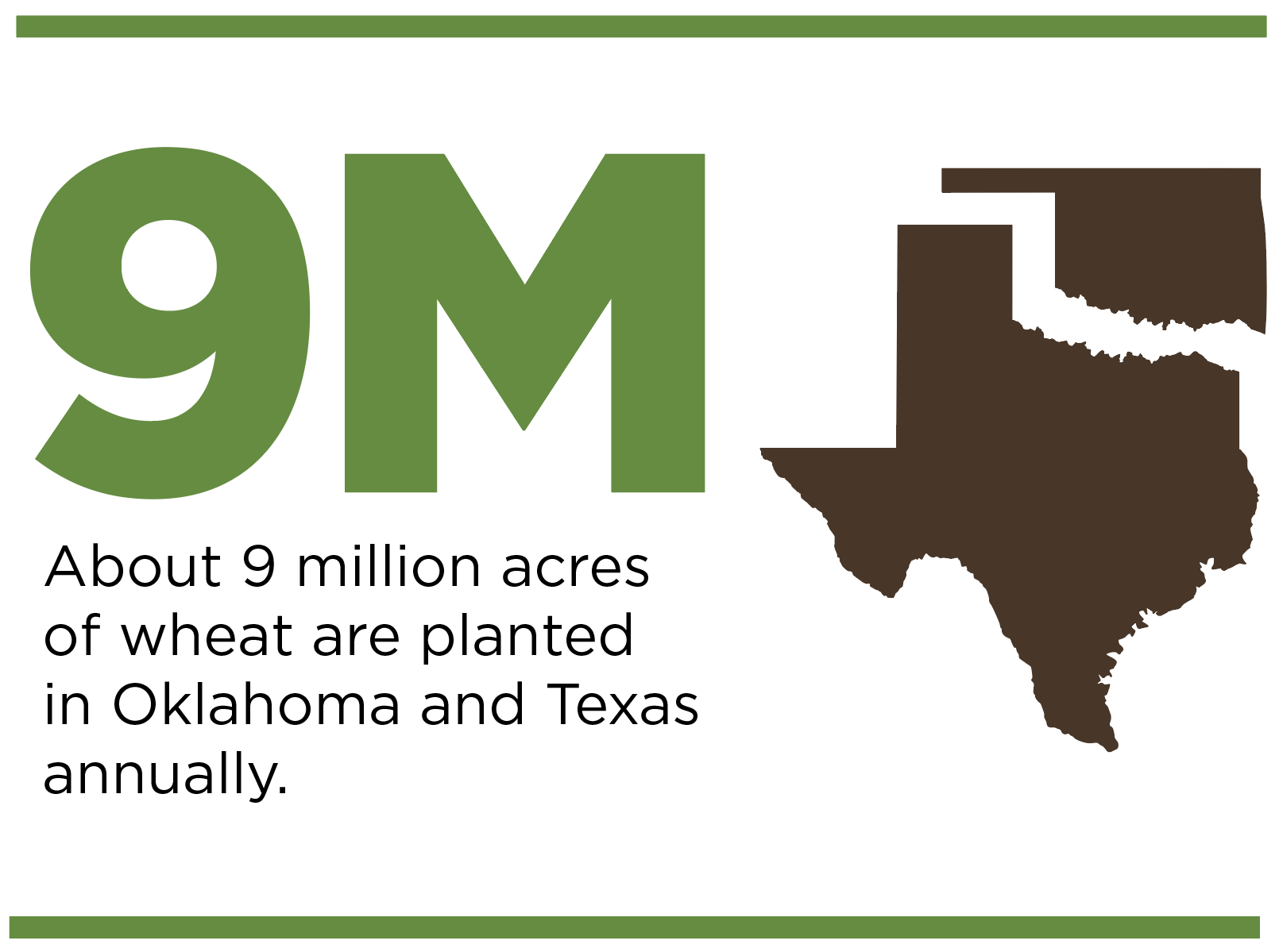 In collaboration with Oklahoma State University, the wheat breeding program at Noble Research Institute develops improved dual-purpose wheat cultivars with superior fall-winter forage production. One focus of the wheat program is to increase early seedling vigor with superior heat and drought tolerance to reduce risk of establishment failure in the fall when the crop is planted early for producing more fall-winter forage. Grazing tolerance, regrowth vigor, resistance/tolerance to multiple diseases/pest, and grain yield, among many other traits, are also primary targets to improve. Currently, the program is advancing a wheat breeding pipeline consisting of a 10-12-year-cycle of breeding materials at various stages. Three wheat lines are at the pre-release stage with a potential of being released within three years.

RYE
Cereal rye has excellent biotic stress tolerance to multiple diseases and abiotic stress tolerance to frost, drought, low pH and marginal soil fertility. It is an important forage crop for fall-winter grazing in the southern Great Plains. It always performs better than any other small grain in the light-textured soils of the Red River Valley due to its prolific root system. Rye is also the most widely grown cover crop because of its competitive ability to suppress weeds and scavenge residual soil nitrogen after other crops. Oklahoma is the largest rye-growing state in the USA, at least partially due to Noble’s historical contribution in releasing a few well-known rye cultivars, such as “Elbon,” which has been widely grown for more than 60 years.

In addition to increasing fall-winter forage yield, the rye breeding program also focuses on selecting resistance to seedling blight. Early planting in the fall may increase occurrence of seedling blight, which causes seedling death under high temperature and excessive moisture conditions after thunderstorms. Delayed flowering is also an important trait for not only extending the grazing season of rye but also increasing seed yield by alleviating potential cold damage on pollens in early spring as rye flowers rather early. At present, the rye breeding program advances a rye breeding pipeline with materials at various breeding stages from preliminary yield trials to elite yield trials. Four rye lines are at the pre-release stage, and one of them is to be commercialized soon.

TRITICALE
Triticale is a manmade crop from hybridizing wheat and rye for combining the best traits of the two parental species. It inherited its grain yield potential from wheat and its tolerance to various stresses from rye. Triticale has been widely grown for different purposes, from grazing to feed, in the livestock agricultural system. Triticale is an important small grain forage as it produces more forage biomass than wheat, especially in low nutrient or marginal land, and better forage quality than rye. Besides being grown for filling the forage quantity gap in winter, triticale is also widely used for producing silage to cover the forage quality gap during dry, hot summers.

Triticale has the potential of becoming more popular as an alternative forage to wheat and rye in the region although it has received the least breeding effort compared to other small grains. The small grains breeding program at Noble Research Institute aims to establish a triticale breeding pipeline with a focus on developing improved cultivars for grazing pasture. Similar to wheat, fall-winter forage yield, total forage yield, seedling vigor, grazing tolerance, delayed senescence, grain yield, pre-harvest sprouting resistance and awnless traits are of primary interest under selection.

OAT
Oat is an important forage crop and is a useful alternative to wheat grown for stocker cattle production. Oat is generally the most preferred forage by grazing animals among all small grains because of its superior palatability. The expanding stocker cattle production in the southern Great Plains has created a viable market potential for oat as a winter forage crop.

Oat grows fast and generates very competitive forage biomass yield in the autumn and spring when air temperature is optimal for the crop. However, it produces much less forage in the winter than other small grains because of its sensitivity to freezing temperatures. Therefore, improving freezing tolerance is the primary focus of the oat breeding program at Noble. The program has screened thousands of oat germplasm lines for establishing a breeding pipeline that will deliver improved winter oat cultivars for forage production.

FINAL THOUGHTS
In short, these four species fit best in different livestock production systems, and they provide complementary advantages for cool-season grazing. Breeding goals of the four species are similar, but each has its own emphasis. While the program is still establishing the breeding pipelines of triticale and oat, it has already produced improved wheat and rye elite lines that can be released periodically.