A great deal of time is spent on the basics of an optimum corn silage harvest. This time is justified as these steps are critical to a successful harvest, where the decisions made during a very short time period impact the farm’s production performance and economics for the upcoming year. These important decisions include harvesting at the proper dry matter, adequate kernel processing, proper length of cut, and proper packing and covering of bunk silos. An overview of this information is covered inSetting the Stage for Success: Corn Silage Harvest.

The following will cover additional considerations for understanding and managing the forage quality of the crop.

As part of the Corn Silage Hybrid Evaluation program, we have focused significant attention over the last two growing seasons on the interactions between growing environment and corn silage forage quality. While this work is still developing, it does build on earlier knowledge of the impact of growing conditions on plant development, and provides some insight into managing the corn silage crop for forage quality.

Plant Development, Weather and Fiber Digestibility
Plant physiologists have long understood that characteristics of corn ear development are determined early in the growing season. Before the crop even reaches the reproductive stage of growth it has already determined the number of kernel rows per ear and the number of kernels per row. It is also understood that hot weather around the time of silking (three to five weeks) can lead to increased lignin content in the plant.

In recent years, long term fiber digestibility measurements by laboratories have become more common. Neutral Detergent Fiber (NDF) digestibility at 30, 120 and 240 hours is now commonly measured, as well as the undigested NDF (uNDF) at these same time points. In 2015 and 2016, the Dairy One Forage Lab conducted a study where they tracked season-long weather information and measured its impact of uNDF content of the silage.

While we have seen these same trends in the Corn Silage Hybrid Evaluation program, we are awaiting more site years of data in order to draw stronger conclusions.

The impact of this information on the 2018 crop will be of interest as we have had an overall warmer than average growing season, despite a relatively cool June, in addition to above average rainfall in August after excessively dry to drought conditions earlier in the season.

Taking Forage Samples at Harvest to Map Forage Quality
Given the number of factors that affect forage quality, and their field specific nature, we continue to encourage producers to take samples at harvest, making sure to record both hybrid and field location. This information will help determine the farm specific impact of growing conditions, planting dates, hybrid selection, and soil type on resulting overall forage quality and, specifically, fiber digestibility. Sampling could also be done at feedout in situations where you are able to document exactly where specific fields and hybrids are located within the storage structure.

Corn Silage Chopping Height Considerations
Corn silage harvest height tends to be a topic of discussion in years of above average yields or significant carryover from the previous year. As we enter the 2018 harvest season, many farms have adequate carryover of (generally lower digestibility) corn silage. 2018 crop conditions vary greatly, and while some areas may be faced with below average corn silage yields, there are areas of the state where yields are expected to be above average. For some, the prospect of having a corn crop with better fiber digestibility to dilute out the remaining inventory of poorer 2017 corn silage is of interest.

A number of studies have been conducted to determine the pros and cons of varying the cutting height of corn silage and Penn State provides a good review these.

Given the significant impact that growing season and other management factors can have on forage quality, it is not surprising to see some variation in the end results. This is also true of the magnitude of impact that cutting height can have on corn silage. However, when averaged together, we can develop a few “rules of thumb”. In general, when starting with a cutting height of six to eight inches, raising the height of cut by approximately 12 inches, to 18-20 total inches, will result in the loss of approximately two tons per acre of yield (at 35% dry matter), but will gain five to six percentage points of NDF digestibility. Furthermore, given the fact that you will be harvesting less stalk but the same number of kernels, the percentage of starch in the resulting silage will increase.

In addition to the factors already discussed, the apparent interaction between Fiber Digestibility and Soil Type is another piece of relevant information from the Dairy One study and the Corn Silage Hybrid Evaluation program. Preliminary data indicate a trend of lower fiber digestibility on heavier soils. The work by Dairy One found that Hydrologic Class A (well-drained soils) were lower in undigested NDF (uNDF) than other soil classes. 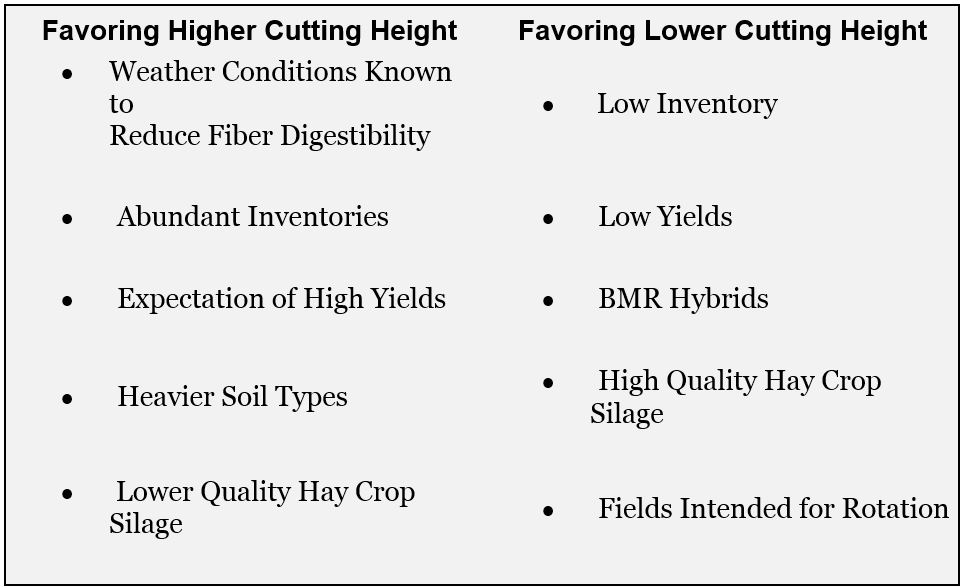 Pre-Harvest Height Sampling
While it may be a little late for this year, those serious about making decisions to optimize yield and quality in the future may be interested in an idea suggested by Dr. John Goeser at Rock River Laboratories.

Many farms now “stage” corn fields prior to harvest to determine harvest order based on whole plant dry matter. During this time, it is suggested that you cut some stalks (Dr. Goeser recommends three to four stalks per height) from each field at different heights, chop them up, and send them to the lab for analysis that includes NDF digestibility; similar to collecting a representative bundle of stalks for whole plant dry matter testing. In this way, you will be able to better understand the impact of cutting height given the unique conditions that your corn crop experienced during the growing season, and therefore, better understand the tradeoffs between yield and quality for that season. Common cutting heights are in the range of six, 12, and 18 inches, but could vary by farm. If you traditionally chop low to the ground, then picking an increased height that provides a reasonable tradeoff based on what we know about yield decline with increased cutting height, will give you an idea of what could be gained in forage quality on your farm.

Presented by Cornell CALS PRO-DAIRY and Cornell Cooperative Extension One can argue that IOFC (income over feed cost) begins when forage is delivered to the feed center – in this case,  the bunk. This podcast [Read More …]

Opening up new silage is commonly associated with a dip in milk production, but the transition can be smoother — and less costly for producers — with a few easy fixes. “In the fall, producers [Read More …]