Dairy cows are very susceptible to heat stress and will adapt by reducing their milk production. Only half of that milk reduction is explained by a lower dry matter intake; other metabolic changes are involved including a shift in the use of glucose by the mammary gland to other tissues, reducing its availability for milk production, a reduction in rumination and nutrient absorption and an increase in maintenance needs to dissipate heat (Baumgard et al., 2012).

Heat stress is particularly detrimental to modern type high producing cows which were selected intensively for productivity. They have a large body mass which implies a high metabolic heat production to meet their maintenance needs; this factor explains partly why they are less tolerant to heat (Rhoads 2017). Even if management has improved to reduce the effect of heat stress, the economic loss related to heat stress is still closed to $1 billion in the USA (St-Pierre, 2003). This loss of revenue is due to a reduction in milk production, butterfat yield and reproductive performance.

At which temperature can we identify if a cow is suffering from heat stress?

A tool called the Temperature Humidity Index (THI), was developed to identify when heat stress will negatively affect the performance of dairy cows. Both temperature and humidity should be considered since the combination is worse for the dairy cow.  For the same temperature, the THI will increase with humidity and vice versa. The THI is a color-coded chart showing various levels of heat stress severities with the heat stress threshold at a THI of 68 and a severe heat stress at 90 (Collier et al., 2012). At THI 68, dairy producers need to start adjusting management and nutrition to minimize the impact of heat stress on their dairy herd. An example of THI 68 is a temperature of 23?C with a humidity of 40% (you can get the THI chart by clicking on the web link below). The temperature and humidity measurements should be done in the cow barn, not by simply using the local weather station. The length of the heat stress will impact performance and recovery will take weeks.

The heat-stressed cow will adapt differently than the unstressed animal.  They will not mobilised body fat tissue to meet the energy demand for milk production even if the dry matter intake is reduced and not sufficient to meet the energy requirement (Tao et al., 2016). This was shown in a controlled study when dry matter was reduced to the same extent for heat stressed cows than cows under thermo-neutral environment; the blood non-esterified fatty acids (NEFA) of cows under heat stress did not increase compared to cows under thermo-neutral environment (Baumgard et al.,2012).

Calves born from cows experiencing heat stress during the dry period will have a lower birth weight and a lower weight and height at 12 months of age. These heifers will become pregnant later and will require more services per conception than heifers from cows that were not under heat stress conditions. Their first lactation yield will also be reduced by 5 kg (11 lbs) per day at least for the first 245 days in milk (Dahl et al., 2016).

Heat stress preceding and during the breeding period will affect the reproductive performance of the cow but also its future progeny performance.

When cows are under heat stress, the heat expression is depressed, due to a lower production of estradiol, and the quality of the ova is reduced. Lower quality ova may influence the viability of the embryo (Santos et al., 2011). Early embryo development up to day 6 is impaired when the body temperature of the dairy cow reached 38.9?C (102?F) (Hansen et al., 2012). This explains the lower pregnancy and conception rates observed during summer months, when cows are under heat stress. It takes 40-60 days following heat stress before fertility returns to normal.

Recent studies showed an association between heat stress during the breeding period and the subsequent milk production of their progeny. The future milk production of the heifers born from the heat stressed cows was 82 to 399 kg (181 to 879 lbs) less during their entire lactation than heifers from cows under thermo-neutral environment (Rhoads 2017).

What can be done to reduce the impact of heat stress on dairy cows?

The use of cooling systems and a reduction of stocking density are sound management tools to reduce the extent of the heat stress during summer months. Providing clean water along with some nutritional adjustment to the ration will alleviate the risk of reduced performance.

The supplementation of some protected B vitamins in the diet during the transition and lactation period is also beneficial to reduce the negative impact of heat stress. B vitamins are essential nutrients and have specific functions in the energy and protein metabolism of the dairy cow, in the immune response, the follicular development and the early embryonic survival. Some B vitamins, like biotin (B8), cobalamin (B12), pantothenic acid (B5) and riboflavin (B2) are also important enzyme cofactors involved in glucose synthesis, which is occurring in the liver. Liver function is crucial and some B vitamins like folic acid, B12 and choline are nutrients involved in the mechanism to reduce the risk of fatty liver.

An increased milk production and milk components yield, along with an improved energetic efficiency was observed when early lactation cows were supplemented with a specific blend of protected B vitamins during the summer in California (folic acid, pyridoxine, pantothenic acid and biotin) (Sacadura et al., 2008). 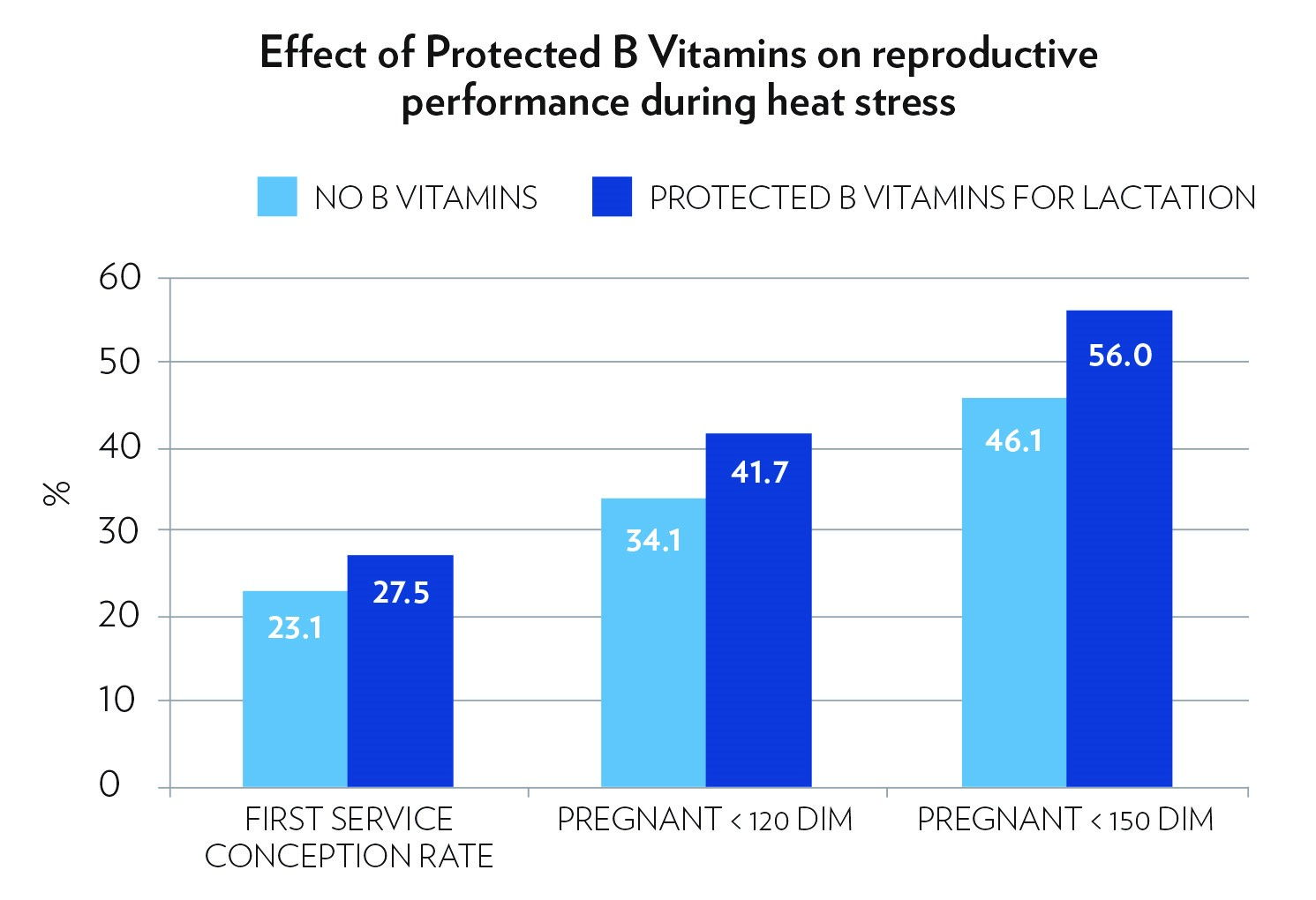 The dairy cow will adapt to heat stress by modifying its metabolism to reduce heat expenditure. Milk production and reproductive performance will be negatively impacted resulting in a loss of profit for the dairy producer. Supplementing a blend of protected B vitamins during the transition and the lactation period is an innovative tool to provide ammunitions to dairy cows to counteract the heat stress impact and improve performance.

Helene LeClerc is manager of Technical Support and R & D with Jefo Nutrition Inc., St-Hyacinthe, Quebec, Canada. She may be contacted at [email protected].

For more information, go to www.jefo.com

WEBINAR: “Managing heat stress to improve the welfare of dairy cows and calves”

Dairy Cattle Welfare Council Webinar Series https://dcwcouncil.org/ These one-hour live educational sessions are available to attendees from around the world. Live webinars are free of charge, but you must register (recordings are available to members [Read More …]

Milk Production is Decreasing. – Is it Enough?

In 2018, there was more milk being produced than was needed.  A lot of that excess milk went into cheese, bloating inventories and making wholesale cheese prices fall.  That directly affected producer prices.  Six months [Read More …]

Effects from Heat Stress Can Stretch into Fall

The effects of heat stress can continue long after cooler weather has arrived — even for cows not in milk. In fact, research has shown that proper cooling in the dry period improved subsequent lactation [Read More …]