In Canada, the majority of dairy producers have at least tried, for one reason or another, genomic testing heifers in their herd. Some saw very little value and/or did not know what to do with the results while other herd owners have adopted a policy to automatically genotype every heifer born on the farm as soon as possible after birth. Let's take a closer look at heifer genomic testing and why the response by producers has been so variable.

There are three main reasons why dairy producers should consider genotyping heifers born in
their herd:

In terms of economic benefits, in most herds it is the gain in accuracy that yields the highest
return on the investment of genomic testing. In addition, the optimal use of genomic testing in
most herds is not a simple question of "Yes" or "No" but more "What percentage of heifers and
which ones?".

In most Holstein herds, the average Parent Average (PA) Reliability for LPI and Pro$ ranges from 30 to 39%. Once heifers are genotyped, however, the average Reliability of the resulting Genomic Parent Average (GPA) is commonly between 69 and 73%. This significant increase in genetic evaluation accuracy provides Holstein breeders with a tremendous opportunity to make better selection and mating decisions to achieve their desired breeding objectives. As expected, when the accuracy of genetic evaluations increases then some heifers in the herd may receive a significantly different value for GPA compared to their previous PA. Such changes in heifer evaluations result in some degree of re-ranking. 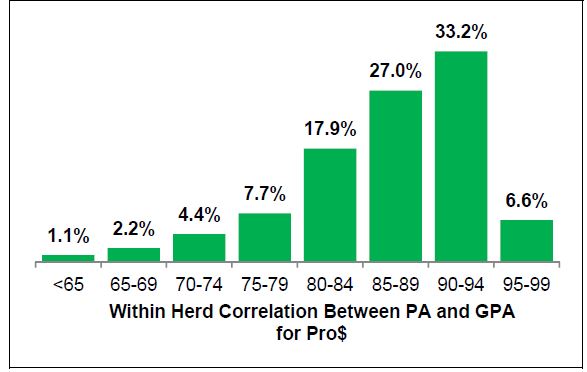 An analysis at Canadian Dairy Network (CDN) calculated the correlation of GPA versus PA values for LPI and Pro$ for hundreds of Holstein herds that had genotyped several heifers in 2016 and 2017, which are presented in Figure 1 for Pro$. For 60% of the herds studied, the correlation of heifer evaluations before and after genomics was between 85 and 94%, and another
6.6% of herds had even higher correlations. These high correlations for two-thirds of the herds studied indicate that most heifers in these herds would rank similarly based on GPA compared to PA for Pro$. Also of interest, however, are the remaining herds that had a lower correlation of heifer evaluations before and after genotyping, some of which were even below 65%. Figure 2 helps to better visualize the impact of genomic testing in three Holstein herds that each had more than 100 genotyped heifers in the CDN analysis.

The plots for Herds A, B and C show the distribution curve of Parent Average values for Pro$ versus the curve for Genomic Parent Averages. For Herd A, the correlation between GPA and PA was among the lowest found, which resulted from the fact that genomic testing spread out the heifers across a wider range of Pro$ values. In this case, the benefit of genotyping all heifers is clearly obvious. Recall, also, that the average Reliability of the GPA values increases significantly by genomic testing so this herd owner can make much better selection and mating decisions based on the new ranking of the potential heifer replacements.

Herd B has a more moderate correlation between PA and GPA after genomic testing compared to Herd A. This result is a reflection of the important increase in the spread of heifer evaluations with genomics in this herd. In herds like this, genomic testing a significant portion of targeted heifers is expected to be the most economical strategy.

Looking at the comparison of curves for Herd C, it is clear that the correlation of GPA and PA for Pro$ was very high. It should be noted, however, that individual heifers will have changed their evaluation from genomic testing and therefore will rank differently based on the gained accuracy of GPA values. Even in herds with a very high correlation of heifer evaluations after genotyping, there is likely a group of heifers for which genomic testing makes economic sense.

While there are various reasons for genomic testing potential replacement heifers in your herd, including parentage verification and management of genetic recessives, the main benefits stem from the significant gain in accuracy of heifer evaluations. For Holsteins, the average Reliability for LPI and Pro$ more than doubles from 33% for Parent Average values to 70% for Genomic Parent Averages. This increased accuracy of heifer evaluations will usually spread out the distribution of heifers for LPI and Pro$ and result in some degree of re-ranking. In reality, the degree of heifer re-ranking experienced within a herd is dependent upon several factors. It is only through genomic testing that herd owners can concretely know how much re-ranking will occur. Even for herds with little re-ranking, the higher accuracy in heifer evaluations can yield a significant return on the investment of genomic testing through an increased confidence for making better selection and mating decisions.

2019 Herd Health and Nutrition Conference – Will you be there?