Probably you’ve read that genetic diversity in dairy animals is declining because we’re only sampling sons of the best males from dams sired by many of the same top bulls.

It is true. The DNA from the top males has increased and supplanted alleles previously present. Some population alleles are less frequent, some have even vanished. That has always been the case. Although some alleles disappear (even with random mating), there is no denying that the number lost is greater when there’s a heavy percentage of mating to a limited number of bulls. A few new alleles are being added through mutations, yet these can be either beneficial or unfavorable. Some of the threatened alleles seem dispensable from an economic prospective in the current environment, but very well might be valuable under different environmental conditions. 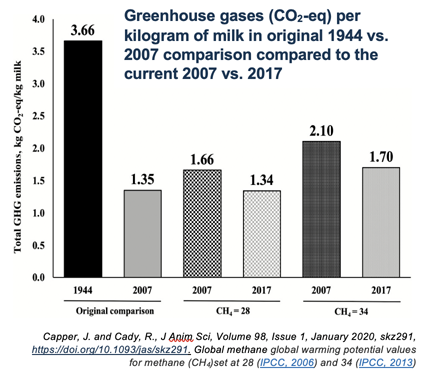 There’s no arguing that the strategy of breeding the best to the best has worked well up to now. For evidence: U.S. cows average five times the milk annually that they did in 1940 … and the good news keeps coming. A recent paper2 showed that the impact of the U.S. dairy enterprise on the environment is far less than it was just 10 years ago. Increased productivity has spurred that improvement. The greenhouse gas (GHG) emissions needed to produce a unit of energy corrected milk (ECM) in 2017 was only 81% of that needed to produce the same yield just 10 years earlier. The total ECM increased by 25% between 2007 and 2017, while the GHG emissions increased by only 1%. Reduced requirements for land, feed and water were equally impressive, and similar advances were made in reducing waste outputs (methane, phosphorus, nitrous oxide, and manure) as well.

When genomic evaluations were kick-started in 2009, a point was made that this technique provided an opportunity to slow the increase in inbreeding. If breeders test a large number of animals, then those selecting the candidate bulls can keep the door open for more diversity. Breeders can select those that combine a high genetic estimate and a low relationship to the population. The prospects for successfully doing so improves as the number of animals genotyped increases. In this scenario, one can screen among more families than otherwise. Fortunately genomic testing permits one to determine the relationship of each animal to the population more precisely than when one relies only on the pedigrees.

The key is how we use genomic results

The rate of inbreeding is not increasing because of genomic methods. Inbreeding rates are determined by how genomic results are used by the ones actually selecting the next generation of parents.

An animal having one or more of the same ancestor(s) somewhere in both their sire’s and dam’s sides of the pedigree have identical allelic pairs coming from the same individual(s). The closer those relatives are to the animal, the more identical alleles they are likely to have. This can be precarious if that ancestor is the carrier of undesirable genes.

Even though it is often well-disguised due to the large overall variation among cows, inbreeding has negative impacts on most individual performance traits, and the impact can be revealed using basic statistical methods. An average reduction in milk yield per lactation of 66.5 pounds is expected for each 1% increase3 in inbreeding. Reductions of 2.5 and 2.0 pounds in fat and protein yields have been documented for each 1% increase, respectively. Fertility takes a hit also; heifer conception, cow conception and daughter pregnancy rates are reduced by 0.08, 0.21 and 0.16% per 1% increase in inbreeding. Fertility declines can be explained partially by early embryonic losses resulting from haplotypes; several haplotypes have been uncovered in the last eight years. Productive life drops by 0.24 months (about 1 week) and cow livability declines 0.07% for each 1% rise in inbreeding.

Nevertheless, genetic gains resulting from intense selection (even though they contribute to inbreeding) can outpace whatever losses are inflicted from inbreeding depression. This is the reason inbreeding has received positive acclaims and negative criticism.

Inbreeding coefficients are derived by Council on Dairy Cattle Breeding (CDCB) routinely for any animals having a U.S. genetic evaluation. Coefficients are determined by pedigree and (if tested) by genomics. Genetic predictions are adjusted to account for effects of expected future inbreeding. Breeding values are increased for bulls that will produce less inbreeding and decreased for bulls that will result in more inbreeding. The inbreeding coefficients are forced to zero for animals born in 1960 to set a clear starting point. Any inbreeding before 1960 was difficult to compute accurately because of limited data in the pedigree files.

Average inbreeding for all the dairy breeds increased by 7 to 9% over the next 60 years (1960-2020). The level of inbreeding is highest for Jerseys, but the rate of increase is largest for Holsteins.

Are today’s cattle more susceptible to diseases than they were 50 years ago if their parents are related?

It might seem that way because the list of fertility haplotypes and genetic diseases continues to grow. What is really changing is our ability to identify harmful alleles that were already in the population.

Usually animals are more confined than plants, which has helped immensely in limiting the spread of biological agents. Because there is inadequate knowledge of differences in resistance, any effort to increase genetic resistance in the animal population has been limited. We do know from scientific studies that more diversity in immune gene regions of an animal’s genome are associated with better health, so diversity is likely to enhance resistance to some diseases. Innovative tests that reveal some knowledge of individual resistance to several of these biological organisms will hopefully be developed in the future.

Solutions to limit increase in inbreeding 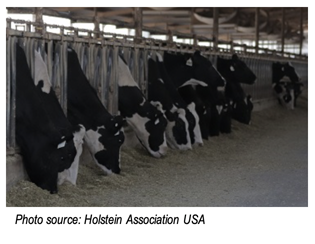 Despite the changes in the dairy population from genetic selection, there appears to be little decline (if any) in the genetic variation for performance traits. Nevertheless, it is a worthy goal to limit the increase in future inbreeding and two of the most effective ways is to strive for more genomic testing, i.e., screening more animals, and rely on mating programs that avoid excessive inbreeding on each individual mating.

Mating programs are offered to producers by some breed associations and AI organizations to help maximize future daughters’ performance by curtailing inbreeding depression in resulting offspring. These normally help to avoid undesirable recessives (particularly haplotypes impacting fertility and genetic abnormalities). Producers who opt for these programs might wish to disregard any programs that restrict access to hundreds of AI bulls simply because the organization offering the service recommends matings only to their own bulls.

An alternative that eliminates most inbreeding is crossbreeding. This practice has been tried in several dairy herds and has helped slow the rise in the average inbreeding coefficient in some breeds.

As a last resort, there are opportunities to reinsert lost alleles back into the population from repositories of frozen semen and embryos, initiated as safeguards against unforeseen developments.

Genetic improvement within the dairy industry exemplifies one of the most successful stories in the production of our food supply. Because of this success, there is a reason to expect that many of the genetic practices being used will continue. However, continued attention to inbreeding using practices cited in this article can help slow the gradual rise that will continue to take place.

For the last half century, U.S. animal agriculture has focused primarily on improving productivity, efficiency and throughput, resulting in increasing supplies of commodities that have helped assure a safe, abundant U.S. food supply and growing [Read More …]

The drive for genetic selection means cattle are increasingly vulnerable to deadly new epidemics that could emerge as the climate warms Known for their distinctive long horns, the Ankole cattle of western Uganda have evolved [Read More …]