New results from IFCN Top 20 Milk Processors List 2018 shows that 25.4 % of produced milk worldwide is processed from top 20 dairy giants. The total collection of top 20 milk processors rose steadily from 200 in 2015 to 211 million tonnes of milk in 2017. Like the 2016 ranking, Dairy Farmers of America topped the list in 2018 with 29.2 million tonnes milk intake holding 3.5% of the total market share of world’s total milk production. Top 3 Leaders DFA, Fonterra, Lactalis of the list stay stable their positions compared to the previous ranking in 2016.

Saputo increased intake by about 2.1 million tonnes milk through the acquisition of the Australian Murray Goulburn company.

Amul from India is a new entry in the Top 10 ranking in 2018 with 9.3 million tonnes milk enjoying shifting from 13th to 9th position since previous ranking in 2016. This shift was driven by growing milk intake and the fact that IFCN decided to standardize milk intake from natural content to 4 % fat and 3,3 % protein. 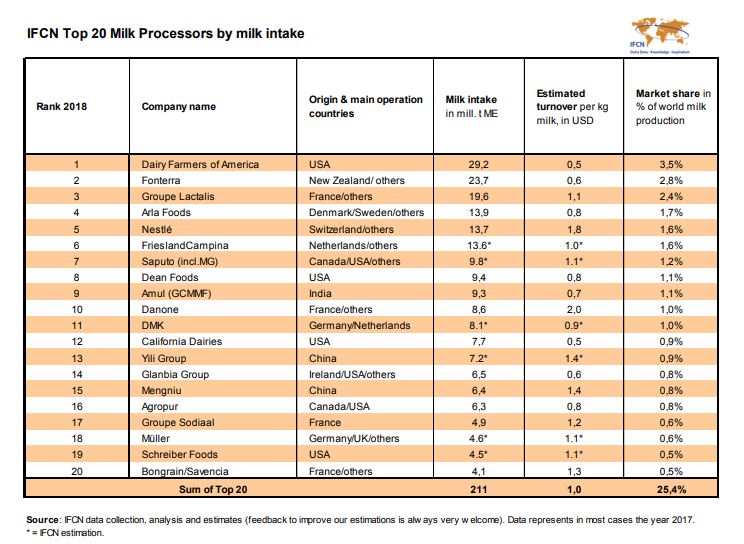 Explanation of variables: 1. Milk intake represents milk volume collected and dairy commodity purchases (in milk equivalent) for the main company and its subsidiaries. Milk intake figures in mill tons. In some cases recalculated from litre (1litre = 1.033 kg). In the milk intake a double counting is possible once a processor sources milk from a collecting cooperative (e.g. DFA) or is sourcing milk in form of dairy products. This means that the total milk volume of the top 20 processors can be overestimated. Content of milk intake (fat and protein level) can be underestimated in some countries such as New Zealand and The Netherlands. 2. Turnover per kg milk: Dairy turnover divided by milk intake. This indicator gives an indication of value creation per kg of milk processed. This figure shall be interpreted with care as the precise number is difficult to define and a direct comparability between companies is limited. 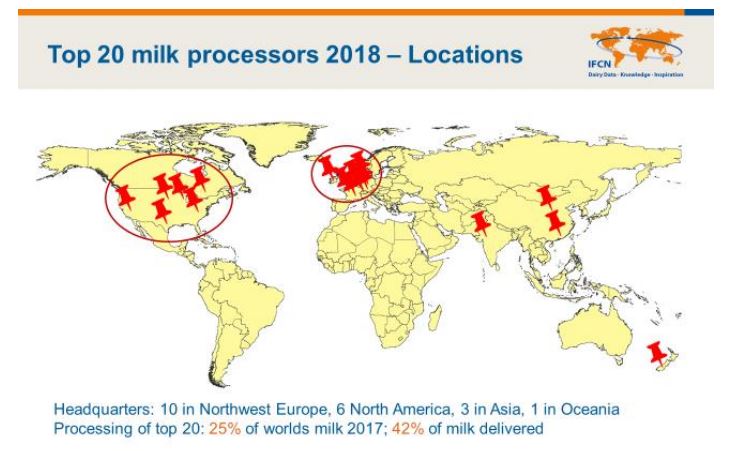 A team of food science students from Brigham Young University won the 2018 Idaho Milk Processors Association new product competition Saturday. They not only earned some serious bragging rights, but $10,000, too, at IMPA’s annual meeting in Sun Valley, [Read More …]

The U.S. Department of Agriculture (USDA) this year announced plans to purchase up to $135 in cheese and, for the first time ever, pasteurized fluid milk for delivery to food banks across America. IDFA collaborated [Read More …]

According to IFCN’s latest research, Saudi Arabia and China have the largest dairy farming enterprises in the  world. China holds half of the top 10 list, while the rest of the companies are located in [Read More …]