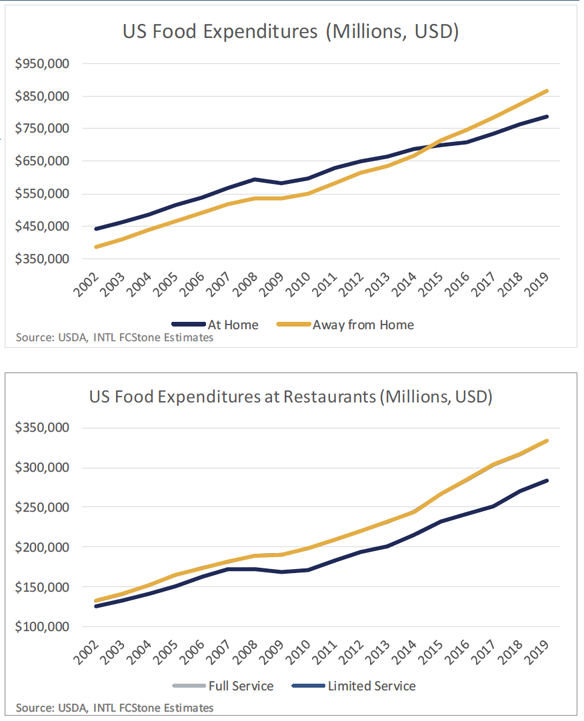 In 2015 the amount of money US consumers spent on food away from home exceeded the amount they spent on food at home for the first time on record. While the USDA hasn’t released the data yet, we estimate that 52.4% of US food expenditures (excluding alcohol and gratuities) were on food away from home in 2019. The obvious fear is that covid-19 will reduce the number of visits to restaurants and consequently reduce overall dairy demand.

According to Black Box Intelligence, restaurant sales in Seattle were down about 20% during the first full week of heightened awareness of the spreading virus. High-end and full service restaurants appear to be getting hit harder than quick serve and to-go service. They reported that to-go sales were actually up by 10.5%. It’s likely that we’ll see drive-through, to-go, and food delivery sales get a positive bump from the covid-19 concerns while in-restaurant/sit-down sales take a big hit. It all probably nets out to a net negative for food service sales, but the hit will not be evenly distributed across restaurant types and food categories. Delivered pizza seems very well positioned and that could help to damp-en the impact on the cheese market.

This next paragraph might be boring, but we gotta do it. I’m getting a lot of requests to compare the current situation to 2009 and people are surprised to see that US dairy consumption was up 2.0% in 2009. “Demand” is driven by a number of things including the price of dairy products. In 2009 the US all milk price fell 30% from 2008. Yes, the re-cession reduced total demand, but more volume cleared thanks to the lower price. If you can remember Econ 101, it’s the difference between “demand” and “quantity demanded”. So when we analyze the impact that covid-19 is 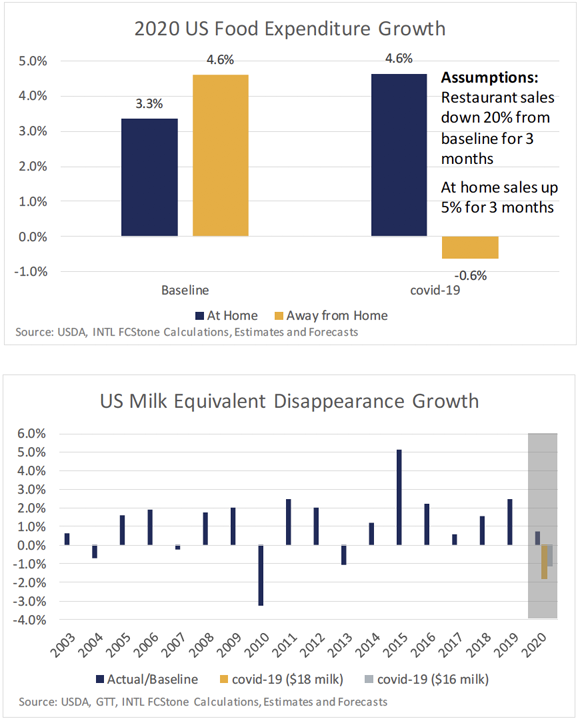 expected to have on the dairy market it’s important to recognize that covid-19 is reducing “demand”, which should drive prices lower, but then the lower prices boost “quantity demanded” and partially offset the weaker “demand”.

I put together some models connecting expenditures on food at home/ away from home, dairy prices and total milk equivalent consumption in the US. The baseline forecast assumes trend-line growth which would put food sales at home up 3.3% and food away from home up 4.6% with total food sales up 4.0%. For the covid-19 scenario I assumed food service sales would be down 20% for March/April/May and food at home expenditures would be up 5% during those months. That would put home consumption up 4.6% and food service down 0.6% for the year while total expenditure up 1.9%. If we assume a $18.00/cwt. all milk price, that would put total milk equivalent consumption down 2.5% from baseline. The big drop in demand would drive prices lower, so if we assume a $16 milk price, consumption would only be down 1.8% from baseline.

If restaurant sales are down 20% for 3 months nationwide, I think it’s reasonable to assume total milk equivalent disappearance is going to be down 1-2% for the year. That would likely reduce dairy prices by about 15% from what they otherwise would have been. The question is, will restaurant sales actually be down that much nationwide? I heard a re-porter over the weekend who said downtown Seattle was a ghost town, but restaurants in a suburb (Tacoma) still appeared full. Although this week Illinois has decided to shut down all sit-down service at restaurants and bars, so maybe an assumed 20% decline is too low.

Major disruptions in the cattle and hog markets, one of the several fallouts of the COVID-19 pandemic, have led to many conversations about policy options that might be helpful. One much-discussed solution is mandatory country [Read More …]