Jobs and economic growth are on the line—and not just for dairy—when Congress considers the U.S.-Mexico-Canada Agreement (USMCA).

The ability to export U.S. dairy products and ingredients to Mexico and Canada is vitally important for the economic future of American dairy farmers, processors and the millions of jobs the U.S. dairy industry supports.

Dairy is hardly alone. The infographic below shows how important North American export markets are to other U.S. food and agriculture industries. 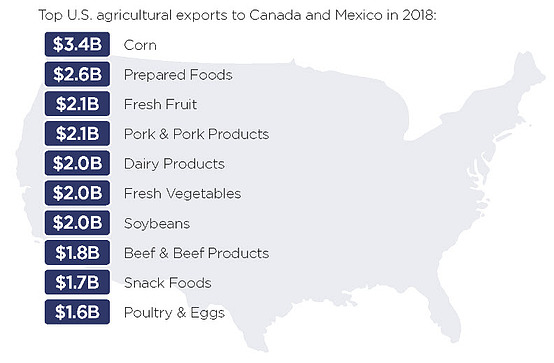 Chart source: The U.S. Food and Agriculture Dialogue for Trade

The data comes from The U.S. Food and Agriculture Dialogue for Trade, an organization of more than 200 U.S. food and agriculture companies and associations, including the U.S. Dairy Export Council.

To quantify the impact of trade with Canada and Mexico, the coalition aggregated its members’ data and found:

The numbers underscore the importance of the U.S.-Mexico-Canada Agreement. USMCA was signed by presidents of the three countries but now needs ratification by all three legislative bodies in order to become law.

If that happens, the new USMCA would replace NAFTA.

“We shipped $1.4 billion in dairy products to Mexico last year, which accounts for more than one-fourth of U.S. dairy exports,” said USDEC President and CEO Tom Vilsack in a joint news release with the National Milk Producers Federation.

“Without a trade treaty with Mexico in place, the dairy industry would be hard pressed to maintain and expand these sales, as our competitors in Europe are expected to implement a lucrative new trade arrangement with Mexico by next year. Moreover, without USMCA we lose out on the new rules this deal puts in place for key reforms to Canada’s dairy system.”

The importance of Canada and Mexico to U.S. Food and Agriculture 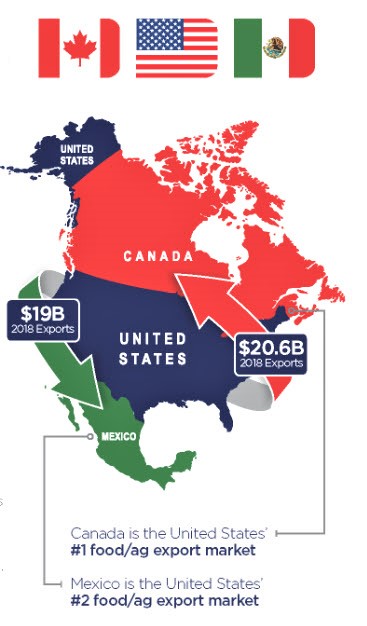 Chart source: The U.S. Food and Agriculture Dialogue for Trade

On April 18, the U.S. International Trade Commission (ITC) released its economic analysis of USMCA, prompting other presidents heading agriculture-based associations to speak out, including:

The U.S. Food and Agriculture Dialogue for Trade has summarized  the recent International Trade Commission report and what USMCA does for U.S. food and agriculture producers.

Those summaries are below.

Summary: What USMCA Does for U.S. Food and Agriculture Producers

Update on Cheese Exports and Imports

Because the export/import data is complex to analyze, this post will deal only with cheese exports and imports.  Cheese prices are dependent on the size of cheese inventories.  More inventory results in lower cheese prices.  [Read More …]

Today, American Farmland Trust joins other major agriculture and conservation organizations at a “Learning Lab” for the U.S. Climate Alliance Natural and Working Lands Initiative. A team of over 50 technical experts from government, academia [Read More …]

Export/import data is now available through September.  This post will deal exclusively with cheese analytics.  Cheese prices are linked very closely to the Class III milk price.  This is illustrated in Chart I and the [Read More …]