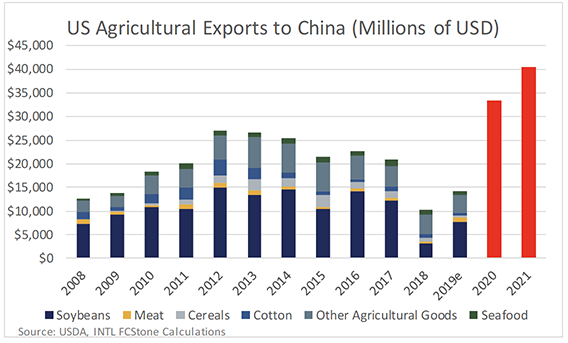 I’m jumping on the bandwagon with the people who are skeptical that China will live up to commitments made in the “Phase One” trade deal signed with the US this week. I guess I need to qualify the statement though because there are parts of the agreement that likely will be implemented. The dairy fact sheet released with the trade agreement text lists the following changes for US-China dairy trade:

There were also some changes around Infant formula regulations. My guess is, these changes to the sanitary rules around US-China dairy trade will be implemented and will help to boost US dairy exports to China a little over time. The skepticism is around China’s agreement to increase purchases of US goods. China has agreed to buy 12.5 billion dollars more agricultural products from the US in 2020 than they did in 2017, and 19.5 billion more in 2021. There are supposedly specific targets that have been laid out for the major commodities, but those details are being with-held from the general public. 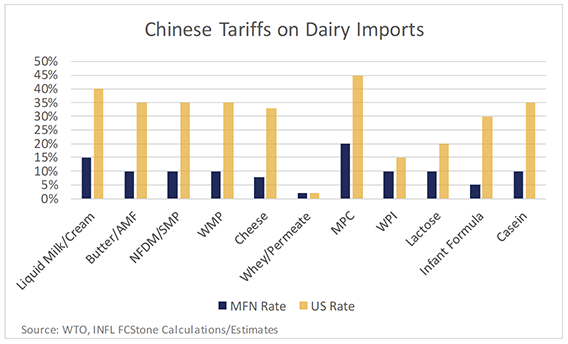 When you look at the graph on the previous page showing historical agricultural exports to China and the proposed 2020 and 2021 it looks a bit ridiculous. But China is importing somewhere around 130 billion dollars worth of agricultural goods, could they shift from buying $20 of that from the US to $40 of that from the US? Sure they could, if the price was right or their will to make the shift was strong. But the will does not seem strong and the price (currently) isn’t right. During the press conference after the signing ceremony the Chinese Vice Premier Liu He indicated that Chinese firms will buy American goods “based on market conditions”. So it doesn’t sound like the Chinese government is going to make a big push to get Chinese companies to buy US goods and the Phase One deal doesn’t remove any of the existing tariffs which make most US products less competitive.

So China won’t be importing more US dairy products by government fiat, and as long as the retaliatory tariffs stay in place, they won’t be im-porting substantially more US dairy based on prices.