Last week, USDA released both its biannual U.S. cattle inventory report showing U.S. cattle totals as of July 1 and its monthly Cattle on Feed report. The reports provide inventory data for the nation’s cattle herd, including estimates of the

number of breeding animals for beef and milk production, as well as the number of animals placed on feed every month. In a world wracked with COVID-19 uncertainty, these two reports largely fell in line with analysts’ expectations. The inventory report showed all cattle and calves relatively even with a year ago, while the monthly on-feed report showed cattle on feed slightly below a year ago.

Overall, the July cattle inventory report does not show any dramatic changes in the trajectory of the cattle industry at this point in the year. The COVID-19-induced backlog of cattle does make interpreting the numbers in this report a bit more challenging. As of July 1, all cattle and calves in the U.S. totaled 103 million head, slightly above the 102.9 million head reported for July 1, 2019. Of that inventory, all cows and heifers that have calved totaled 41.1 million head. Beef cows dropped slightly from last year, coming in at 32.05 million head compared to 32.3 million head in 2019, while milk cows were up by 50,000 head over 2019. Both steers and heifers weighing 500 pounds and over were up from 2019, with heifers increasing by 100,000 head and steers increasing by 300,000 head. These numbers tell us that the beef heard is still contracting and, based on placements noted in the report, likely will not expand any time soon. Overall, this report, which was mostly in line with analyst expectations, does not show a dramatic increase in liquidation of the herd as a result of COVID-19. It does point to a continued slow tightening of the cattle inventory. 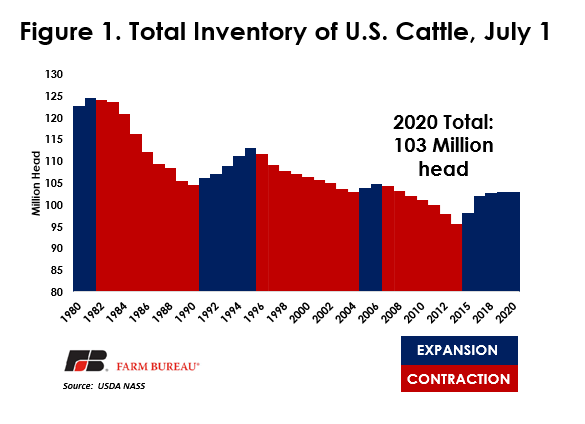 Similar to the inventory report, the Cattle on Feed report came in relatively close to analyst expectations. This report showed a total inventory of 11.438 million head on feed in the United States on July 1. This slight year-over-year decrease is right in line with analysts’ expectations of an average decrease of 0.1% in feedlot inventories. This July inventory is the second-highest July 1 inventory since the series began in 1996, coming in only below 2019. 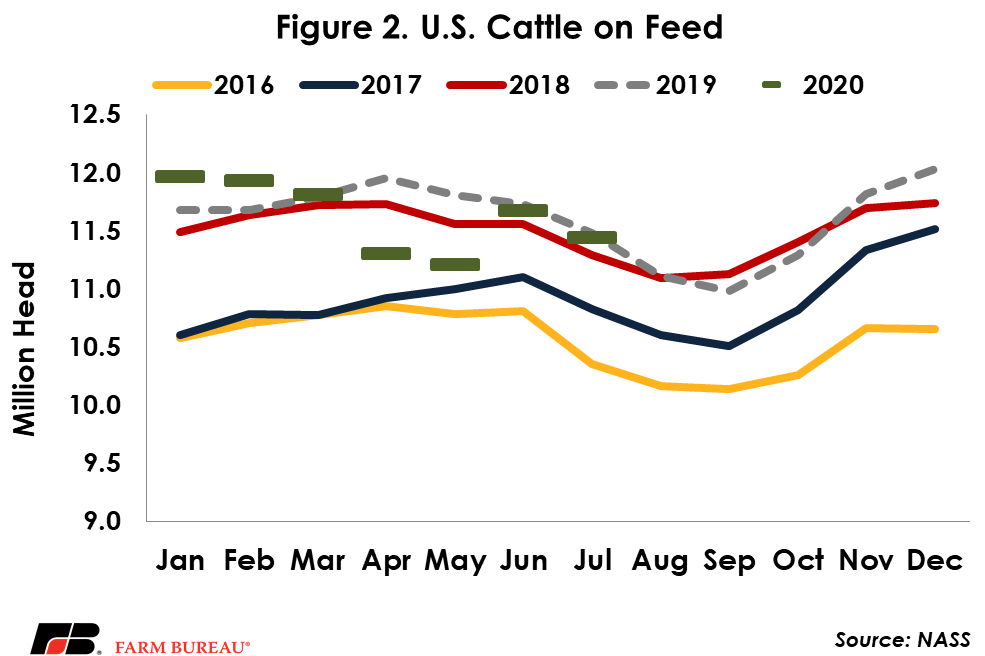 While total inventories are an important component of the report, other key factors include placements (new animals being

placed on feed) and marketings (animals being taken off feed and sold for slaughter). Marketings in June were 1.969 million head, up around 1% from a year ago, matching the average analyst expectation of a 1.1% increase. This marketing number is yet another sign that slaughter capacity has largely recovered, and packers are operating at near or above year-ago levels. There was a great degree of uncertainty in analysts’ expectations for the placement number, resulting in a relatively large range of a 0.1% increase to an 8% increase. Placements in June totaled 1.798 million head, 2% above 2019 levels but below the average analyst prediction of a 3.9% increase. The placements and marketing numbers were relatively close to pre-report expectations and did not result in major market reactions.

One uncertainty hanging over the industry is the status of feedlots under the backlog of fed cattle that developed during the disruptions at the slaughter plants. The estimates of cattle on feed over 120 days is still very large, but the number appears to be decreasing (Figure 3). This indicates that the backlog is decreasing, but it will still be a little while before feedlots are current because a large number of cattle remain backed up in the system. 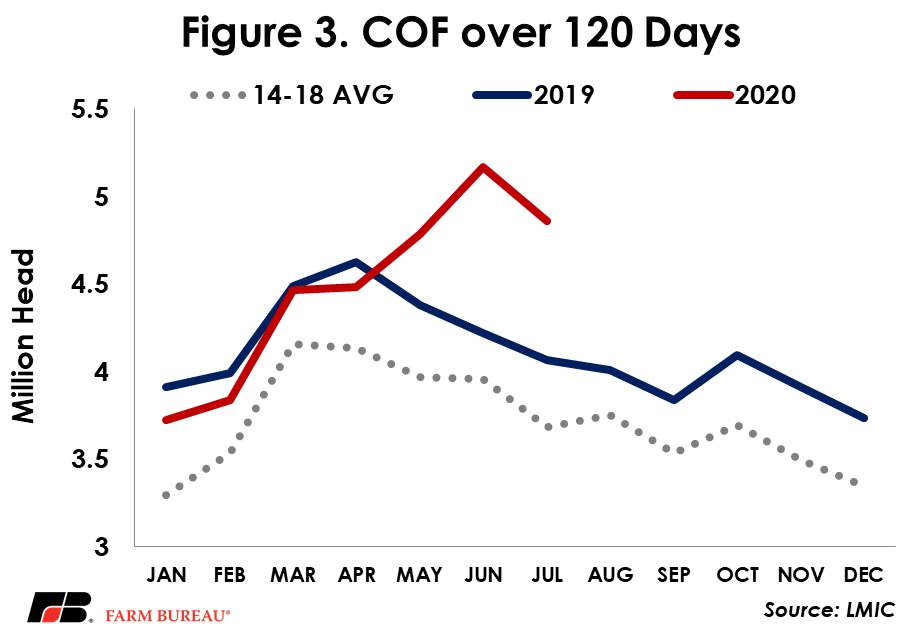 These two reports largely fell in line with expectations and did not result in any large market reactions, a refreshing result in an era wracked with COVID-19 uncertainty.  The cattle inventory is largely in line with year-ago levels, as are total cattle on feed. Though it will still be a few months before the feedlot sector is current, there is a slight decline in the backlog from last month.

USDA’s latest Cattle on Feed report, released August 21, shows the number of animals on feed has moderately increased from 2019. The report provides monthly estimates of the number of cattle being fed for slaughter. For the [Read More …]

AFBF has made the difficult decision to cancel this year’s Young Farmers & Ranchers Conference out of an abundance of caution and in the interest of the health and well-being of our members, staff, and [Read More …]

Working Together to Strengthen the Lives of Rural Americans: American Farm Bureau President Joins Connected Nation Board of Directors

American Farm Bureau Federation (AFBF) President Zippy Duvall may lead one of the nation’s largest and most prominent nonprofits, but at heart he’s a third-generation farmer from Georgia. Duvall is someone who advocates for and [Read More …]