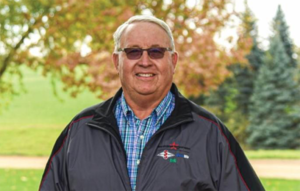 The CentralStar Cooperative board of directors recently selected Ken Gasper of Belding, Michigan as the 2020 Pioneer Award recipient. Established in 1977, the Pioneer Award recognizes individuals who through selfless and dedicated service and leadership have provided the cooperative and its members greater prosperity.

“Ken was a visionary leader for our cooperative,” said Paul Trierweiler, CentralStar board president. “His ability to encourage the board to think outside-the-box allowed the cooperative to expand service offerings to provide useful tools to producers which ultimately helped improve farm profitability.”

As board president, Gasper led the organization through many changes including transitioning to a stock-based cooperative. At the same time the cooperative grew beyond being singularly focused on genetics and reproduction, with the addition of Dairy Herd Information (DHI) services; dairy records analysis and consulting, diagnostic testing through the creation of AntelBio, and herd management products. As a result of these improvements the cooperative’s sales revenues grew by more than $10 million in a shrinking customer base.

National Dairy Shrine is honoring four respected individuals with its Pioneer Award this year in recognition of their significant contributions to the dairy industry. Among the 2020 honorees is Randall A. “Randy” Geiger (1950-2019), the [Read More …]

Four respected individuals are being honored this year with National Dairy Shrine’s Pioneer Award in recognition of their significant contributions to the dairy industry. They join a distinguished group of industry leaders whose portraits are [Read More …]

Four outstanding individuals are being honored with National Dairy Shrine’s Pioneer Award this year in recognition of their significant contributions to the dairy industry. The four will join a distinguished group of industry leaders whose [Read More …]