Many plants are keeping busy schedules as they attempt to compensate for last week’s closures, while displaced spot loads of milk and cream continue to search for homes. 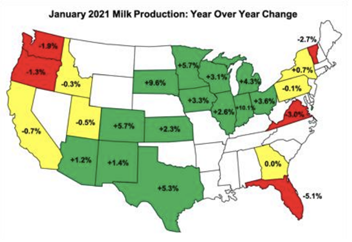 Last year’s milk production growth carried into 2021, albeit at a slower pace. According to USDA’s Milk Production report released on Tuesday afternoon, national milk production rose by 1.6% in January, the lowest year over year increase seen since June 2020. Most of the growth was driven by an expanding national dairy herd, as producers added an estimated 8,000 head of cows between December and January. But improved productivity played a hand in the increase as well with yields rising by 0.6% year over year, equivalent to an additional 13 pounds of milk per cow.

The 1.6% increase was lower than most analysts’ predictions. Surprisingly weak production in key dairy states like California and Idaho – which saw milk production contract for the first time since 2017 – weighed on the national figure. The report also made some important revisions, both to national and state level data. In particular, the 3.2% increase in California’s December milk production published last month was reversed to a 0.5% decline in Tuesday’s report. 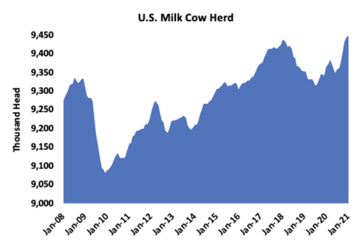 Though last week’s horrific weather has largely become a memory, its impact on the dairy sector has not. Many plants are keeping busy schedules as they attempt to compensate for last week’s closures. Meanwhile, displaced spot loads of milk and cream are still moving around the country searching for homes. Especially in Texas, the storm’s impact on milk production, and particularly yields, has yet to be fully realized. Nevertheless, milk for manufacturing remains abundant in most areas. Midwest spot milk could be obtained last week with discounts as large as $7/cwt. below Class III prices, larger discounts than what were available the week prior.

Generally speaking, cheese manufacturers continue to turn out product at a healthy clip and are playing a key role in absorbing excess milk from the market. Given the robust production seen since the 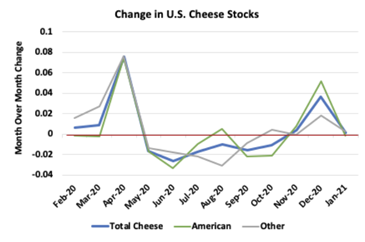 beginning of the year it was somewhat surprising to see that at 1.4 billion pounds, total cheese inventories at the end of January were only 2.2 million pounds, or 0.2%, greater than at the end of December. Last year, total cheese stocks increased by 31.6 million pounds over this same period. Perhaps even more surprising was the 0.1% drop in American cheese stocks, indicating that the increase was driven by growing inventories of Swiss and Other types of cheese.

CME spot Cheddar blocks were able to gain some ground this week, posting price increases on Monday, Wednesday, and especially Thursday when the market jumped 7¢ while 11 loads traded hands. Some of these gains were erased on Friday, however, when blocks gave up 4.25¢. Nevertheless, the market ended the week at $1.6175/lb., an increase of 8¢ compared to prior week. Barrels were a bit more fickle, losing 3¢ on Tuesday’s trade, only to move up by 6.5¢ on Thursday, before retreating again on Friday. When all was said and done, CME spot Cheddar barrels closed today’s session at $1.42/lb. just .75¢ higher than last week. 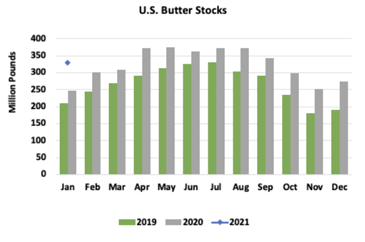 In the last week during which old crop butter could be traded at the CME, the spot market bowed under the pressure. Following a surprising rally during last Friday’s session, spot butter prices lost ground over most of the week with the only exception being a 3.25¢ gain on Thursday. This was not enough to undo the losses, however, and the market closed on Friday at $1.47/lb., down 8¢ from last week. Appetite for cheap butter persists, however, as an astonishing 51 unfilled bids were left on the board at the conclusion of today’s spot trade. Butter inventories also grew over the turn of the year, rising to 328.4 million pounds at the end of January. Though the 54.6 million pound build was seasonally typical, butter inventories remain heavy by historical standards. Stocks at the end of January were the largest for that time of year since 1993. 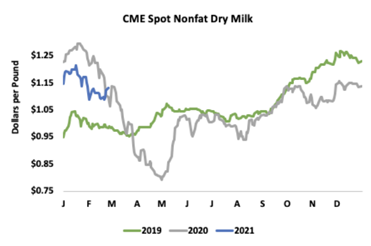 The nonfat dry milk (NDM) market continues to be weighed down by heavy supplies. Manufacturers report that condensed skim for dryers remains abundant, particularly as balancing plants faced the most severe interruptions from last week’s inclement weather. U.S. product remains competitively priced compared to global suppliers, but manufacturers report that export interest has been inconsistent. Spot NDM was able to make a bit of headway during the week with prices rising in four of the week’s five sessions. Friday’s trade ended at $1.1325/lb., an increase of 4¢ versus last Friday with 27 loads changing hands during the week.

The spot whey market managed to build on prior gains to move even higher this week. After starting the week unchanged on Monday and Tuesday then balking slightly with a quarter cent decline on Wednesday, the market staged its rally, rising by .25¢ on Thursday and a full penny on Friday. This brought the Friday price to 55.75¢/lb., a 1¢ increase versus last week. Demand for higher protein products continues to pull the whey stream away from dry whey production, keeping supply limited. Meanwhile international demand remains robust, even as logistical challenges persist.

Milk futures were on the move during the week, following the ebbs and flows of the spot trade. Following a relatively uneventful Monday, Class III milk futures dipped on Tuesday as spot barrel prices slipped. The decline was short lived, however, with gains seen on Wednesday and especially Thursday as blocks rallied, with the APR21 contract finishing limit up. With a mixed settlement on Friday, most contracts beyond MAR21 appreciated over the balance of the week. Class IV milk futures were relatively quiet for most of the week though Thursday’s spot butter gains breathed a bit of life into the 2021 contracts.

USDA’s Outlook Meeting, held late last week, included predictions of large corn and soybean crops in the 2021/2022 market year driven by increases in both area and yield. But strong supply is expected to be countered by solid demand, namely continued grain and oilseed shipments to China. Corn futures moved up on Monday and Tuesday, before retreating on Thursday and Friday. Most nearby contracts gave up a few cents over the course of the week. Soybeans followed the same trend but larger gains earlier in the week meant that most nearby contracts settled a few cents higher on Friday than on Monday.

USDA staff in regional, state and county offices stand ready and are eager to help The U.S. Department of Agriculture (USDA) reminds communities, farmers and ranchers, families and small businesses in the path of Hurricane Dorian [Read More …]

WASDE Weighs in on Soybean Tariffs

Historically, the changes in supply and demand that follow updated plantings of major field crops detailed in USDA’s survey-based June Acreage report are the focus of the department’s July World Agricultural Supply and Demand Estimates. However, this year [Read More …]

The U.S. Department of Agriculture (USDA) announces plenary speakers for the 2020 Agricultural Outlook Forum (AOF), to be held Feb. 20–21, 2020, in Arlington, Va., under the theme “The Innovation Imperative: Shaping the Future of [Read More …]