After three generations in my family, we’re delighted to turn over to new ownership our Holstein World magazine.  We congratulate Purebred Publishing, the purchaser.  Based in Columbus, Ohio, this group is committed to breeders of purebred cattle, already working with the official publications of the Guernsey, Brown Swiss, Ayrshire and Milking Shorthorn breeds. As they expand their service to livestock breeders, we’re very pleased that they see working with Holstein breeders, and the World magazine, as an important next step in their growth.  The full announcement can be seen here.

As our issue of January 2018 came off the presses, it occurred to me that it was in January 1904 when the very first issue of Holstein-Friesian World was published.  My grandfather, E. M. Hastings, a founding partner, was on the masthead and wrote the editorial in that issue. 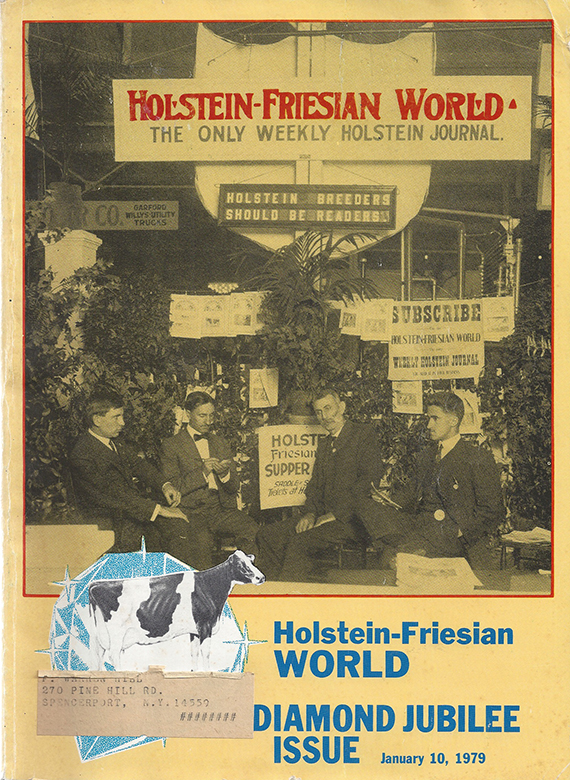 What he said then, still applies: “We can conceive of nothing that should tend to advance the interests of a breed, or enhance the profits of the breeder, equal to the right kind of paper devoted to those interests.”

Fifty years later, in January 1954, Maurice Prescott, the editor and publisher of Holstein-Friesian World wrote the editorial in the anniversary issue.  He was my maternal grandfather and World editor for over 60 years until his passing in 1976. He was succeeded by his son, my uncle, as publisher, W. T. “Ted” Prescott, and by my father, his son-in-law as editor, R. H. “Bob” Hastings.

Editor Prescott wrote: “We take this opportunity to thank publicly our many friends who have extended felicitations on our Golden Jubilee.  May we say on this occasion that through the years the Holstein industry has been kind and charitable towards our efforts with the World.  We have tried to make it a magazine for breeders.  We have tried to stress the human angles of the business and broaden interest beyond the local field…”

He said it well and we share these sentiments.

Personally, I’m very grateful for the help, advice, counsel, support and friendship extended by so many generous folks in this industry.  We especially appreciate a long and productive relationship with the Holstein Association and its dedicated leadership, past and present.  The World has also been the beneficiary of the talents of many skilled staff whose commitment to Holstein breeders was and is unwavering.

For the future, we look forward to the new opportunities represented by this DairyBusiness Digital magazine, delivered twice each month, and our related products relying on the Internet.  We are excited about several new projects now in development.

It is indeed a privilege to work in our challenging, yet so rewarding dairy industry.

Rabobank’s Ben Laine on the changing landscape of U.S. dairy

Dairy One, DHI testing, And The Coronavirus Pandemic

This Week in Dairy March 23