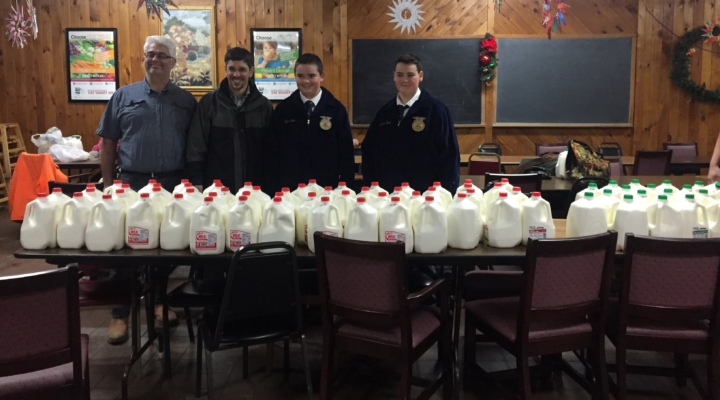 When making a donation, people are typically focused on the recipient of the donation. It is not often that the donation can benefit those receiving the donation, as well as where the donation originated from. When the members of the Madison FFA decided to donate milk to the Rome Rescue Mission, they knew it would benefit both the recipients, and the dairy farmers who produced the milk.

Annually the Madison FFA donates 35 hams to the Madison-Hamilton Interfaith Council to include with their holiday food basket distribution. This year the Officer team wanted to do more. They decided to take the proceeds from a planned fundraiser and use those funds to purchase milk to donate. In order to make their money go even further, they contacted Byrne Dairy and Stewarts Shops who each donated milk to supplement the milk purchased by the students.

The FFA Chapter purchased 68 gallons of milk to donate; this was supplemented with a donation of 24 gallons from Stewart’s Shops and 28 gallons from Byrne Dairy allowing a total of 120 gallons of milk to be donated to the Rome Rescue Mission on Wednesday, December 19, 2018. This milk was given to their clients to bring home to their families and used in the Rescue Mission for meals and food preparation.

At a time when milk prices continue to drop, a time when dairy farmers struggle more than they ever have before, any boost to dairy consumption benefits dairy farmers. In spite of these recent struggles and the loss of some family farms, New York State is the third largest dairy producer in the nation. Dairy remains the largest segment of the State’s agricultural sector. As future leaders in agricultural industries, the members of the Madison FFA know the importance of supporting this large, vital industry that contributes so much to the economy – both locally and statewide.

“I am very proud of our students. They identified two needs, the lack of fluid milk donations to the Rescue Mission and other local food pantries and the need to support our dairy farmers.” Said Paul Perry, Madison Central School AgriScience teacher and FFA Advisor. “The students were able to identify a single activity that they could meet both of these needs. The leadership that they showed in planning and executing this activity, all while thinking of others demonstrates that these students are getting ready for the kinds of questions and challenges that they will need to solve in their future. They embraced the National FFA Motto of ‘Learning to Do; Doing to Learn; Earning to Live; Living to Serve’ with this activity. The impact of this donation will be felt long after these families finish drinking this wholesome, nutritious milk.”

This year’s New York State Fair butter sculpture has been revealed. The sculpture, which pays tribute to New York dairy farmers, is entitled “Your Milk Comes From A Good Place” and depicts a farmer delivering [Read More …]

Keytone Dairy plans to boost production and exports to China with the $15 million it raised ahead of its expected float on the Australian share market. The New Zealand-based dairy company – which sells milk [Read More …]