Below ground pests can be challenging in corn production (grain or silage), particularly when it is grown in the same fields year after year.

Below ground insect pests can be challenging to control. In common field crops of Pennsylvania, they can occur in soybeans, small grains, or hay, but tend not to be too problematic in these crops. By contrast, below ground pests can be challenging in corn production (grain or silage), particularly when it is grown in the same fields year after year. Other than continuous corn production, underground pests tend to be sporadic in corn fields that have been rotated annually—some fields have the same pest year after year and others do not have any issues. Many of these pests cause similar symptoms including missing, wilted, or stunted seedlings. The best way to determine if soil-dwelling pests are causing problems in your fields is to scout for them by digging up damaged seedlings or poorly established sections of rows to inspect roots and look for damage.

Generally, the longer the crop rotation, the fewer below ground insect problems. Longer rotations host a larger variety of plant species through time and few insect pests can feed on all the crop species in a rotation so pest populations do not build when their development is disrupted. By contrast, planting the same species year after year gives pests easy access to a predictable food source and their populations will build with time. Should you have problems with below ground insect pests, most species can be controlled with soil- or seed-applied insecticides. Bt traits in corn hybrids are only useful below ground for root worms, but keep in mind that control tactics are only useful when pest populations are present. Moreover, in wet years, insecticides, particularly the neonicotinoids, can be less effective because they are water soluble and can be diluted out of the root zone, decreasing efficacy. Always identify your pest species first and use appropriate controls. Below are summaries of the most common belowground insect pests in Pennsylvania corn fields. 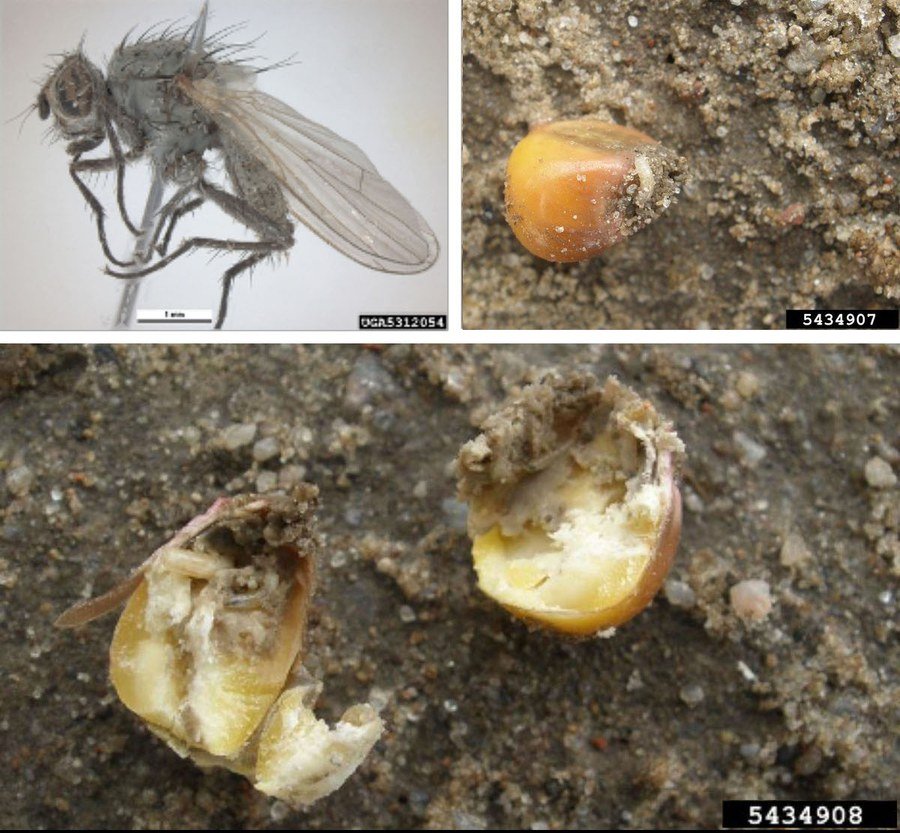 Seed corn maggot is primarily a pest in tilled corn fields. In rare cases, it can attack soybeans, but again typically in tilled fields. Seed corn maggot can complete 3-5 generations per growing season (Figures 1 and 2) but of course the generations that align with crop establishment are most problematic. Adult flies lay eggs in fields, and maggots burrow into the seed, destroying the seed germ, but they can also attack underground stems. Seed corn maggots prefer decaying organic matter, so there is a higher risk after tilling manure or cover crops into the soil. No rescue treatments are available for seed corn maggot; however, in tilled fields, the risk of seed corn maggot can be reduced by planting at least two weeks after tillage to allow organic matter to break down. Alternatively, farmers can decrease their risk from seed corn maggot by planting shallowly in warm soil, which allows seeds to germinate quickly. Another option is to plant during the fly-free period. This requires calculating the growing degree days, with a base of 39°F, to determine when the maggots will be present and potentially cause feeding damage (Figure 3). Seed corn maggot is easily controlled with seed or soil-applied insecticides at planting. 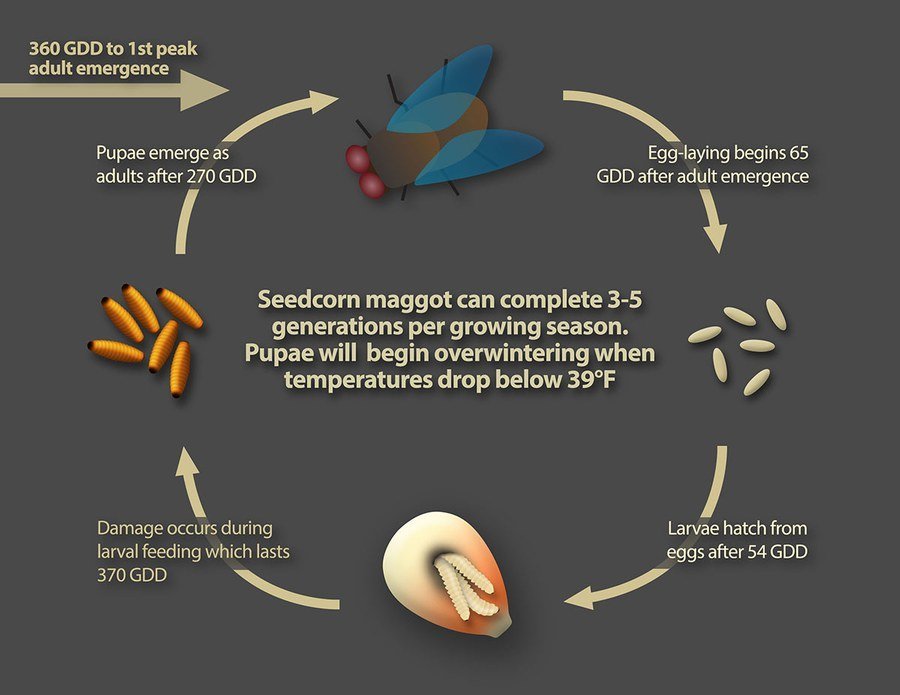 Wireworms are larvae of click beetles (Figure 4). Females lay eggs in grassy areas or cultivated fields, making corn at a higher risk when it follows hay, pasture, or alfalfa. The larvae take 2-3 years to develop and have overlapping generations. Due to their long development time, wireworm issues can persist for multiple years, but most fields in Pennsylvania are never colonized by significant populations of wireworms. Wireworm larvae feed on below ground plant tissue, boring into stems and roots. Spring tillage can help decrease wireworm damage and they are easily controlled with seed or soil-applied insecticides at planting.

White grubs represent multiple species of scarab beetle larvae. This includes Japanese beetles, European chaffers, and June beetles (Figure 5). Not all white grubs are pests. Some species are manure feeders. Unless they are in the root zone, they are unlikely to be pests. Larger species are more concerning due to the amount of feeding damage they can cause. The different species can be identified based on patterns of hairs on the tip of their abdomens, and this information can be easily found through various online resources. 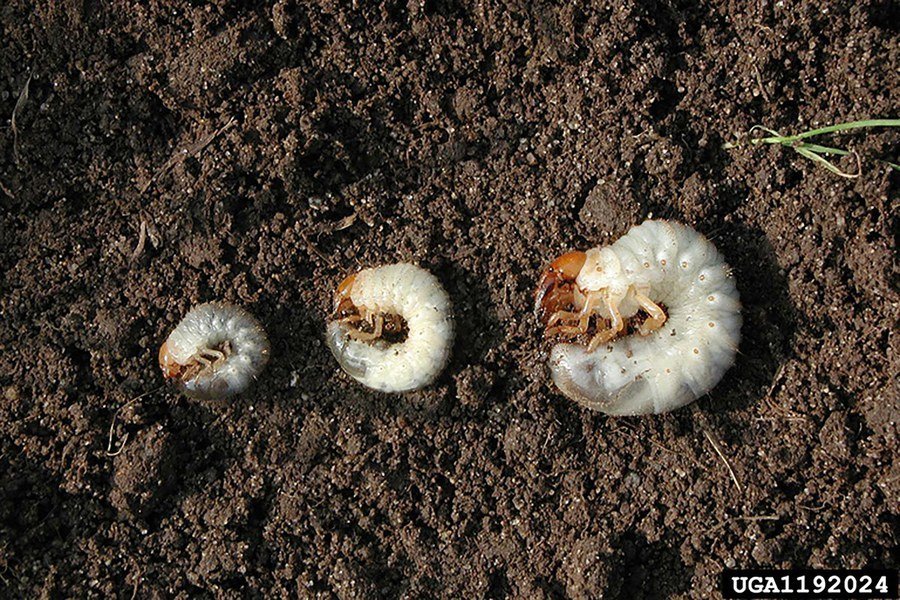 White grubs feed on roots and are more likely to damage corn that follows alfalfa, hay, or pasture. Symptoms include missing, wilted, or stunted seedlings. Most fields never see infestations, but some fields are regularly infested. White grubs can be controlled with seed- or soil-applied insecticides at planting.

Slugs are most abundant in long-term no-till fields, and eat virtually all crops (Figure 6). They inflict most damage to seeds and seedlings during cool, wet conditions when crop growth is slowed. Open furrows facilitate their feeding on seeds and germinating seeds, so ensuring furrow closure can help reduce damage. Slugs are molluscs, not insects, so most insecticides are ineffective for controlling slug populations. For severe slug infestations, granular baits are available, but their efficacy can be reduced by rain. Predators like ground beetles and wolf spiders are the best option for control, but they must be kept in mind when farming. Using cover crops to attract these beneficials and limiting insecticide use by using Integrated Pest Management can build their populations. Insecticide-treated seeds and broadcast applications of broad-spectrum insecticides both negatively influence invertebrate predator populations and their effects are about equal. For more information on slugs and controlling their populations, see our “ Slugs as Pests of Field Crops ” fact sheet.

Western corn root worm is the most problematic pest of corn in the United States and costs growers about a billion dollars annually in damage and pest control expenses (Figure 7). In Pennsylvania, they are only problematic in continuous corn fields, and are not problematic if farmers rotate their corn with soybeans, alfalfa, sorghum among other crops. Western corn root worms overwinter as eggs. The larvae begin feeding on corn roots in late May and are present through early August. Severe larval feeding can greatly reduce root volume, leaving plants vulnerable to lodging when conditions become wet or windy.

Root worms are tough to control, and populations in the U.S. have evolved resistance against all the management options that have been developed (e.g., soil insecticides, crop rotation, single-toxin Bt corn varieties, and two-toxin Bt corn varieties (Table 1), though not every root worm population is resistant to all the control tactics. In Pennsylvania, we have fewer problems with resistance than growers in the heart of the Corn belt, but we can still have issues. In Pennsylvania, for example, some fields that have been in corn continuously for just three years have developed populations of root worm beetles that are effectively resistant to corn hybrids expressing single toxins of Bt. As a result, we recommend rotating continuous corn fields to non-host plants (e.g., soybeans, alfalfa, or sorghum; longer rotations are better), and farmers should strive to avoid growing corn in any one field more than two years in a row. If growers need to grow corn continuously, the best management practice is to use Bt hybrids that have at least two toxins for controlling root worms. Alternatively, growers can consider using untraited corn with a soil insecticide at planting—this option is better than putting insecticides over the top of Bt seed targeting root worms because the cost of untraited seed can be significantly lower than Bt seed.

Corn and soybean fields look similar from space – at least they used to. But now, scientists have proven a new technique for distinguishing the two crops using satellite data and the processing power of [Read More …]

Dairy Markets are Resolved to Improve Their Health in 2020 The winter is off to a mild start, and the cows are loving it. Milk yields and components remain high, and milk is sloshing around [Read More …]

Corn and Soybean Yields are YUUUGE