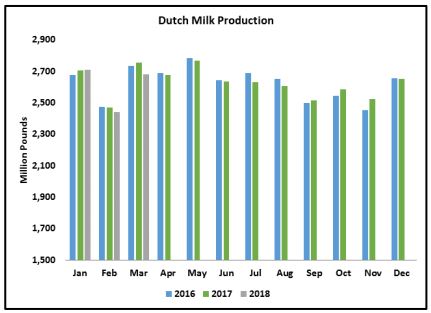 Spot dry whey improved to a new high of 32.5?, up 0.75? from last week. Contrary to the spot markets, dry whey futures lost ground this week and cheese futures moved upward. That helped Class III futures to advance yet again. Most contracts added a dime or so, and the June contract jumped 32? from last Friday’s settlement. Class III futures stand about a dollar higher than they did three months ago.

Like cheese, CME spot nonfat dry milk (NDM) established a new year-to-date high – at 86? per pound – and then faded. Spot NDM ended today at a still impressive 85?, up 0.75? from last Friday. Spot butter bounced around but ultimately closed 1.75? lower, at $2.335. Both NDM and nearby butter futures were in the red this week, but  Class IV futures were little changed. In the past three months, most contracts have gained roughly $1.20 per cwt. 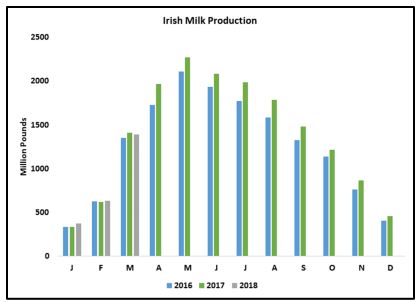 There was not a lot of news for the dairy markets to digest this week. Warmer weather is ushering in cheeseburger and ice cream season and cream multiples are rising accordingly. However, a rainy Midwest forecast might curtail consumption a bit. Warmer spring weather in the Midwest and Europe is boosting milk production and may be keeping prices in check. But the compressed spring flush has reduced aggregate milk production relative to its potential.

All but two of the 18 European nations who have reported March milk collections show either slower year-over year growth or greater contraction than they did in the winter months. Germany and France have yet to publish March milk production data, but the United Kingdom showed a 1.3% year-over-year decline in milk output, and production in the Netherlands dropped 2.6%. Fifth-ranked Poland reported 1.6% growth, its smallest advance since November 2016. Collections in Ireland dropped 1.1% from last March, the first year-over-year decline for the Emerald Isle since February 2017. 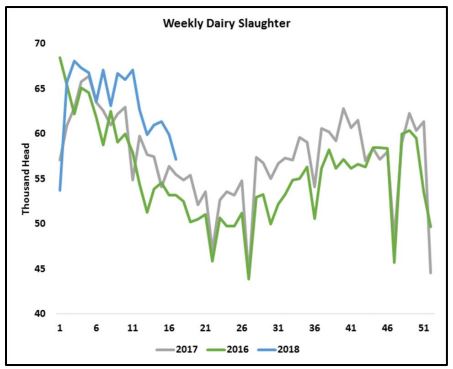 In the U.S., dairy producers continue to cull aggressively. For the week ending April 28, dairy cow slaughter was 57,226, up 3.1% from the same week a year ago. Year-to-date slaughter is running 5.5% ahead of the 2017 pace. Given rising feed and labor costs, still-low milk prices, and a depressed basis in many areas, slaughter volumes are likely to stay elevated. Falling cow values also reflect tough on farm finances. In the most recent Ag Prices report, USDA appraised national average milk cows for herd replacement at $1,360 per head, the lowest value since the three months ending January 2011. Prices at dairy auctions around the country continue to stair-step lower. Dairy product prices are notably higher, but some dairy producers remain in precarious financial straits.

Grain Markets
The feed markets moved sharply lower this week. July corn futures dropped back below the $4 mark, closing at $3.965 per bushel, down nearly a dime from last Friday. July wheat futures plunged almost 30?, which likely weighed on the corn market. Rains in the eastern part of the Southern Plains helped the parched winter wheat crop there, although western Kansas and Oklahoma once again saw very little rain. Moisture also improved the crop in the Black Sea wheat region. Wheat from that part of the world is much cheaper than U.S. supplies, which is throttling U.S. export prospects and prices. 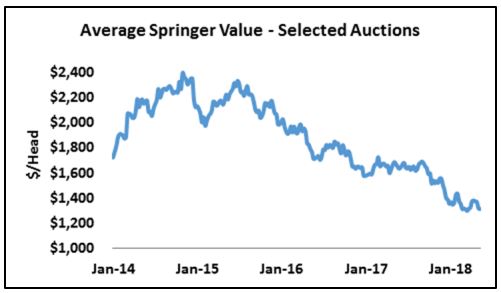 Planters were rolling throughout the Corn Belt this week, but they’ve since been parked in the shed. It’s wet and rains are expected to continue off and on for the next two weeks at least. The bulls express concern about slow planting progress. The bears are certain that the lack of a drought threat in the Corn Belt should sap some weather risk premium.

July soybeans settled at $10.0325 today, down 33.5?. The soybean market is likely weakening due to concerns about the souring trade relationship between the U.S. and China. The world’s largest soybean buyer added to the pressure this week. China’s Agricultural Ministry forecast a slight year-over-year decline in soybean imports in the 2018-19 crop year. If correct, this would be the first such decline in 15 years. China expects increased domestic soybean and DDG output and warns that “falling profits for pig farming will lead to reduced use of protein in feed.” 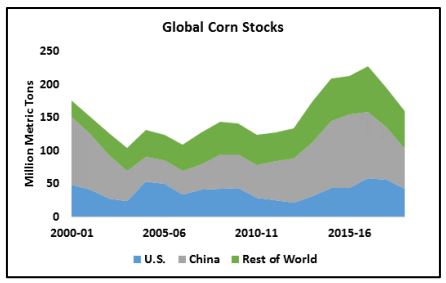 USDA’s monthly update to its World Agricultural Supply and Demand Estimates (WASDE) held no surprises. But the May issue offers the agency’s first outlook for the 2018-19 crop year, and provides an opportunity to reflect on robust global demand for feed stuffs. USDA adopted acreage figures from the March Planting Intentions survey and trend-line yields. For corn and soybeans, both figures were lower than last year, resulting in a projected 3.9% year-over-year decline in U.S. corn production and 2.6% drop in soybean output. After a tough year in South America, much depends on U.S. crop yields. If the weather suggests they could fall below the current projection, the crop markets will be quick to rally.

In the long run, feed costs are likely headed higher. Even if the U.S. enjoys a bumper harvest, global crop inventories are expected to decline. USDA projects that world corn stocks at the end of the 2018-19 crop year will total 159.15 million metric tons. That’s down 30% from the peak at the end of the 2016-17 season. Over the same two-year period, inventories of corn in China are projected to drop 40%, with a 27% decline in U.S. corn inventories, and an 18% decrease in the rest of the world. Meanwhile, demand for grain and oil seeds is marching relentlessly upward.

Wall’s Message: “Lead Your People, and the Cows Will Follow.” Dubbed the “Dairy Coach,” Tom Wall is passionate about helping people and farms reach their potential. Based in Green Bay, Wis., he is the President [Read More …]

USDA released solicitation and information about the $3 billion Food Box Distribution Program, which was announced one week ago by Secretary Perdue. This program is open to food producers, processors, and distributors that will supply [Read More …]