After dragging their feet for months, the Class III markets finally have a little spring in their step. Barrels are downright peppy. This week CME spot Cheddar barrels jumped 7.25? to a fresh six-month high at $1.565 per pound. Blocks added a penny and reached $1.57. The whey powder market seems to have arrested its decline. It climbed 1? this week to 33?. Nearby Class III futures were sharply higher, erasing much of the losses they have suffered since the turn of the year. March Class III added 9? and moved back over the $15.00 mark. The April contract finished at $15.29, more than 40? higher than last Friday. Deferred contracts were little changed.

Worldwide milk output is slowing. Years of inadequate prices and recent bouts of bad weather are taking a toll. In Europe, January collections totaled 28.4 billion pounds, 1.2% less than the prior year. That’s a deficit of 356 million pounds, greater than Indiana’s January milk production. After big gains in January, New Zealand’s milk output fell flat last month. February collections totaled 4.1 billion pounds. On a milk solids basis, production was 0.1% shy of the prior year, bringing season-to-date output up 4.9% from the 2017-18 season, a far cry from the 5% to 6% growth that prevailed from August to January. Going forward, dry pastures and the seasonal drop-off in milk production signal that the world won’t have to absorb much excess milk from New Zealand anytime soon. Meanwhile, the drought in Australia continues to devastate milk production Down Under.

Closer to home, growth in milk output has slowed to a crawl. U.S. milk production totaled 17 billion pounds in February, up just 0.2% from the prior year. That is the smallest year-over-year gain in output since January 2016. The increase is due entirely to a 1% improvement in production per cow. At 9.359 million cows, the dairy herd is 77,000 head smaller than it was a year ago. 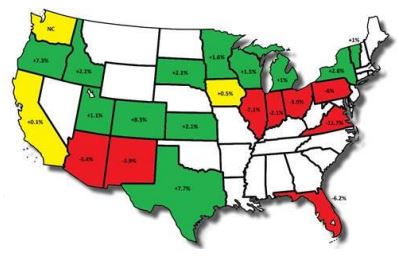 USDA’s assessment of recent changes in the milk cow herd was, once again, perplexing. The agency revised upward its estimate of the January herd by 4,000 head, putting it 6,000 head higher than it was in December. USDA reports that milk cow numbers held steady from January to February. Dairy cow slaughter reached a 32-year high in January and has only accelerated since. Excluding the cow-kill program of 1986 and the weeks immediately before and after Christmas and New Year’s, when the holidays augment slaughter volumes, weekly dairy cow slaughter had never topped 70,000 head. But it did so each week of February, and it hasn’t stopped. In the week ending March 9, slaughter was 72,654 head, the highest non-holiday tally since 1986 and the highest volume for any week since 1993.

The U.S. dairy herd is shrinking quickly, but strong milk yields may be masking the magnitude of the contraction at the moment. Once the spring flush has passed, the milk market will be better able to assess the size of the dairy cow deficit.

Even now, when fluid milk consumption is depressed by spring break and the flush continues to build, some balancing plants in the Eastern half of the nation are running below capacity, a marked shift from the past three years. Tighter milk supplies are also trimming barrel output. There is not as much discounted milk looking for a home. Cheesemakers are not trying to maximize throughput to the same extent they were at this time last year. They have more flexibility in the product mix and will shift some milk away from Cheddar barrels into cheeses with higher profit margins. That’s likely contributed to the recent turnaround in the fresh cheese market, and it was reflected in this afternoon’s Cold Storage report. Cheese inventories barely grew from January to February, and inventories of American-style cheeses – including Cheddar – fell by 18 million pounds in February. That’s the largest January-to-February decline in 25 years. Still, there’s no shortage of cheese; inventories of American cheese were 3% greater than the prior year, and stocks of all cheese varieties topped last February by 4%.

Butter stocks remain below year-ago levels. Manufacturers added 31 million pounds to the butter stockpile in February, a build that lags the historic average. There were 242.5 million pounds of butter in cold storage on February 28, some 8.7% less than at the same point in 2018. Given abundant cream and large volumes of imported butterfat, the modest increase signals continued strength in butter demand. Firm demand, slowing global milk output, and tightening stocks suggest that the worst of the dairy downturn is finally in the rear-view mirror. Near-term milk prices are far from exciting, but they are much better than where they were. Given the depth of the pain the industry has suffered over the past four years, the upcoming rally is likely to have considerable staying power. Dairy producers simply lack the appetite and the equity to significantly expand as milk prices recover. The grain markets continued to rally this week. May corn settled at $3.7825 per bushel, up 6? from last Friday. Wheat futures also added 6?. However, soybeans retreated. The May contract closed at $9.0375, down 23.5? for the week. President Trump and Chinese negotiators seemed to back away from recent reconciliation regarding trade policy, which weighed on the soybean market. On the other hand, China purchased some U.S. corn, a market from which they have been largely absent for years. Bulls in the corn market are salivating at the idea that China could become a major importer; however, China has a large domestic stockpile to use up as well.

It’s wet in the Corn Belt, sparking concerns about planting this year. Nebraska and western Iowa have been hammered with rain and snow. The spring thaw is producing historic floods which have damaged some grain in storage and will slow preparatory fieldwork. That suggests that some fields intended for corn may be seeded with soybeans instead. However, it’s called the Corn Belt for a reason. If the weather allows, corn acreage is likely to increase this year.

For more information, go to https://www.jacoby.com/

Ted Jacoby III is the President and CEO of T.C. Jacoby & Company, a major North American dairy product trading company. Prior to joining the firm in 1996, Jacoby worked in dairy plants specializing in fluid milk and cheese processing. He became manager of the company’s Trading Group in 2010 and moved into the role of President and CEO in December 2015. He holds a food science degree from Cornell University and an MBA from Washington University in St. Louis.