While the coronavirus pandemic negatively impacted many industry sectors in 2020, it fostered a positive trend in the dairy milk category. 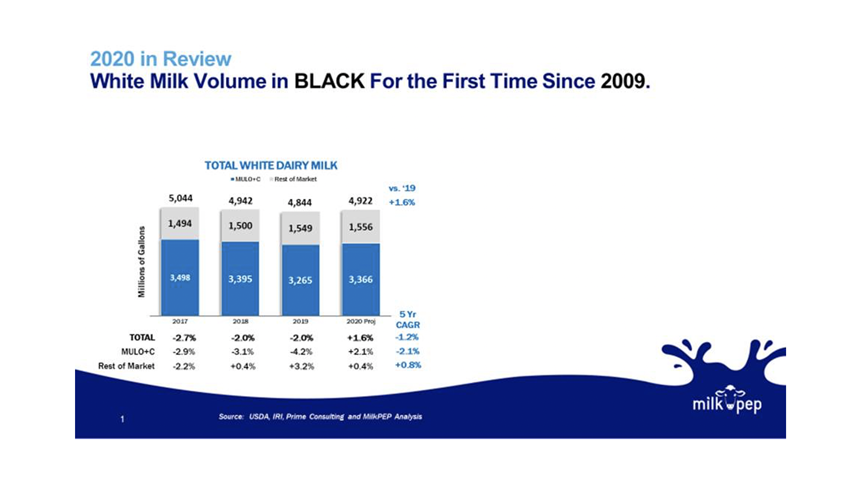 The Milk Processor Education Program (MilkPEP), funded by the nation’s milk companies and dedicated to educating consumers and increasing consumption of fluid milk, reports that white milk has reversed a decade-long decline. This market trend was driven by the increase of in-home consumption. American consumers were actively seeking out the myriad of nutritional benefits milk delivers, in part to assuage the health concerns brought on by the worldwide pandemic.

“The impact of COVID-19 influenced consumer trends in a number of important and interesting ways,” explained MilkPEP CEO, Yin Woon Rani. “For one thing, it’s made consumers far more likely to choose foods and beverages that promote their health and rank high in taste and value. In that regard, dairy milk happens to be in a supremely unique position, as it delivers on all three of these valuable needs.”

Based on retail sales data provided by IRI, fluid milk volume grew 2% in 2020, reversing a – 2.1%, five-year compound annual growth rate. Furthermore, dollar sales climbed 7.6%, as overall milk growth was fueled by not only increased demand, but also by consumers shifting to higher-priced, value-added varieties, such as organic and lactose-free milks. Trends were remarkably consistent across the country, as every region closed the year with healthy volume gains, while milk sales in foodservice and schools took a hit, as was the case with other food and beverages.

According to New York City-based market research firm Radius Illumination, the volume gains are driven by kids of all ages and their parents. The growth was sparked when consumers started sheltering in place in March 2020 and more meals happened at home, where milk is a tasty and versatile family favorite.

As people flocked to grocery stores to stock up on nutritious items, most shopping carts included at least one dairy milk item. The industry was committed to doing whatever was necessary to keep shelves fully stocked with milk to meet the growing demand. Promisingly, that trend did not abate even as restrictions were lifted later in the year.

In August, MilkPEP seized on the momentum by resurrecting one of the most iconic campaigns of the 90s and early 2000s, got milk?.

Reinventing got milk? for the social media era, MilkPEP teamed up with Olympic swimmer Katie Ledecky and pro skateboarding legend Tony Hawk, both of whom participated in TikTok’s got milk? challenge and pulled off some epic stunts – all while holding a glass of chocolate milk and white milk, respectively. Ledecky and Hawk then turned to consumers, calling on them to join the challenge, and they did en masse, posting inspired videos of themselves having fun at home with milk.

The memorable, nostalgia-driven campaign resonated with consumers of all ages and, particularly, the social-first generation, even though many of those viewers were far too young to have seen the original ads when they first ran in the early nineties. The campaign also partnered with Hershey’s so shoppers who bought a gallon of milk and a bottle of Hershey’s syrup saved $1.

As the holidays neared, got milk? published several Instagram posts purporting to be excerpts from Santa Claus’ journal – another clever stunt to keep milk at the forefront of young consumers’ minds.

“It’s no surprise that people started gravitating toward milk when their health became a top priority,” says Kelly Fisher, a Regulatory and Nutrition Communications Consultant. “Dairy milk is a comfort food, but it just so happens to be an extraordinarily nutritious one. As nutrient-rich as it is delicious, milk’s health benefits are supported by hundreds of scientific studies. Dairy milk provides vitamins A and D, protein, zinc, selenium and iodine, all of which support a healthy immune system, a particularly compelling selling point especially during the pandemic.”

Cooped up at home during the pandemic, consumers have also taken an even stronger predilection for comfort foods and beverages. Milk was a key ingredient in a number of these trends, including Dalgona coffee, whipped coffee made by mixing instant coffee, sugar and hot water, and whisking them into a thick, frothy cream that’s topped with milk. And then there were chocolate bombs, which playfully dissolve when hot milk is poured over them. The got milk? campaign, along with these viral comfort food and beverage-forward trends helped drive a 40% increase in positive mentions about milk in 2020.

“I think it is quite telling that we all reached for milk when times got tough,” Rani says, “and boy did we reach for a lot of it. As a child, you instinctually know that drinking milk is a simple, delicious way to be healthy and strong – it’s basically a nutrient powerhouse. Of note, it has been so inspiring to see so many teens embracing milk. Our campaign really struck a chord with them and reminded consumers of all ages that milk is fun and provides us with so much good stuff, both physically and emotionally.”

To kick off 2021, got milk? joined forces with General Mills Big G Cereals to celebrate the classic pairing of milk and cereal, which also experienced a major consumption uptick in 2020. Throughout January, consumers have been treated to limited edition boxes of General Mills Big G cereal with iconic characters – like Buzz, Lucky, Trix and more – donning the iconic got milk? mustaches, highlighting the winning combination of cereal and milk.

In fact, kids who eat cereal get 53% of their daily milk consumption from pouring milk into their bowl. The limited-edition boxes also include coupons on the back of the box.

Cargill will donate up to 80,000 servings of milk for use of HerdFirst Facebook frame and #putyourherdfirst Cargill Animal Nutrition is celebrating the launch of a new line of advanced calf and heifer nutrition, HerdFirst™, [Read More …]

Milk: One of the most needed, least donated items

Great American Milk Drive calls for donations to feed hungry families this holiday season Passing a glass of milk to loved ones during the holidays means passing the feeling of comfort, togetherness and wellbeing. But [Read More …]

got milk? A new generation embraces the iconic question

Americans got more milk this year than in recent memory, and today’s social-savvy generation is sharing it all online When things got tough this year, Americans went out and got milk – lots of it. [Read More …]