There’s no arguing that antimicrobial resistance is a concern and something we should be cognizant of. The ability to treat a wide range of diseases and illnesses is an extremely valuable tool that we need to keep effective. Evidence shows that the true cause of antimicrobial resistance is human overuse and misuse. Furthermore, farmers have already taken serious steps to improve antibiotic stewardship.

In 2017, the World Health Organization (WHO) ranked the 12 most dangerous superbugs. The Priority 1 superbugs, which are considered critical, are all resistant to carbapenem. The carbapenem class of antibiotics are not used in livestock – meaning the resistance has come from use in human medicine. Based on a 2017 stewardship report, the Centers for Disease Control and Prevention (CDC) estimates that at least 30% of all antibiotics prescribed in outpatient clinics and hospitals are unnecessary. 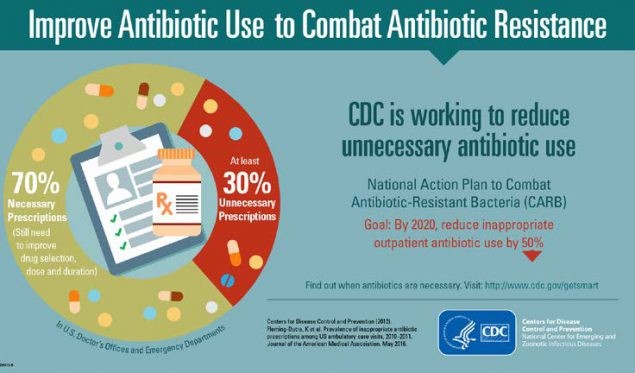 Differences in human and animal medicines

Another important point to make is that the most-used antimicrobials in livestock are severely different than those most-used to treat humans. The vast majority of antibiotics are either used in people or animals, but very rarely both. For instance, tetracycline is the most used class in animals at 41%, while it makes up just 4% of usage in humans – the vast majority of that use is in human acne cream. Penicillins are the most used in humans at 44%, but only comprise 6% of animal agriculture use. Ionophores which make up 30% of usage in animals are not used for human treatment. 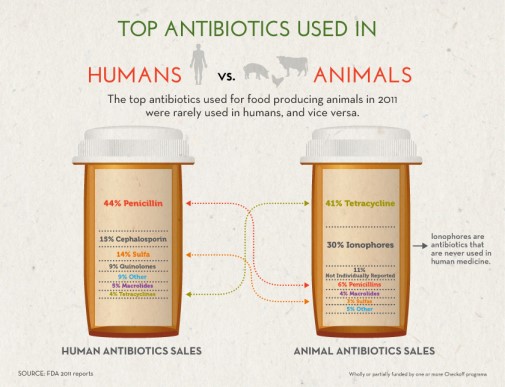 Studies show that the most urgent antibiotic resistance threats are unrelated to livestock. There is a 1 in a billion chance of antibiotic treatment failure from resistance to common animal antibiotics. This means we are thousands of times more likely to die from a dog bite or lightning striking than from resistance related to animal agriculture. In addition, a December report from the Food and Drug Administration (FDA) shows that antibiotic usage in animal agriculture is greatly declining. The report outlines that sales and distribution of medically important antibiotics for use in livestock have declined by 33% between 2016 and 2017.

There’s a continued response that antibiotic usage in animal agriculture is unnecessary, but that is inaccurate. Animals are raised in conditions that promote health and wellness – but at some point they will become sick and potentially need treatment. While some companies and package labels are committing to zero antibiotic treatment, this does not share the full story. In truth, animals that were treated with antibiotics are simply marketed under a different name or label.

Lastly, the concern of antibiotics in food and milk is non-existent. Meat producers that utilize antimicrobials for treatment follow strict withdrawal periods. These withdrawal times tell farmers when their animals can safely enter the food system as the antibiotics have safely passed through their system. Meat products are tested for antibiotic residues prior to entering the marketplace. Milk follows similar regulations and testing. Any animal treated with antibiotics will continue to have their milk tested until the results show it is free of the residues. Milk is dumped from those animals until it reaches that point. Milk tanks are also tested prior to being picked up for processing.

Solving instead of scapegoating

Unfairly blaming animal agriculture for antibiotic resistance will not help us solve this issue. Overuse and misuse of medically important antibiotics in human use is the number one reason for the increase in resistant bacteria in our environment. While it may be simpler to blame the agriculture industry, true improvements will not be made until we realize that human antibiotic use is the true concern. Animal agriculture is already making improvements in antibiotic stewardship. Now, it’s time for humans to do the same.

All posts are the opinion of the author and do not necessarily represent the view of the Animal Ag Alliance.

Dr. Frank Mitloehner points out the fallacies in the EAT-Lancet report

In an interview with Joel Hastings of DairyBusiness News, Dr. Frank Mitloehner, the “Green House Guru”, points out the fallacies in the EAT-Lancet report issued last month. A professor of air quality and Extension specialist [Read More …]

For the last half century, U.S. animal agriculture has focused primarily on improving productivity, efficiency and throughput, resulting in increasing supplies of commodities that have helped assure a safe, abundant U.S. food supply and growing [Read More …]