Current News
The USDA’s National Agricultural Statistics Service (NASS) reported for the third consecutive month that dairy farmers would receive a payout should they elect to sign up at the $9.50 coverage level under the new Dairy Margin Coverage program.
The March 2019 milk and feed-price margin under the Dairy Margin Coverage (DMC) program is $8.85 per cwt., which would generate a payment that month of $0.65 per cwt. for producers who purchase 2019 coverage at the DMC maximum level of $9.50 per cwt. for up to 5 million pounds of production history. The March DMC payment would be $0.64 per cwt. lower than February’s, due to a $0.70 per cwt. rise in the milk price offset slightly by a smaller increase in the price of alfalfa hay.
The projected March payout adds to January and February margins that together already ensure that producers who enroll at the $9.50 coverage level will receive more in DMC payments during 2019 than they will pay in premiums. USDA is currently predicting that $9.50 DMC coverage will generate additional payments for April through July. Signup is expected to begin June 17.
The 2018 Farm Bill also removes the previous restriction that prohibited producers from enrolling milk in both the Margin Protection Program that DMC replaced and the Livestock Gross Margin for Dairy (LGM-Dairy) program during the same month. It further allows farmers previously prevented from enrolling in MPP during 2018 due to this restriction to enroll retroactively in MPP and collect payments for 2018 for the months during which they were prevented from doing so. Farmers who purchased buy-up coverage under MPP during 2014-2017 are also eligible under the Farm Bill to receive a partial refund of their net payments during those years.
USDA’s DMC margin forecasts and DMC Decision Tool also now can be accessed online. 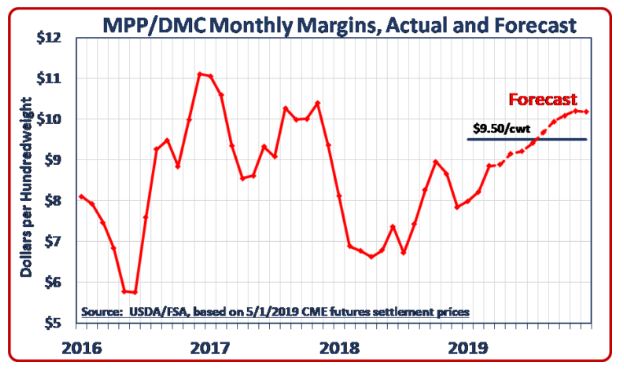