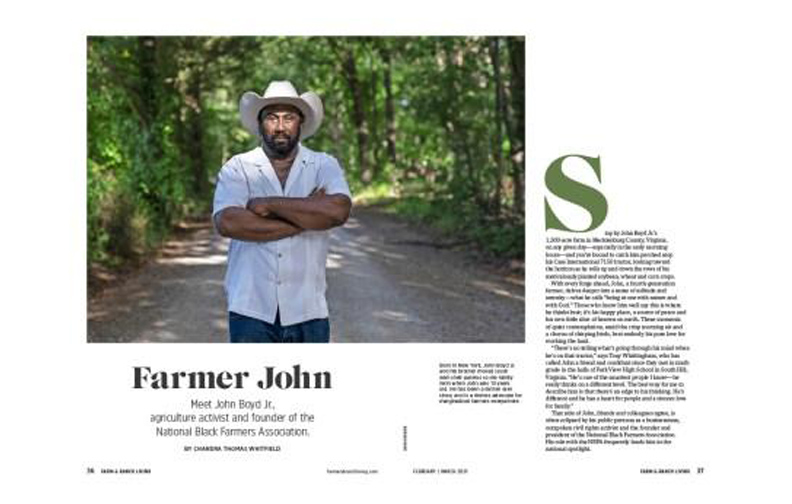 Stop by John Boyd Jr.’s 1,300-acre farm in Mecklenburg County, Virginia, on any given day—especially in the early morning hours—and you’re bound to catch him perched atop his Case International 7150 tractor, looking toward the horizon as he rolls up and down the rows of his meticulously planted soybean, wheat and corn crops.

With every forge ahead, John, a fourth-generation farmer, delves deeper into a sense of solitude and serenity—what he calls “being at one with nature and with God.” Those who know him well say this is where he thinks best; it’s his happy place, a source of peace and his own little slice of heaven on earth. These moments of quiet contemplation, amid the crisp morning air and a chorus of chirping birds, best embody his pure love for working the land.

“There’s no telling what’s going through his mind when he’s on that tractor,” says Tony Whittingham, who has called John a friend and confidant since they met in ninth grade in the halls of Park View High School in South Hill, Virginia. “He’s one of the smartest people I know—he really thinks on a different level. The best way for me to describe him is that there’s an edge to his thinking. He’s different and he has a heart for people and a sincere love for family.”

That side of John, friends and colleagues agree, is often eclipsed by his public persona as a businessman, outspoken civil rights activist and the founder and president of the National Black Farmers Association. His role with the NBFA frequently lands him in the national spotlight.

John, 55, was born in Brooklyn, New York, but he came to embrace the slower pace of rural life—albeit reluctantly at first—after his parents moved the family to Virginia. John was 13, a middle school student. “If you don’t want to work hard, don’t be a farmer,” he says. “But if you want gratification from your work—you know, from seeing that crop grow to seeing it harvested and going to the combines—it’s the most rewarding occupation that you could do as far as clean, healthy work.”

Known for his husky voice, hearty laugh and an affinity for cowboy hats (the bigger the better), John founded the NBFA in 1995. Today the organization—which advocates for equality in farming—boasts a robust membership across 42 states. John says he has committed his life to fighting for Black farmers everywhere.

Like his father, grandfather and great- grandfather before him, John is a farmer through and through. In fact, his great- grandfather, who came to America in shackles as an enslaved man, eventually managed to purchase his own land—no small accomplishment in the post-Civil War South. Family legend has it that each night he slept with the deed to his farm underneath his pillow.

John spent nearly 15 years as a chicken farmer and also managed tobacco crops before settling on the beans, grains and cattle that he and his wife, Kara, who shares his deep love for the land, raise on their farm in Baskerville, Virginia.

“Ever since we were kids, that’s all he’s ever done. In ninth grade and all through high school—you know, Future Farmers of America and work on the farm,” says Tony. “Multiple generations of his family have been involved with farming. At the end of the day,that’s all he knows.”

It’s back-breaking work. But, John insists, it’s also the most fulfilling—so much so that he’s tried for years to convince his adult sons, both in their 20s, to commit to taking it over one day. (“To pass along that family legacy would be a lifelong dream,” he has said.) Thus far it has been a losing battle. They, like many in the younger generation, aren’t sold on the profession. John says that this heartbreaking reality fuels his longstanding crusade to attract young people to the field; it’s an effort he says he’ll maintain until he takes his last breath.

Los Angeles-based film and television producer Jeff Brick worked closely with John during the filming of The American Farm, a 2019 History Channel docuseries that featured the Boyd family. Jeff says he has no doubt that John will persevere.

“John Boyd is a force of nature. There is never a problem that is too difficult for him to take on and ultimately overcome,” says Jeff. “He has dealt with constant adversity in his life and career since the beginning, but wakes up every morning unfazed and ready to attack a new day. He’s an indefatigable advocate for Black farmers in the United States, a hard worker, a devoted family man, shrewd and smart.” If John’s unconventional credentials are any indication, Jeff is right.

MAN ON A MISSION

John Boyd Jr. is not your average farmer. Not many people, let alone farmers, can say they’ve met—and met with—numerous United States presidents, vice presidents and representatives. He has also testified before the House Committee on Agriculture and was once vetted as a contender for U.S. Secretary of Agriculture. It’s all part of what he considers his calling in life: a pointed and purposeful mission to fight for equality and justice on behalf of Black farmers who, as a group, have long been marginalized and pushed out of the industry due to racial discrimination. John says this is the central reason he founded the NBFA and why, more than 25 years later, he remains very much hands-on and the primary face of the organization.

“I have to help educate, especially Black people, in this country. Land ownership and the ability to produce your food are two of the most powerful tools that you can possess—second only to devoting your life to Jesus Christ,” says John. “The ability to own land and grow your own food is a very, very powerful tool.”

John has been particularly vocal about federal loan discrimination—the fact that, for generations, Black farmers have been shut out of the USDA’s intricate system of subsidies and federal farming programs that can be the lifeblood of successful farming operations. And he says he has experienced it firsthand, starting in the 1980s when he was repeatedly denied USDA loans for which he met the criteria. That experience opened his eyes to a backlog of unresolved discrimination cases filed against the agency.

The issue is so close to his heart that he once hitched up two mules, aptly named 40 Acres and Justice, and drove his wagon 280 miles from Virginia to Washington, D.C., to draw attention to it. With the NBFA’s support, a longstanding class-action racial discrimination case filed against the USDA on behalf of Black farmers resulted in a $1.15 billion settlement that Roll Call deemed “the biggest Congressional victory in history for Black farmers.” John also helped drum up support for a follow-up: the passage of a federal law in 2010 that ensured all settlements would be awarded to eligible recipients.

John says he’s deeply concerned about the shrinking number of Black farmers in the United States. “Our numbers have dwindled from the turn of the century,” says John, noting that there were nearly a million nonwhite farm operators in this country at that time. Indeed, the USDA’s 1910 Census of Agriculture shows that more than 240,000 of these farmers were owner-operators.

“When animals and species become endangered,” John says, “Congress acts to preserve them and make sure that they survive. So we can save the snail darter, the bald eagle and the rockfish, but we haven’t put any real laws in place to preserve the oldest occupation in history for Black people, which is farming.”

The number of farmers has decreased across the board, but the drop has been especially precipitous among Black Americans. According to the 2017 ag census, there are fewer than 50,000 Black farmers in the United States—just 1.4% of the country’s 3.4 million farmers—and those who remain in the industry tend to make substantially less money than their white counterparts. (The net cash income of the average Black-owned farm in the United States is $3,509, compared to $43,608 for white-owned farms.)

This income disparity is due in part to land ownership imbalances. The 2017 USDA report found that Black people own 29,788 farms in the U.S., with a total of just over 2.5 million acres in farmland. By contrast, white people own nearly 2 million farms, totaling close to 501 million acres. In other words, Black people own less than 0.5% of the amount of farmland owned by white people. These numbers gain even greater significance when viewed alongside the racial demographics of the U.S., where whites make up 60.1% of the total population and Blacks make up 13.4%.

Producer Jeff says John’s dedication to his work—both on and off the farm—shines through in The American Farm. He recalls an especially moving scene from filming that he believes best captures John’s significance to the agricultural industry.

“There was a moment, early in the first days of planting season, when I stood with John on a hillside of his farm, looking down into a hand-dug well that was at least 150 years old. He’d uncovered it while tilling the soil with his John Deere and a disker, first bought in the 1980s and repaired countless times,” remembers Jeff. “As he looked down into the darkness and hand-stacked stones, he said, ‘Lot of history in that well.’ It struck me then that on the day this well was dug, John, as a Black man, wouldn’t have been standing over it as the landowner that he is today.”

In recent months during the ongoing pandemic, John says he’s been traveling less and staying closer to home. This has allowed for some time to regroup and more time with family—particularly his parents, John Sr. and Betty Jean, for whom John and Kara share full-time caregiving duties. Seeing his parents, he says, inspires him to keep hope alive that pushing for change is making a difference.

You won’t find Farm & Ranch Living magazine on newsstands, so to get a copy, visit shoptasteofhome.com to purchase. Quantities are limited.