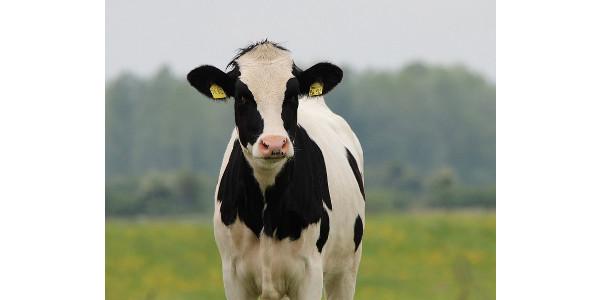 A study of the UW dairy herd looked at 141 lactating Holstein cows. (Courtesy of UW-Extension)

MADISON — Zoey Rugel: New research on the estrous cycle in cows. Today, we’re visiting with Paul Fricke, Extension specialist in dairy cattle reproduction, Department of Dairy Science, University of Wisconsin-Madison/Extension, in the College of Agricultural and Life Sciences, and I’m Zoey Rugel. So, Paul, tell us about some current research you have going on.

Paul Fricke: One of the most recent projects that we’ve worked on had to do with looking at when cows return to estrus after you inseminate them. A lot of people in the industry have bought these heat detection systems, and, so, what they’ll often notice is that non-pregnant cows don’t all come into estrus at 18 to 24 days—it’s more like 18 to 32 days. So, we have a lot of cows with these extended inner estrus periods and that kind of peaked our interest as to what was going on during this time period.

Zoey Rugel: Tell us about the study. How was it conducted?

Paul Fricke: Yeah. So, what we did is we worked in our UW herd here, which is right on campus, sitting up at Arlington. We took 141 lactating Holstein cows, we set them up for a timed insemination. Then what my graduate students were doing is that 3 times a week they would ultrasound the ovaries to see what the CL looked like. They would take blood samples to look at progesterone. So, we could really define what was happening with the corpus luteum during this time and what was going to happen as far as when the CL regressed.

Zoey Rugel: What did you end up finding?

Paul Fricke: 57 of those 141 cows were pregnant, and pregnant cows are really kind of boring when you look at them, because progesterone comes up, the embryo signals the maternal system that the cow is pregnant, and they just maintain that CL. What was really interesting was the non-pregnant cows. There were 80 cows that were diagnosed open on day 32 and only about half of those cows, 55 % of them, read the textbook. They would’ve regressed their CL and come back into heat about that 18 to 24 day time period, but there were 23.7% of those animals that had an extended luteal phase, and what was most interesting was that there was about 21.3% of the cows that never regressed their CL during this time period, but did not have a CL when we did the pregnancy check on day 32. So, those cows would never have shown an estrus during that time period.

Paul Fricke: So, the primary reason that this happened—the other aspect of this experiment—is we pulled blood samples from those cows on day 25 and day 32, and we can measure a pregnancy-associated glycoprotein. This is a protein that is secreted by the pregnancy, and over half of the cows that failed to regress their CL had the presence of this pregnancy-associated glycoprotein, indicating that they were pregnant long enough to keep them out of estrus, but then they subsequently lost their pregnancy. So, it’s just another way to look at this really early pregnancy loss that would’ve gone unnoticed if you just do a pregnancy check, but, in fact, a lot of these cows are getting pregnant and having these extended luteal phases and it really changes the dynamics of when these cows are coming into heat.

The Future of Your Farm Relies on Healthy Calves