CDCB launched a new genetic evaluation – Early First Calving – with the April evaluations. You might ask Why, when there are already genetic evaluations for 45 traits. The answer is quite simple: maximum genetic gains can only be achieved when all traits of economic value are included in a composite economic index. (Read more from the December 2018 CDCB Connection.)

Raising replacement dairy animals requires upfront financial demands for feed, health care, housing and labor, and normally without any income for a considerable time. Heifer rearing accounts for 15 to 20% of the total cost of producing milk. This has stimulated considerable interest in uncovering the optimum age at first calving. Surely this optimum differs between herds as it is affected by the differences in costs between herds, so it’s a challenge to recommend the ideal age for an individual herd. Nevertheless, management practices have improved, with one result being a remarkable reduction in age at first calving overall. In 1985 Holsteins averaged 28.1 months, by 2000 averaged 26.0 months and today’s average is 24.5 months.

This improved age at first calving has yielded enormous reduction in rearing costs. With rearing cost estimated at about $2.50 per day, the average expense per heifer has reduced by $275 ($2.50 x 110 days). Applying this to the typical DHI herd of 277 milking cows, this comes to a cost reduction of $76,000. The remainder of the equation is how the differences in age at first calving affects individual cow’s income once in the milking herd.

We’re fortunate that accurate records for age at calving have been recorded for all cows in DHI for decades. It’s terrific when one finds a trait with economic value that is already being collected (for producers’ benefit) so it doesn’t require a new initiative to capture the data. We’re taking advantage of the “low-hanging fruit.” 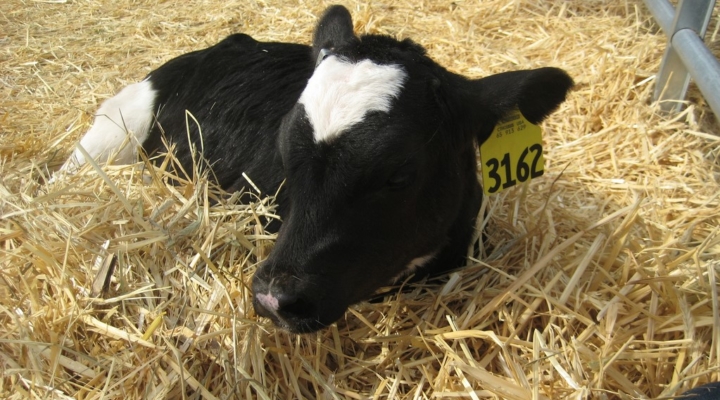 Early First Calving (EFC) is defined in days, and it is simply age at first calving with the sign reversed (+ vs. -). Selection toward positive values has been well-accepted for evaluation traits, and the trait was reversed so that selection would be toward what is normally considered the more desirable direction. If a bull transmits the genetics expected to reduce first calving by 2 days, his PTA for Early First Calving would be +2.0 days.

Breeds often differ considerably in age at first calving. Most reports show Jersey enter the milking herd earlier than other breeds, while Ayrshires usually enter at the oldest age. It appears these differences are genetic, based on comparing those heifers born together in the same herd. The national cooperator database showed Jersey contemporaries calving 4 days earlier than Holsteins, whereas the other breeds calved later than Holsteins; Milking Shorthorn by 15 days, Guernseys by 18 days, Brown Swiss by 28 days and Ayrshires by 41 days. Genetic trend toward earlier calving already have shown about a 10-day gain toward younger calving in Holsteins and Jerseys, and as much as a 1 to 2-day gain in just the last 5 years.

Let’s review some details about the new Early First Calving evaluation. The following effects were accounted for in the model: herd-year-season of birth, regressions on inbreeding and heterosis, and animal genetic effect. The heritability of Early First Calving was 2.3%. The standard deviation of PTA (within breed) was 3 days, but a few recent bulls had deviations as large as 10 days. The new trait is grouped together with the fertility traits of heifer conception rate, cow conception rate and daughter pregnancy rate to (conveniently) facilitate multi-trait methods in the future. Reliabilities for young genotyped Holsteins averaged 66% and Jerseys averaged 51%. This is one of the amazing benefits of genotyping … one receives high prediction accuracy even though the heritability estimate for the trait is low.

The genomics 2.0 bovine map is here and while you will see some immediate changes, ultimately genomics 2.0 delivers a number of important improvements for dairy (and beef) genetics now and into the future.  Beginning [Read More …]

Same Trait, Different Result. How Can This Be?

What if you had your blood pressure checked twice in the same hour – and received different results? It’s certainly plausible, as conditions change. Different machines function differently and use slightly different formulas to calculate the systolic [Read More …]

A new milestone was met on December 13, 2018, when the three millionth genotype was uploaded to the national cooperator database managed by CDCB. Approximately 700,000 new genotypes were added to the national database in 2018. Most of the growth in genomic services involved [Read More …]