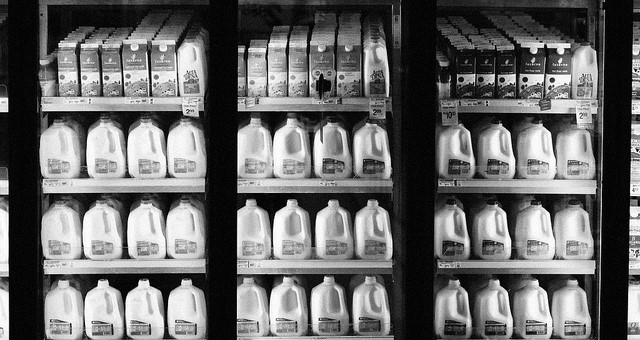 Mulhern noted that USDA’s proposed rule adheres to Congress’ statutory determination that meat and milk derived from livestock consuming bioengineered feedstuffs are not subject to labeling because there is no difference in those products compared to those from animals that consumed non-biotech feed. (teakwood, Flickr/Creative Commons)

The U.S. Department of Agriculture’s (USDA) proposed regulatory standard for the labeling of bioengineered food reflects much of the input provided by the National Milk Producers Federation (NMPF) to ensure that consumers receive accurate information about the sources of their food.

The USDA Agriculture Marketing Service’s (AMS) proposed rule outlines mandatory uniform standards for how food marketing companies must provide consumers information about the use of biotechnology in the food supply. The proposed regulation follows the strict, science-based approach that was backed by NMPF to determine how foods made using bioengineering should be regulated. Although the rule leaves several key issues unresolved, the agency is initiating a new public comment period on the proposal.

In comments that NMPF filed with USDA last year, NMPF said the new standard should focus on providing consumers with accurate information while discouraging misleading marketing tactics or meaningless absence claims. NMPF has been an active participant in the Coalition for Safe Affordable Food, which supported the bioengineered food disclosure legislation passed by Congress in 2016.

“USDA’s proposal strives to stay true to the goal of the law adopted by Congress, which is that shoppers should have meaningful and truthful information about how their food is produced, without requiring labeling disclosures that could be misleading or inappropriate,” said NMPF President and CEO Jim Mulhern. “However, the draft regulation hasn’t fully settled the question of what food ingredients need to be labeled, and we will weigh in again with USDA to seek final clarification.”

Mulhern noted that USDA’s proposed rule adheres to Congress’ statutory determination that meat and milk derived from livestock consuming bioengineered feedstuffs are not subject to labeling because there is no difference in those products compared to those from animals that consumed non-biotech feed.

“There is no reason to label a food that has not been modified, and that is the case for all milk and meat,” said Mulhern. “Of the more than 60 other nations around the world with biotech disclosure requirements, none have labeling requirements on milk or meats from animals that may have consumed bioengineered grains. It is important from both a science and consistent marketing standpoint that the United States follows this international precedent.”

Among the main issues still under consideration in USDA’s final stages of regulatory review are:

Although the USDA regulation does not address whether or how food companies can use absence claims – which tout information about what supposedly is not in a product – NMPF said that the fact-based standard advanced by USDA should help reduce the confusing labeling claims too often seen in the marketplace. NMPF previously told USDA that too many food companies utilize “fear-mongering” to vilify food biotechnology, as they seek to profit from the consumer confusion surrounding its use.


“A food label should not be designed to scare consumers into purchasing certain products, especially when such labels suggest a distinction when there is no real difference,” said Mulhern. “It’s simply wrong to manipulate consumers through unfounded fears, and it is not fair to the other food companies that don’t engage in such dishonest marketing. We support honest labeling practices in the marketplace, and hope USDA’s final regulation, when it takes effect later this year, will accomplish this goal.”

NMPF’s Galen Discusses the Need for Dairy Advocacy in Podcast