The margin for November under the Dairy Margin Coverage (DMC) program was $12.21 per cwt., $1.33 per cwt. higher than the October DMC margin. This was the highest margin since December 2014, even allowing for this year’s change in the formula to increase the alfalfa hay cost factor, and the largest month-to-month increase in the margin since September 2016. The September to October increase was a combination of a $1.10 per cwt. increase in the all-milk price and a $0.23 per cwt. of milk lower DMC feed cost calculation. The lower feed cost was contributed mostly by a lower price for corn, assisted by a lower price for soybean meal. The alfalfa hay factor in the formula was essentially unchanged from a month earlier, as a lower average price for all alfalfa was almost offset by a higher price for dairy-quality hay.

As of December 26, USDA’s DMC Decision Tool, which can be accessed online, projected the November margin would be its maximum value through at least all of next year, yet remain above $9.50 per cwt. during that time. The falloff from the November peak is expected to be due mostly to an expected drop in the milk price during the first half of 2020, followed by a modest recovery in the second half.

As of December 9, USDA reported that 23,229 dairy operations that signed up for the DMC program for 2019 were estimated to receive a total of $310.1 million in payments. The signup represented 82.3 percent of all operations with milk production histories under the program. As of January 6, the Department reported that 12,866 operations, or 47.2 percent of operations with production histories had enrolled in the 2020 program. Enrolling in the DMC program at the generous coverage and affordable premiums available will always be a highly-recommended risk-management option for dairy farmers.

The DMC information page on NMPF’s website offers a variety of educational resources to help farmers make better use of the program. NMPF also posted a video explaining how farmers can benefit from the DMC. 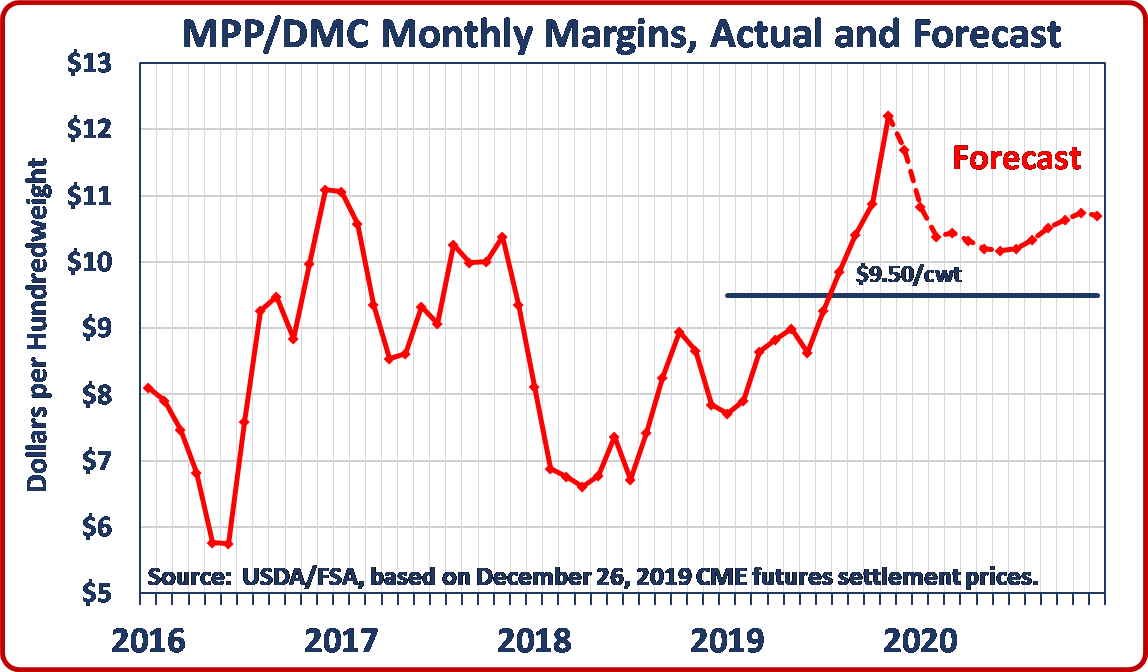 “Congress made important improvements to the dairy safety net earlier this year, but as we have said repeatedly, there is more that must be done in the upcoming Farm Bill. That need is particularly urgent [Read More …]

Sharing how his own farm is evolving to carbon neutrality and how the dairy sector is aggressively moving to become carbon-neutral by 2050, Indiana dairy farmer Mike McCloskey highlighted ways federal incentives can further help [Read More …]

Thanks Congress for legislation, provides highlights of package for dairy producers The National Milk Producers Federation (NMPF) thanked Congress for the positive steps it is taking through COVID relief legislation to assist dairy farmers who [Read More …]