For October, our example herd was UP.

Why do we measure % fat in milk? Historically, fat percentage was measured to guard against unscrupulous producers watering down milk which was sold solely on volume. The ability to separate fat as an individual milk component with economic value led processors to prefer milk with a high fat content and less fluid, causing producers to focus on this metric. However, all Federal Market payment systems are based on pounds of fat sold, not percent fat. To this end, some managers now measure pounds of components (fat plus protein) produced per cow per day. This is a move in the right direction; however, it assumes that fat and protein are equal biologically as well as economically. This month, for example, the price of fat is 50% higher than the price of protein. 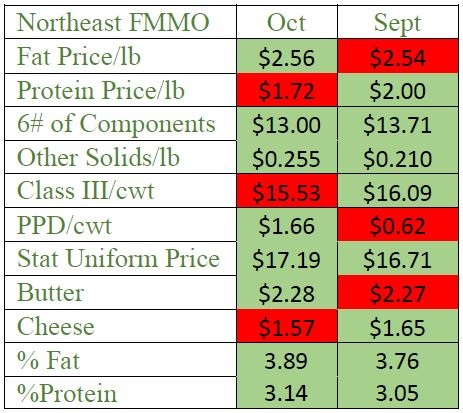 Stepping back and examining the cellular formation of fat, protein and lactose, we have concluded that there is very little direct control between lactose (determinant for fluid milk) and milk fat production. Lactose production is controlled by the ability of glucose to be converted to lactose. Milk fat is determined by the supply of acetate, butyrate, palm fat (C16) and C18 fatty acids. Acetate and butyrate are synthesized into other fatty acids. Whether synthesized or preformed (C16 & C18), fatty acids are transported to the other side of the cell and packaged into triglycerides (milk fat). The point is that the cell produces grams of lactose and grams of milk fatty acid independently. This suggests that fat percentage is a processor issue; grams of fat does not control milk volume. Our measurement of biological performance is grams of fat produced/cow/day. The monthly example herd produces 1505 g of fat/cow/day. In a recent presentation, we compared two examples of a herd that went from 3.6% to 3.4% fat. In the first example, milk remained the same and grams of fat decreased 83 grams. In the second example, milk increased 3 pounds. In this case, grams of milk fat were the same even though fat percentage decreased. However, lactose increased 112 grams.