U.S. outlook positive while trade woes slow global economic growth
Per capita world GDP growth of 1.9 percent in 2018 is the strongest since the post-financial crisis rebound in 2010-11. World GDP growth is expected to slow slightly to 1.6 percent in 2019, due in part to global trade tensions, but there is some optimism regarding future dialogue between China and the United States. There is more uncertainty than normal regarding U.S. economic conditions due to a lag in the release of economic indicators after the Government shutdown, such as U.S. Gross Domestic Product for the fourth quarter and U.S. International Trade in Goods and Services for December 2018. However, U.S. per capita GDP was estimated to have grown at above trend at 2.2 percent in 2018 and is forecast to remain the same in 2019, with continued optimism regarding the current economic landscape, especially given the strong labor market and low inflation.

Per capita growth in the Eurozone is hampered by a slowdown in global trade. The region expects export annual percentage growth to decrease to 2.8 percent for 2018, but exports will rebound to 3.3 percent in 2019. Real per capita GDP growth is expected to fall to 1.6 percent in 2019 from 1.9 percent in 2018. The Eurozone is also threatened by spillover effects of heavy Italian debt and the threat of a no-deal Brexit. 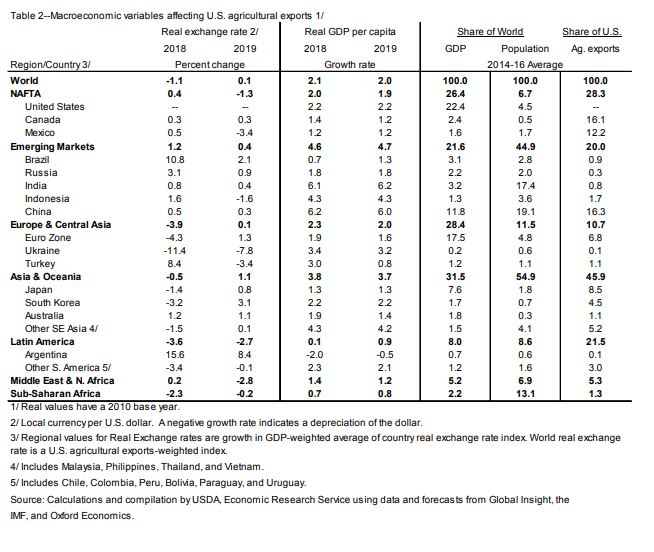 President Trump recently announced that the U.S. would impose tariffs on steel and aluminum imports.  Extra tariffs of twenty-five percent are being placed on steel and ten percent on aluminum. These tariffs went into effect today. Certain [Read More …]

A new analysis by the Nebraska Farm Bureau estimates the ongoing retaliatory tariffs imposed by countries on U.S. agricultural exports will cost Nebraska producers $943 million in lost revenues in 2019. The projected losses would [Read More …]

Every two years the world gathers to watch athletes perform amazing feats. In the spirit of the 2018 Olympic Winter Games and recently released trade data by USDA, we present the medal count of Mexico [Read More …]