Dairy producers are doing their best to top up the bulk tank while the futures promise decent Class III values. Cheesemakers are going strong, and they report that cheese is moving apace. 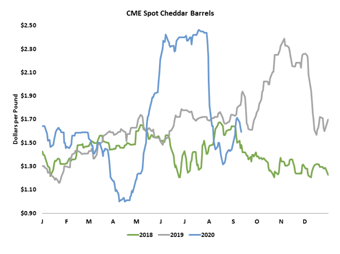 Cheddar blocks strengthened this week while barrels sputtered. CME spot blocks climbed to $2.165 per pound, up 4ȼ from last Friday. Barrels rallied to a one-month high on Tuesday, but quickly fell back. They closed today at $1.595, down 10.5ȼ for the week. The early-week strength pushed this week’s average price upward for both blocks and barrels, giving a 32ȼ boost to October Class III futures, which settled today at an impressive $19.21 per cwt. Most other Class III contracts finished a little higher as well. However, the September contract fell 58ȼ from last week’s euphoric highs.

Cheesemakers are going strong, and they report that cheese is moving apace. Italian-style cheese demand is robust, thanks to booming sales for takeout and frozen pizza. There is some chatter among processors that exports are on the rise now that barrel prices are more competitive.

The butter market continues to struggle as many Americans dine out less frequently or not at all. Restaurant traffic has improved a bit, but it remains well below pre-pandemic levels. Retail orders are creeping higher as the fall baking season ramps up. U.S. butter is competitively priced, but manufacturers report that demand from foreign customers is holding steady. In Chicago, spot butter slipped 1.25ȼ to $1.48. 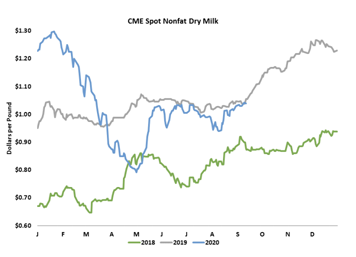 The powders climbed this week. CME spot dry whey climbed 2.25ȼ to 35.5ȼ, the highest spot whey value since May. Nonfat dry milk (NDM) added a penny and reached $1.04, its loftiest perch since March. The futures shrugged off the improvement in the spot market and retreated, dragging Class IV values along for the ride.

USDA’s Dairy Market News reports that domestic sales of NDM are “lively” and manufacturers have cleaned up their inventories. U.S. milk powder is a bargain on the global market, which is likely to keep product moving abroad and lend further support to U.S. NDM values. 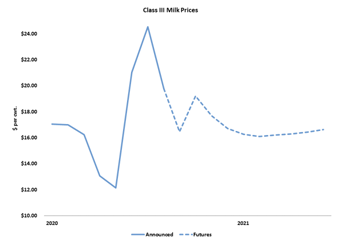 The government is doing all it can to provide food aid for those in need and many others. Last week USDA announced it would extend this summer’s free school meal program through December. While the plethora of government programs has clearly had a positive impact on dairy demand, USDA remains disappointed that many families who are forced to educate their children at home often can’t find the time to pick up free meals at school dispersal sites. The Brookings Institution estimates that only about 15% of low-income households who typically qualify for free or low-cost school meals have been able to access them, which is likely a drag on cheese and milk consumption. Concerns about the chronic pandemic, the uneven economic recovery, and their impact on demand are clearly weighing on dairy values, as reflected in painfully low Class IV prices and the steep decline in Class III values after October. 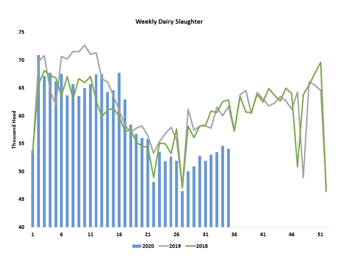 Dairy producers are doing their best to top up the bulk tank while the futures promise decent Class III values. Dairy slaughter volumes have mostly ranged between 50,000 and 54,000 head, the lowest dairy cow kill for this time of year since 2011. In the weeks since Independence Day, dairy slaughter has averaged more than 10% lower than during the same period in 2019, pushing year-to-date slaughter down 4.7% from the 2019 pace. That’s likely adding up to more cows and more milk. However, conditions in the West are not helping milk yields. As California burns, the air in the Golden State is hardly fit to breath for man or beast, which is surely a detriment to herd health. The smoky haze is trapping heat and humidity in the Central Valley, although the forecast looks less sweltering than the extremely sweaty conditions of recent

weeks. Milk production remains strong in the mountain states, but punitive supply management programs will continue to keep expansion in check. There aren’t a lot of places where dairy producers are welcome to build new facilities, but low slaughter volumes suggest they are adding cows here and there. Milk output is likely to rise slowly but surely, while demand prospects remain fickle.

With scant rains in August, drought spread across the Southwest and into Iowa and Illinois, the nation’s top corn and soybean states. USDA estimates that approximately 29% of the corn crop and 21% of soybeans are in areas experiencing drought. Parched soils took the top off the national average row crop yields, and the crops are likely to be much smaller than was expected a month ago. In today’s Crop Production report, USDA lowered its estimate of the national average corn yield to 178.5 bushels per acre, down from its August projection of 181.8. USDA also assessed the impact of the derecho, lowering its estimate of harvested corn area in Iowa by 550,000 acres, a 4% decline. USDA trimmed its estimate of the national average soybean yield from 53.3 bushels last month to 51.9 bushels. 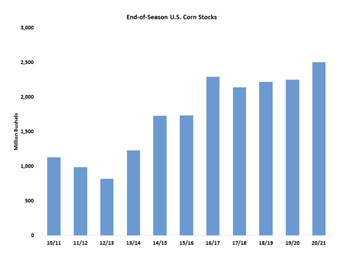 Although U.S. row crops will fall short of their summer potential, they will still be bumper crops by any other metric. If USDA’s projections are correct, this year’s corn crop will have the highest national average yield on record, and soybeans will match the record-high yield set in the 2016- 17 crop year. The robust harvest is likely to push end-of-season corn inventories to 2.5 billion bushels, the highest total since 1988. A rebound in exports is likely to trim soybean stocks relative to the previous season, but, at 460 million bushels, they will still be historically large. Nonetheless, crop prices are rising as export prospects improve. China’s farmers have faced several setbacks this year, and rising industrial and feed demand has pushed Chinese corn prices to five-year highs, opening the door for a significant increase in grain imports in the year to come. The U.S. is also likely to supply a greater share of China’s soybean imports due to lower inventories in South America. December corn futures settled today at $3.685 per bushel, up 10.5ȼ from last Friday. November beans closed at a two-year high of $9.96, up 28ȼ. December soybean meal surged $7.40 to $324.60 per ton.

Original Report can be read at: https://www.jacoby.com/market-report/pandemic-and-economic-recovery-concerns-weigh-on-dairy-values

The February jobs report, released March 6, showed another whopping 273,000 new jobs, the same figure in the January report. Though the more than 250,000 new slots is impressive, recall the survey is conducted the [Read More …]

Fluid Milk Sales A Ray of Sunshine On a Gloomy Horizon