Preliminary data from a case study shows differences in daily activity and rumination patterns of healthy and sick cows.

Activity monitoring systems have been in use for many years as tools to manage breeding of dairy cattle; the first recorded use of an electronic system for this purpose that I have seen was in 1954. In recent years, there has been a great increase in the number of activity monitoring systems available on the market. Not only are there more options available, but they are used for more than a heat detection tool. These modern activity systems have the ability to monitor rumination, cow temperature, cow location within the barn, cow position (lying vs. standing), eating time, and more. With the increased functionality these systems are being used increasingly to monitor overall cow health.

The transition period, from approximately 21 days pre-calving to 21 days post-calving, is a period of particular concern for the health of the dairy cow. A case study was conducted on a dairy farm in southeastern Pennsylvania to evaluate the effectiveness of an activity monitoring system in detecting changes in daily activity and rumination patterns during the dry period and transition period of Holstein cows. This article presents preliminary findings from that case study.

From March through November 2017 average daily activity and average daily rumination data were collected using an SCR activity system. The farm housed approximately 650 lactating Holstein cows with an average milk production of 88 pounds per cow per day, 3.6% fat, and 3.0% protein. Cows and bred heifers were fitted with activity collars 45 to 60 days prior to the expected calving date. Activity and rumination data were collected from the time activity collars were placed on them until a minimum of the first 60 days post-calving or until cows were culled or died. The farm recorded calving date, date and type of health events (ketosis, retained placenta, displaced abomasum, etc.), and date cows left the herd.

Figure 1. Average daily activity of Healthy, Sick-Recovered, and Sick cows from -45 to 60 days in milk (DIM). 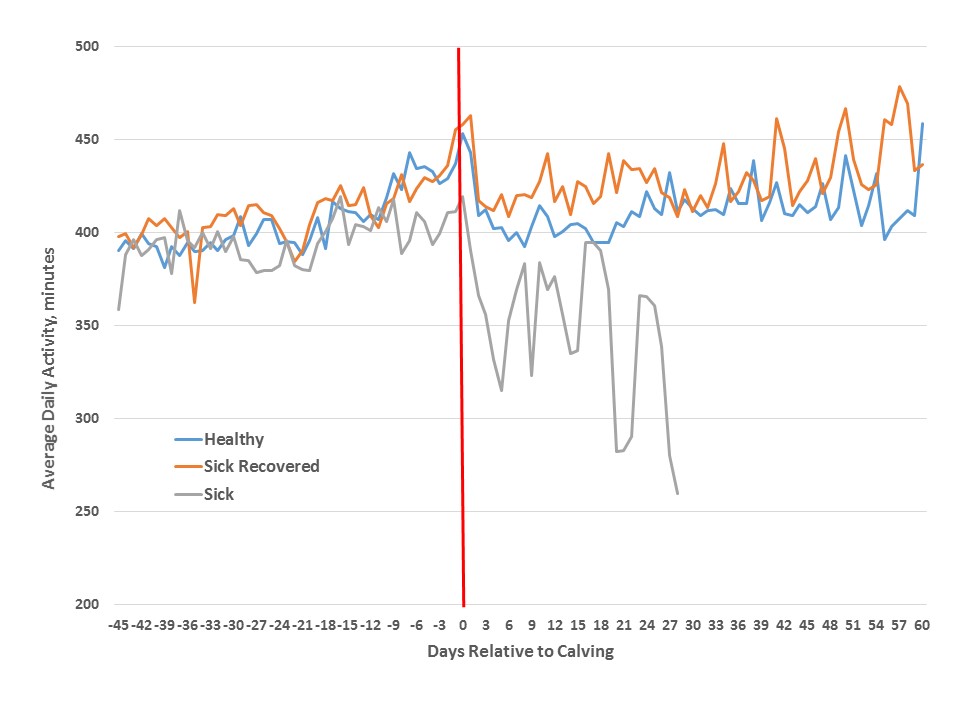 Up until about 10 days pre-calving, the average daily activity of Healthy, Sick-Recovered, and Sick cows was similar (Figure 1). For the next 10 days, average daily activity of the Sick group remained flat, while it increased for the other groups. Activity peaked for all groups around calving and then declined sharply. Following calving the Healthy and Sick-Recovered groups established new baseline activity levels, which they maintained through the first 60 days in milk. Activity levels in the Sick group continued to decline in the days following calving until all animals in this group either died or were sold. The average activity for the Sick group shows large swings in activity from day-to-day. These swings are a result of cows leaving the herd. Prior to leaving the herd, a cow’s activity dropped enough to bring down the group average. When that individual left the group her low average activity was removed from the data, and the remaining cows brought up the level until another individual’s activity dropped and she left the herd.

Figure 2. Average daily rumination of Healthy, Sick-Recovered, and Sick cows from -45 to 60 days in milk (DIM). 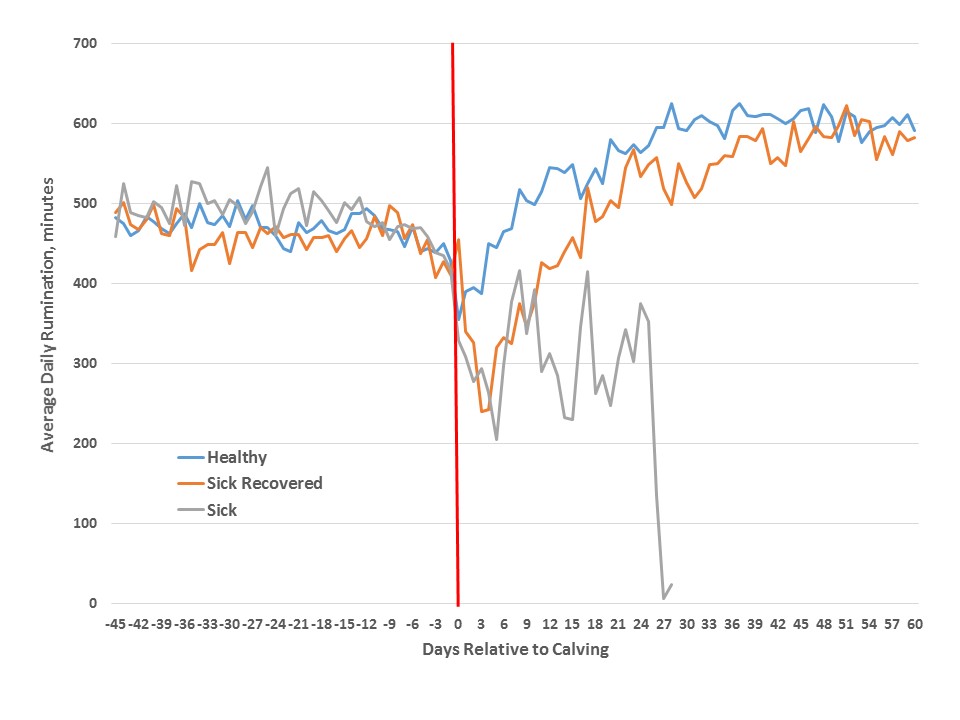 The divergence in average daily activity between the Sick group and the Healthy and Sick-Recovered groups starting about 10 days pre-calving indicated that cows that would not transition well were already experiencing health problems even before calving. This may indicate that these cows could be identified earlier and possibly be managed differently to help them survive the transition period and become productive members of the herd. The challenge is that we do not know exactly what day a cow will calve, so it may make it difficult to identify changes in activity prior to calving date.

While there was little difference in activity between the Healthy and Sick-Recovered groups following calving, average daily rumination differed between these groups for the first 45 days in milk. There may be potential to implement management practices that could speed the recovery of Sick-Recovered cows, returning them to health sooner.

Data presented in this article is preliminary. As analysis of this data continues, plans for future analysis include:

Transition Cow Management Holds the Key to a Successful Lactation

Last time, I talked about knowing your costs of milk production on a per cwt basis. While some may be thinking that knowing this number is great fodder for your local coffee shop conversations, there [Read More …]