Current News
Cattle exposed to pinkeye are at risk of lower calf-growth rates, potential blindness and permanent damage if left untreated.1 It’s estimated that this highly contagious disease causes annual losses of more than $150 million in the United States, affecting over 10 million calves.1

With an emerging species of pinkeye bacteria overtaking the previously predominant species, controlling this increasingly complex disease is challenging for many producers. But there are tools that can help.

Contrary to popular belief that pinkeye is seasonal, it is just as prevalent in the winter as it is in the summer. When irritants cause damage to the cornea of the bovine eye, pinkeye pathogens attack the damaged area, resulting in the following four stages of infection:

Stage 1 – The initial clinical signs of pinkeye include discoloration of the cornea and tearing up in attempt to flush away the irritant. Discoloration is caused by inflammation, making the eye appear slightly cloudy or gray. A corneal ulcer will often appear in the center of the cornea. Additional clinical signs include squinting or fluttering eyelids, sensitivity to light and more.

When gathering diagnostic samples for testing, it is best to collect them at this stage, upon the first signs of tearing up.

Stage 2 – Existing clinical signs may worsen, making the eye appear cloudier from increased inflammation. The ulcer expands across the cornea, and blood vessels extend to the eye in an attempt to repair the damaged area, which causes redness (the source of the nickname “pinkeye”). 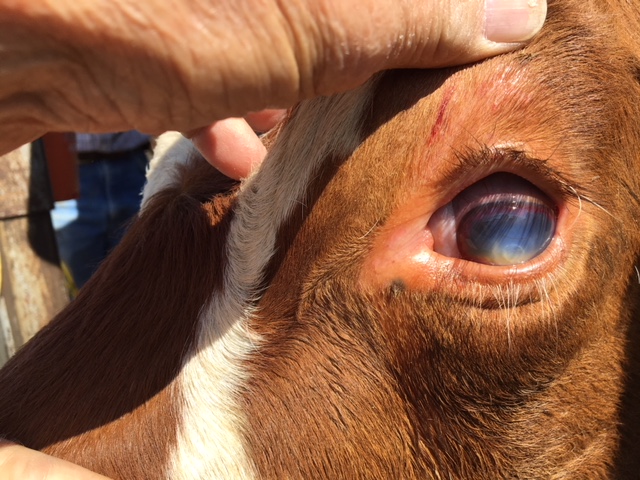 Stage 3 – Inflammation spreads to the inner part of the eye as the ulcer begins to cover most of the cornea. The interior of the eye begins to yellow and fills with fibrin, a pus-like substance. 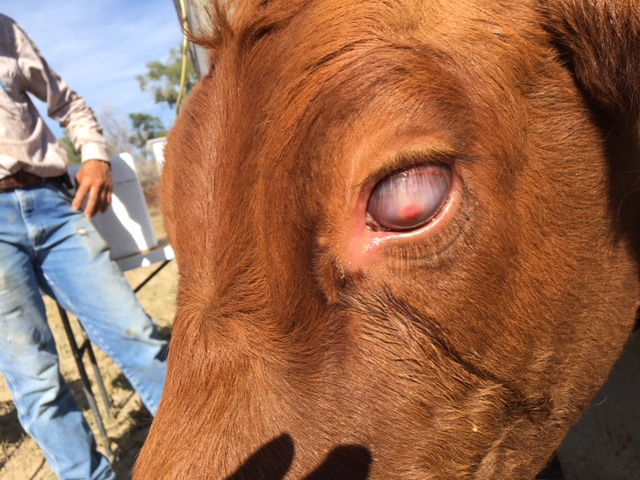 Stage 4 – The ulcer extends through the entirety of the cornea, potentially causing glaucoma, damage to the iris and persistent swelling of the eye. The eye will be at least partially blind, and full blindness could occur if the eye ruptures. 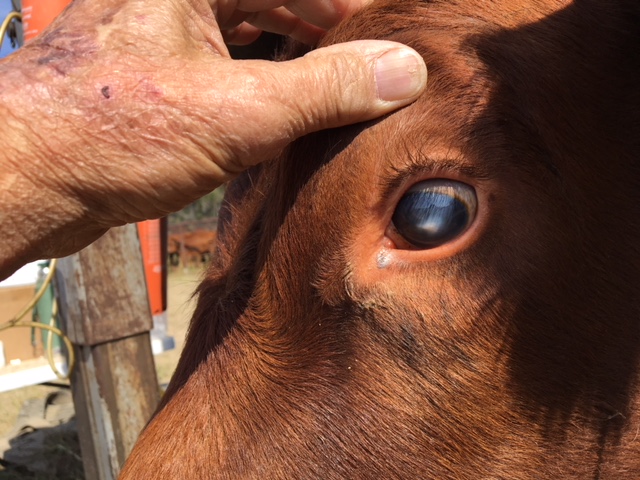 For many years, Moraxella bovis (M. bovis) was the predominant species of bacteria associated with pinkeye circulating in cattle herds.2 About 15 years ago, however, veterinarians in the field began reporting increased cases of pinkeye due to an emerging species, Moraxella bovoculi (M. bovoculi), which is now more frequently detected than M. bovis.2 And more recently, researchers identified Mycoplasma bovis and Mycoplasma bovoculi as bacteria associated with pinkeye.3

Most commercial pinkeye vaccines provide protection against M. bovis, but were not developed to cover M. bovoculi, and no commercial vaccines exist for either Mycoplasma species. To make matters worse, anecdotal reports from the field suggest M. bovoculi can be a more aggressive species and progress more rapidly than M. bovis, underscoring the need for producers to take steps toward controlling the disease.

Custom-made vaccines provide an option to help producers and veterinarians fight various bacterial causes of pinkeye. A key first step is identifying the specific species of pinkeye infecting a herd, such as M. bovis, M. bovoculi or both. Through diagnostics, Newport Laboratories, Inc. can tell producers the species and the strains they’re dealing with and use that information to develop a custom-made vaccine specifically targeted at the species and strains present in a herd. Production time varies according to the organism’s growth rate, but bacterial vaccines can generally be produced in 7–8 weeks, Mycoplasma vaccines in 8–10 weeks, and viral vaccines in 10–12 weeks.

To request a free diagnostics shipping kit from Newport Laboratories, or to learn more about custom-made vaccines, visit www.NewportLabs.com.

“We want dairy cows to be superior athletes in the milking string, however the transition period requires cows to go from zero to 60 miles per hour in a very short amount of time,” said [Read More …]