Considering the unknowns related to weather conditions during the harvest season across the U.S., it is prudent to plan now for possible forage or grain shortages.

July is predicted to rank as one of the hottest in history and along with that came inadequate moisture. Pennsylvania has experienced hit and miss rainfall. Some locations are experiencing drought conditions while others are teetering on the edge. So far this year feed costs have remained consistent pre- and post-pandemic. However, considering the unknowns related to weather conditions during the harvest season across the U.S. and trade conditions with other countries, it is prudent to plan now for possible forage or grain shortages.

Cost of production and feed costs are two critical numbers that require constant monitoring, especially if forage or grain inventories will be compromised. The Extension dairy team summarized financial data for the past 4 years. The top profit herds averaged $17.29/cwt for cost of production and the average for all farms was $19.55/cwt. For this year, the midyear average milk price is between $17 and $18/cwt. It does not look too favorable for maintaining a positive cash flow unless the next 6 months really turn around.

The top profit herds averaged $2200/cow/year for total feed costs, which includes all animals and home-raised and purchased feeds. The bottom profit group spent on average $2600/cow/year for feed. This $400 difference between profit groups can be significant when trying to maintain a positive cash flow. When feed inventories are lacking, typically it is the dry cows and heifers that receive the purchased forages. In today’s environment with sexed semen and an abundance of heifers, this can turn into a money pit.

The heifer enterprise has gained a lot of focus recently because of increased numbers and their influence on the dairy’s bottom line. Heifer feed costs in the Extension dairy team’s data set ranged from $188/head for the most profitable herds to over $700/head for the low profit herds. If the low profit herds are impacted by drought conditions and must purchase additional forages, this could result in extreme hardship for the operation. When considering all expenses for the heifer enterprise, the most profitable farms averaged $1416/head compared to the least profitable at $2900/head. Opportunities exist in the heifer raising program to bring costs in line and possibly reduce heifer numbers to be more in balance with the herd size.

Now is the time to begin assessing the status of crops to estimate inventories and possible short falls. It usually is better to focus on harvesting all corn for silage and have the forage inventory available. It is easier to strategize how to complement the forages since there are many feed alternatives available to examine. Typically, their costs are easier to handle in the budget compared to purchasing large volumes of hay or other forages.

There is no crystal ball to predict the weather or the impact the pandemic will continue to have on markets and the economy. If it appears that drought will impact feed inventory, then start looking at the numbers now to determine the best plan of attack. Projecting out milk income, feed costs, and heifer inventories are good starting points. Measure current feed inventory and based on the status of crops in the field, estimate yields and possible reductions. Planning before others are in the same situation could help ensure purchases are being made when it is still a buyers’ market. 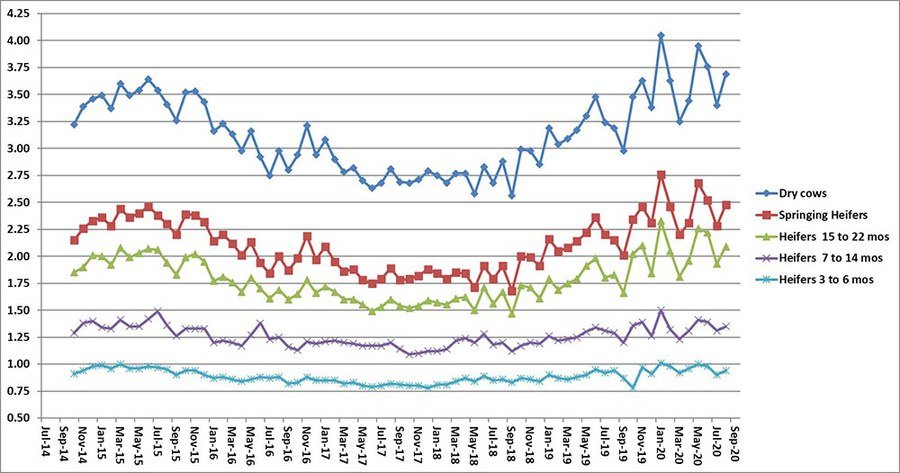