Nutritionists have adjusted rations for protein and phosphorus over the years to benefit the environment, animal performance and improve profitability.

Precision feeding is an effective approach on dairy operations to reduce manure nutrients, specifically nitrogen and phosphorus, and minimize their environmental impact on water and air quality. With the 2025 goals looming on EPA’s Total Maximum Loads within the Chesapeake Bay Watershed, there is renewed interest in feed management. There have been a lot of positive changes in the past decade in ration formulation for protein and phosphorus levels. The challenge is crediting producers on a large scale that have implemented precision feeding to document nutrient reductions.

Many milk cooperatives include milk urea nitrogen (MUN) along with milk fat, milk protein and somatic cell count on each milk pick-up. This metric reflects the nitrogen status of the herd and the ideal range is between 8 to 12 mg/dl. With the inclusion of more corn silage and small grain silage in lactating cow diets, there has been a trend for an improved balance between carbohydrates and protein allowing for improved nitrogen efficiency.

Using data obtained from DHIA, Raleigh N.C. MUN trends were evaluated for years 2009 through 2019 with a more intensive evaluation of the last 5 years. The herds in the data set reflect slightly less than 10% of the Pennsylvania dairy herds. The trend showed a decline in MUNs. Results were within the recommended range of 8 to 12 mg/dl. In 2013 and 2014 MUNs spiked around 13 to 14 mg/dl. For the last 5 years MUNs averaged 11.26 mg/dl and the previous 6 years the average was 12.50 mg/dl. If the DHIA data could be extrapolated to the MUN data from milk cooperatives, this could demonstrate on a larger scale how much less nitrogen is being excreted into the environment, assuming a similar trend exists.

Monitoring phosphorus levels is not as simple. The best metric is to sample manure from the cow to illustrate the effect diet had on excretion. Sampling manure storage has its limitations, especially if it is not adequately agitated and/or if there is a lot of bedding or other waste included that could inflate phosphorus levels. Another way to document reduced phosphorus intake is to monitor dry matter intake and sample the TMR. Table 1 shows results from the crops to cow project where 26 herds were monitored for precision feeding. Using the 2001 NRC requirements for dairy cattle, an acceptable level of phosphorus intake is between 100-110% of requirement. Dry matter intake appears to be the driver for whether herds are meeting that metric. Even though there were only three herds averaging less than 70 pounds of milk, they do show the impact of efficiency on nutrient intake as a percent of requirement. The phosphorus percentages in the rations were reasonable; it was the high dry matter intake for the level of production that caused the elevated phosphorus intake.

Nutritionists have adjusted their ration approaches for protein and phosphorus based on many conversations over the years about the benefits to the environment, to animal performance and to improved profitability. The bottleneck is not the percent phosphorus being formulated, but less than ideal feed efficiency, which in the crops to cow project appears to be on production less than 70 pounds. Forage quality and energy balance could be factors creating this problem. However, as important as monitoring dry matter intake is for decision making regarding ration adjustments, this management practice is still very elusive. Implementing good feeding management practices by producers is going to be the platinum standard to reduce nutrient outputs. Many dairy producers have already implemented precision feeding and are reaping the financial and environmental benefits. There is still opportunity in the industry for improvement and monitoring dry matter intake routinely would be a big step in the right direction. 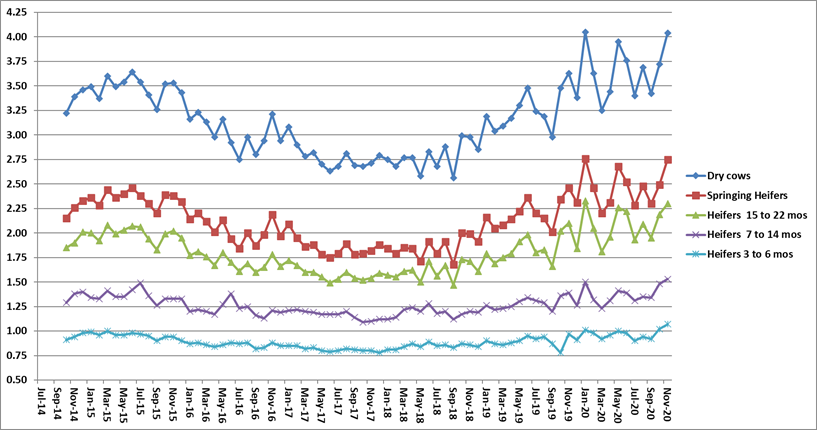 Editor’s note: This article appears in the Penn State Dairy Digest for January 2021

The dairy checkoff was put in place by farmers years ago to increase demand for dairy and to build trust in dairy products and farm practices. When it comes to trust, both consumers and customers [Read More …]

The financial health or profitability of a dairy operation is often the missing link of the farm’s financial picture. When the financials are broken, any attempt to make production improvements may not result in financial [Read More …]