The more we learn about progesterone, the more we realize the intricacies of how it impacts various aspects of reproductive function.

The more we learn about progesterone, the more we realize the intricacies of how it impacts various aspects of reproductive function – oocyte quality, development of follicles, ovulation, fertilization, embryo quality, and maintenance of pregnancy.

In recent years, there has been concern about the impact of increased milk production on progesterone in dairy cows. The increased metabolism resulting from high feed intakes and high milk production causes a decrease in circulating progesterone at critical periods for reproduction (Wiltbank et al., 2014). With suboptimal progesterone, the typical consequences can be Low fertility, increased incidence of twinning, and Pregnancy loss.

Let’s look at three key periods when progesterone has a known impact on fertility.

Each of a female’s many oocytes (eggs) are contained within a follicle on one of two ovaries from before birth. Follicles are recruited throughout a fertile heifer or cow’s life to develop and grow during brief periods of time, called follicular waves. Many follicles and oocytes eventually die off, but a select few develop to the point of ovulation during an estrous cycle. An even smaller number of those oocytes will be subsequently fertilized. The hormonal milieu during a follicular wave has a significant impact on the fertility and fate of an oocyte.

Higher progesterone concentrations in the circulation during follicular wave development correlate to healthier oocytes and more viable embryos (Wiltbank et al., 2014). In an experiment where researchers evaluated week-old embryos from superstimulated cows, a higher number and percentage of embryos were classified as transferable and freezable in the treatment groups which received higher progesterone during development of the follicles (Rivera et al., 2011).

Overall fertility is compromised when progesterone is low during development of a preovulatory follicle. This holds true even with first-wave follicles that develop in association with a small, developing CL and gradually increasing progesterone, which is sometimes the case in timed AI programs (Denicol et al., 2012; Stevenson, 2019). Bruinjé et al. (2019) found that 46.2% of luteal phases prior to insemination had milk progesterone peaks less than 24.7 ng/ml, which was associated with reduced fertility.

The risk of twinning is also related to progesterone. Double ovulation occurs more frequently in cows with low circulating progesterone during development of a preovulatory follicle (Stevenson, 2019). For example, Carvalho et al. (2019) found the incidence of double ovulation to be three times greater for cows manipulated to have low progesterone during a Double Ovsynch protocol (Carvalho et al., 2019), which also resulted in more twin pregnancies (see Figure 1). The frequency of twinning increases with increased parity, increased milk production, and the occurrence of multiple ovulations (Wiltbank et al., 2000). 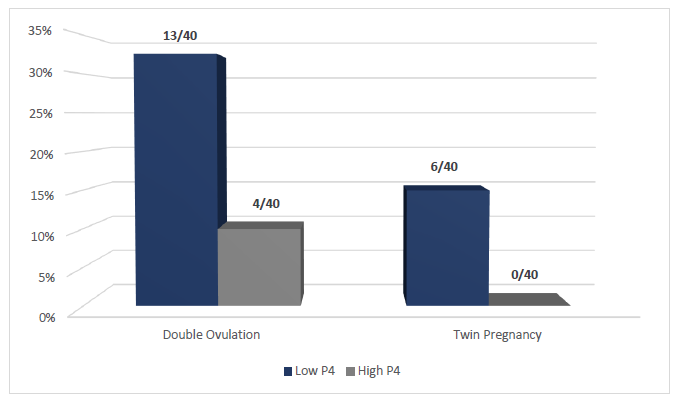 Figure 1 – Frequency of double ovulation and twin pregnancy at 32 days after AI for cows on a Double Ovsynch program manipulated with additional treatments to cause low circulating concentrations of progesterone (P4) during growth of preovulatory follicles (Low P4) or supplemented with additional P4 to ensure high circulating concentrations during growth of preovulatory follicles (High P4; adapted from Carvalho et al., 2019)

When researchers used frequent measurements of milk progesterone to guide timing of AI and determine pregnancy status after AI, approximately 15% of cows were diagnosed as pregnant (consistently high progesterone) at 30 days post-AI but had a decline in progesterone by 55 days (Bruinjé and Ambrose, 2019; see Figure 2). 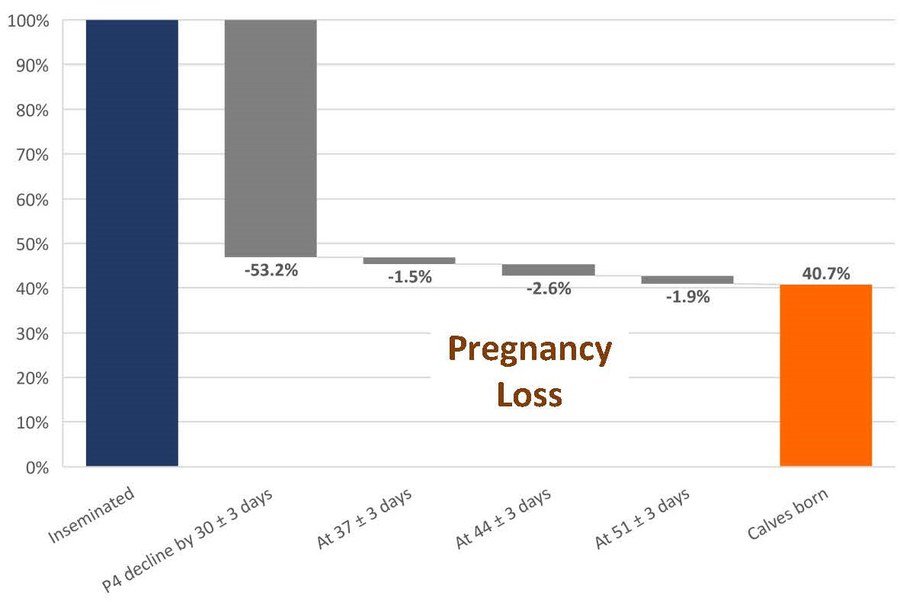 Figure 2 – In the research study of Bruinjé and Ambrose (2019), 1821 Holstein cows were inseminated. By 30±3 days post-insemination, 53.2% of those cows had a decline in milk progesterone (P4) concentrations and were deemed not pregnant. Over the following three weeks, there were additional declines in progesterone, suggesting pregnancy loss.

In a recent research study, milk progesterone concentrations were greater than 0.5 ng/ml before AI 41.7% of the time, a predicament that was associated with reduced fertility (Bruinjé et al., 2019).

After AI, progesterone is essential for maintaining pregnancy. Interestingly, efforts to supplement progesterone for improved retention of pregnancies have not resulted in consistently positive results (Wiltbank et al., 2014). Not only that, but supplemented progesterone between Day 15 and 17 post-AI might also increase the increase the incidence of twins being carried to term (Garcia-Ispierto and López-Gatius, 2017). Bruinjé et al. (2019) found that, if the naturally high concentrations of progesterone are established too soon (3-6 days post-AI) or too late (12 or more days post-AI), reduced fertility could result.

Options for improving progesterone status in a herd can be quite varied.

For those not frequently using timed AI, there is value in frequently measuring progesterone in individual milk samples, but this isn’t always feasible. There are benefits to keeping good records of estrous activity even soon after calving to determine if a cow has been cycling normally before insemination. Another option to consider is simply using more timed AI, which just might cause the desired decrease in frequency of twin pregnancies in addition to more timely insemination, improved conception rates, and reduced embryonic mortality.

For those using timed AI on a regular basis, there are several things to consider. Progesterone issues become problematic when a timed AI protocol such as Ovsynch is used with anovular cows, or when it is initiated during the first follicular wave of the estrous cycle. In both cases there is not a large enough CL present at the beginning of the protocol, thus progesterone concentrations are not ideal.

Some protocol suggestions to consider are:

If reproductive performance in your dairy herd needs improvement, take a close look at how suboptimal progesterone concentrations circulating through the cows might be limiting fertility. Investigate how protocol changes might improve progesterone status and reproductive success.

Participants will learn about the potential for growing and marketing hemp products Are you interested in growing or processing hemp in Pennsylvania? Would you like to learn more about this rising industry? Learn more as [Read More …]