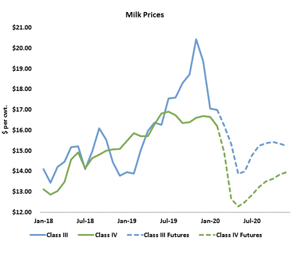 Red ink flooded LaSalle Street this week. The dairy markets were decimated. Every Class III and Class IV contract on the board scored new life of contract lows. The selloff was steep and widespread, but second-quarter contracts suffered most. May Class III plummeted $1.44 to a painfully low $13.87 per cwt. May Class IV fared even worse, falling $1.79 to an unbearable $12.28. At today’s prices, dairy producers in a region with roughly half of their milk check derived from Class III and half from Class IV will earn just $13.08 per cwt., and $13.83 on their Class I share.

Those numbers clearly won’t pay the bills, and after four painful years (and a couple good months) dairy producers are in no shape to weather this storm. Congress set aside billions of dollars for agricultural aid and for food purchases as part of its $2 trillion aid package, but the timing and structure of these payments are still unknown. The dairy safety net will provide a financial cushion for those who enrolled, but low participation in these programs reveals that many are vulnerable to the whims of an increasingly cruel market. Dairy producers insured quarterly floor prices on about 20% of the nation’s milk through Dairy Revenue Protection (DRP). Barring a steep recovery in milk prices, most of these policies are projected to pay indemnities. Less than half of all dairy producers representing 56.2% of the nation’s established milk production history – and a somewhat smaller share of today’s greater milk production – enrolled in the Dairy Margin Coverage (DMC) program, which is now projected to make payments in March through December. It’s likely that many dairy producers who signed up for DRP also enrolled in DMC, so much of the nation’s milk will be sold at very low values, without any safety net protections at all. Unless creditors are exceedingly patient, the industry is likely to suffer a tidal wave of sellouts. 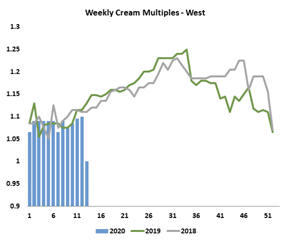 The impact of Covid-19 is beginning to disrupt milk processing along the East Coast. Amidst fear of contagion, some of the labor force is staying home, forcing plants to run below capacity. As a result, more milk is sloshing around the rest of the nation and more tankers are hauling milk greater distances at a discount, even as fluid milk bottling remains elevated. Milk continues to fly off the shelf at grocery stores, although sales are not quite as high as they were during the initial panic-buying surge. Fluid milk is the lone bright spot in the dairy complex. Milk bottlers are skimming off huge volumes of cream, and churns are running hard. Cream is particularly abundant in the West, where cream multiples – the factor used to convert the butter price to a cream price – have dropped to multi-year lows. 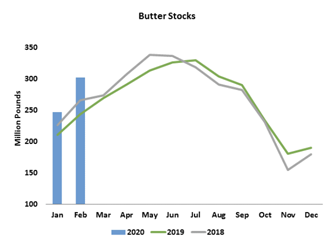 America’s refrigerated warehouses were already bursting with butter before milk bottling ramped up. USDA reports that on February 29 there were 302.3 million pounds of butter in cold storage, the highest total for the month since 1993 and nearly 55 million pounds more than on January 31. The month-to-month build marked the largest January-to-February increase since 1992. February butter inventories are 24% higher than they were a year ago. We’re now adding to that stockpile, and the market is feeling the pressure. CME spot butter plunged 26.75ȼ this week to $1.4875 per pound, its lowest value since October 2013.

The cheese market was much healthier coming into the crisis. Cheese stocks climbed only slightly from January to February. At 1.36 billion pounds, February cheese stocks were 0.5% lower than a year ago. 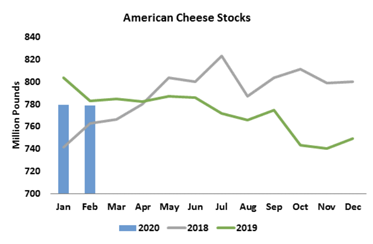 Inventories of American-style cheese, including Cheddar, were down 0.6%. Cheese is moving quickly at retail, but it is likely not replacing all the lost demand from foodservice. Although pizza delivery franchises are moving a lot of product, sit-down restaurants are not, and mozzarella sales are down. That means cheese makers are likely making a lot of commodity Cheddar. This week both blocks and barrels dropped to one-year lows. Spot Cheddar blocks fell 24.75ȼ to $1.59. Barrels closed at $1.34, down 9ȼ since last Friday.

Sales patterns are similar in Europe, with cheese moving in large volumes through retail channels. However, some European cheesemakers are finding it difficult to obtain the materials necessary to repackage bulk cheese into retail-friendly sizes. As the bloc struggles to contend with border controls for the first time in decades, bottlenecks are slowing the flow of product from the warehouse to grocers. That’s likely to translate into lost demand despite robust consumer appetites. European cheese stocks were tight before Covid-19 slowed markets. European cheese production grew just 0.3% year-over-year in 2019, and exports impressed. In January, Europe sent 19% more cheese abroad than it did the year before.

They spot whey market is holding steady, which is a victory in this environment. CME spot whey powder didn’t budge this week; it stands at 33ȼ per pound. The futures gained ground. In January and February, China imported 4.6% more whey than in the first two months of 2019, after adjusting for Leap Day. The U.S. continues to regain market share now that China has rescinded its punitive tariffs on U.S. whey. 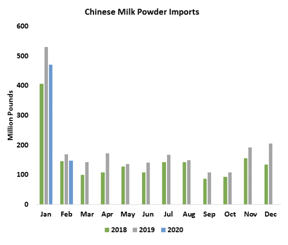 Although Covid-19 was already raging through China in January and February, milk powder imports were better than feared. Combined imports of skim and whole milk powder fell 11.7% from a year ago, when Europe was aggressively moving out its Intervention stockpile and China was buying record volumes of cheap milk powder. Given slowdowns at Chinese ports and reports of very high domestic milk powder output earlier this year, these figures were positive. Now, however, the global trade has stalled. Sporadic port closures are likely to entangle international freight, and foreign buyers have lost considerable purchasing power. The milk powder market is the most dependent on exports, and it is likely to remain under pressure until the impacts of the virus subside. This week, CME spot nonfat dry milk (NDM) dove 6.75ȼ to 92ȼ, the lowest spot value since December 2018. Covid-19 has erased years of hard-won gains in the dairy markets.

Ethanol plants are slowing output or closing their doors altogether, disrupting the feed markets throughout the Corn Belt. The corn basis had been sky-high since the rains became problematic last spring, but now the basis is close to zero in much of the Corn Belt. Cash corn values are down hard. Dairy

producers and other livestock growers who fed distillers grains will have to adjust their rations, which likely means more soybean meal purchases. Unfortunately, soybean meal is one of the few commodities that has been rising in value.

The soy complex got some further support this week from fears that Argentina would halt exports. Port workers are demanding closures so that they can stay home until the virus recedes. But Argentina depends on export taxes and is likely to try to keep product moving, albeit at a slower pace.

CA: Dairy Nutrition in Schools in the Time of COVID-19

As summer comes to a close and the new school year begins, COVID-19 continues to have an impact, especially within the school community as many students, teachers and families start with distance learning. To support educators, Dairy [Read More …]