Study estimates use of natural resources in the food system

The U.S. food system comprises all businesses that are either directly or indirectly involved in producing and marketing food products, such as the producers of farm inputs like fertilizers and machinery, the farmers growing food and feed commodities, and the processors making food products, plus the food merchants and eating places where U.S. consumers spent over $1.8 trillion on food and beverages in 2018. Natural resources—land, water, minerals, air, and forests—provide materials and services necessary to produce and market the food we eat. To supply the food production to meet the food demand of a growing population, it is important to understand the U.S. food system’s impact on these natural resources. This report concerns only the food system’s production and marketing of food products for purchase by or for all American food consumers.

Three main factors determine the resource requirements of food demand: Population (how many consumers?), diet (what will they consume?), and technology (how will our food system produce, market, and preserve our food supply?). This study focused on the use of natural resources in the U.S. food system by examining recent research on one of these factors, diet, to illustrate how food choices can affect use of resources.

What Did the Study Find?

We estimated use of natural resources in the food system for a set of age and gender-specific Baseline diets, based on food consumption in 2007, and compared results to those for a set of Healthy American diets based on the 2010 Dietary Guidelines for Americans. The study produced the following insights:

2. Substantial resource requirements occur beyond the farmgate. The stages of the food system most reliant on natural resources differ substantially across the five resources considered. Land use and freshwater withdrawals were both resourceintensive on-farm in 2007. Conversely, agriculture accounts for less than half of total resource use for the Baseline diet of fossil fuels, air (as a GHG repository) and forestry products; the majority of these resource requirements are in supply-chain stages further downstream.

3. The modeled Healthy American diet would lead to significant changes in food consumption compared to Baseline diets. The Healthy American diet is based on the diets of Americans who met all 2010 USDA Dietary Guidelines for Americans in 2007, as determined by an analysis of a nationally representative survey designed to assess the health and nutritional status of Americans. Consumption in the fruits, vegetables, legumes/nuts/seeds, eggs, and dairy categories would increase, while consumption in the sugars/sweets/beverages, fats/oils/salad dressings, grain products, and meat/ poultry/fish/mixtures food groups would decline. The composition of food items within each food group would change, as well as the categories’ total calories.

4. A shift to the modeled Healthy American diet in 2007 would have decreased use of some resources but increased the use of others. This scenario assumes a shift that aligned all Americans, on average, with the Healthy American diet, and that the food system had not changed its production methods. Use of productive agricultural land, fossil fuels, and forest products would have decreased, while freshwater withdrawals increased. Use of air as a repository for diet-related greenhouse gas emissions (GHG) would have remained essentially unchanged with a conversion to the Healthy American diet. Reductions in GHG emissions linked to reduced fossil fuel use would have been offset by increases linked to biogenic emissions.

This study also presents a framework for a broader empirical analysis of sustainable pathways to producing a healthy and adequate food supply that accounts for population and technology change. The authors found that several ERS models provide useful frameworks along these lines.

How Was the Study Conducted?

Given the high level of uncertainty about eating patterns and technologies looking ahead, we developed a range of scenarios with an array of model frameworks to study potential outcomes. At the time of the recent ERS analysis that this report builds on, the 2007 National Benchmark Make and Use Tables for the production model of our analysis, published in 2015, provided the latest data of sufficient detail for this purpose, so our analysis is based on the 2007 U.S. food system. We use a mathematical optimization model to define diets using the attributes of individual food items consumed by Americans in 2007. We use an environmentally extended economic model, FEDS-EIO, to account for the use of natural resources throughout the entire food value chain from farm inputs through home kitchen operations. We use a biophysical model, Foodprint, to estimate land and animal inventory requirements of producing all food commodities embodied in the model-derived diets. Model results from this research do not include any international resource use embodied in imported food and ingredients and do not account for any U.S. resource use for the production of food exported to other countries. 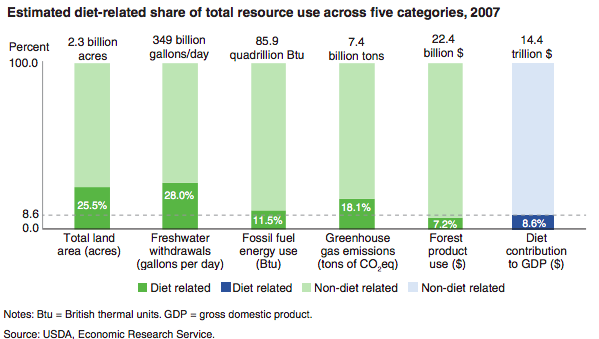 Is the “organic” seal worth it, given disputes?

Disputes over rules, questions about adherence, may raise doubts over extra price Is paying more for organic milk, meat or a can of beans worth it? The “USDA Organic” label generally signifies a product is [Read More …]

The 26th Annual Professional Development Conference was Held in Madison, Wisconsin, Mar. 14-15 Keeping an eye on the future was a common theme during the Professional Dairy Producers® 2018 PDPW Business Conference in Madison on [Read More …]