Current News
Milk pricing in the U.S. is incredibly complicated. One particular feature of milk pricing that always seems to rub dairy farmers the wrong way is negative producer price differentials – a line item on the dairy farmer’s milk check that reduces the mailbox milk price. Negative PPDs occur when the classified value of milk in the Federal Milk Marketing Order pool is less than the component value of milk, resulting in a reduced minimum regulated milk price. In June 2020, negative PPDs across the U.S. were expected to be record large because of COVID-19-related price volatility, a recent change to FMMO milk pricing formulas in the 2018 farm bill, and mass de-pooling of milk, i.e., Negative PPDs to Offset Milk Price Rally. 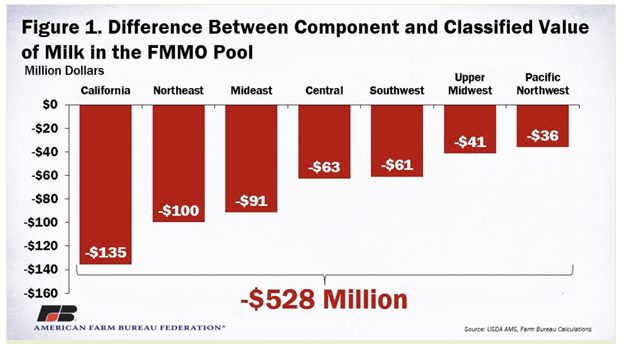 To determine each FMMO PPD, the difference between the component and classified value of milk in the pool is divided by the total pounds pooled on the FMMO. For June 2020, PPDs range from -$7.91 in California to -$3.81 in the Upper Midwest. Announced PPDs are then adjusted higher or lower based on the producer’s location differential (Background on Class I Location Adjustments). In general, a producer located southeast of the pricing location will have a higher (less negative) PPD than a producer located northwest of the pricing location. Figure 2 highlights PPDs by FMMO at the principal pricing point. 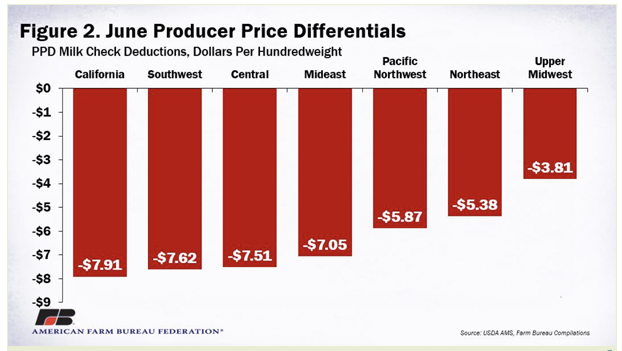 Normally, milk manufacturing plants and cooperatives draw revenues from the FMMO pool to pay the regulated minimum milk price to their producers. However, when the manufacturing milk price exceeds the Class I milk price, there

is an economic incentive to not pool (de-pool) manufacturing milk to avoid paying into the FMMO pool. Handlers and cooperatives de-pooling milk can then keep the proceeds from the sales of higher-valued dairy commodities instead of paying them into the pool. With these funds, cooperatives and handlers can pay higher prices to their producers through higher premiums or a 13th check, use it as retained equity, or use it to offset anticipated or previously incurred operating, marketing or balancing costs.

Given the record-large spread between the June Class III milk price and the June Class I milk price, negative PPDs and mass de-pooling were expected in all FMMOs. Across the seven component pricing orders, 8.2 billion pounds of milk was pooled in June, down nearly 5 billion pounds, or 37%, from the prior year’s pool volume. The largest change in the FMMO pool volume was the Upper Midwest, where 2.2 billion fewer pounds of milk were pooled in June 2020 compared to 2019, a 66% decrease. Given that milk production in June was higher year-over-year, it’s highly likely that the change in the pool volume is due to de-pooled milk. Moreover, had this milk been part of the FMMO pool, PPDs across the U.S. would have been less negative. Figure 3 highlights the year-over-year change in FMMO pooled pounds. 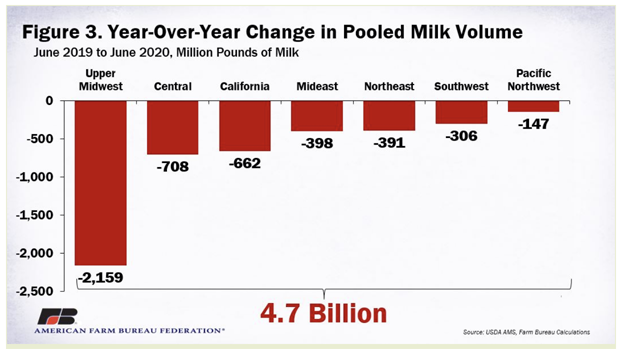 Due to COVID-19-related price volatility, a recent change to FMMO milk pricing formulas in the 2018 farm bill, and mass de-pooling of milk, negative PPDs across the U.S. were record large in all but the Upper Midwest FMMO. Negative PPDs ranged from a low of nearly -$8 per hundredweight in California to -$3.81 per hundredweight in the Upper Midwest. The impact on farmers’ milk checks will vary. Handlers and cooperatives with a high Class III utilization may use the higher Class III proceeds to shield their producers from the negative PPDs. Handlers and cooperatives without a high utilization of Class III milk will likely pass along much of the negative PPD through milk check deductions or adjustments to the component values, i.e., lower butterfat and protein prices.

As a result of the negative PPDs, and the inability of public and private risk management tools such as futures, options or Dairy Revenue Protection (which is based on futures prices) to protect against a negative PPD, dairy producers across the country are once again focused on FMMO reform and methods to address negative PPDs and de-pooling. Eliminating the advanced pricing component, reconsidering the higher-of pricing formula and requiring mandatory pooling of milk in all classes are among the most talked-about options.

Another policy that should be discussed before considering modifications to FMMO rules is allowing dairy farmers to vote individually and confidentially during the FMMO referendum process, i.e., modified bloc voting. Giving farmers a bonafide voice and a vote during FMMO reform will ensure that dairy farmers, now and in the future, are involved in crafting the milk pricing rules and regulations that impact their farm’s profitability. FMMO reform is long overdue, but even more overdue is giving farmers a say in how their milk is priced and pooled.

The Agriculture Department published in the March 30 Federal Register a long awaited final decision to establish a Federal Milk Marketing Order (FMMO) for California. The proposed FMMO would incorporate the entire state of California. [Read More …]

Leaders of the California Dairy Campaign and the state Farmers Union gathered Aug. 22 to celebrate the implementation of a Federal Milk Marketing Order for California.  Former dairyman and Holstein breeder Joe Vierra hosted the [Read More …]

This Week in Dairy Reports on The California FMMO

The California Federal Milk Marketing Order officially began on Nov. 1. With nearly 20% of the nation’s milk supply, it will not only affect California producers but its impact will be felt across the country. [Read More …]