Concerns about worsening demand are colliding with rising supplies as milk floods the market.

Coronavirus infections are rising relentlessly, and they threaten to swamp the economic recovery. That’s likely to stifle demand for dairy. More students are learning remotely and businesses and families are sizing down their holiday festivities. Concerns about worsening demand are colliding with rising supplies as milk floods the market. 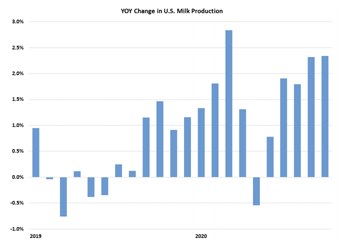 U.S. milk output totaled 18.6 billion pounds last month, up 2.3% from October 2019, and on par with the strong year-over-year gain reported in September. Dairy producers continue to achieve impressive advances in milk production per cow, with milk yields up 1.9% from a year ago. Since July, U.S. milk output per cow has grown at the fastest rate since early 2017. This suggests that the primary drivers are investments in better facilities and accelerating progress in genetics and breeding technologies, rather than more temporary factors like favorable weather. Given the long-term impact of these practices, the industry should expect that milk yields will continue to outpace the prior year by a wide margin unless they are held down by supply management programs in the spring. 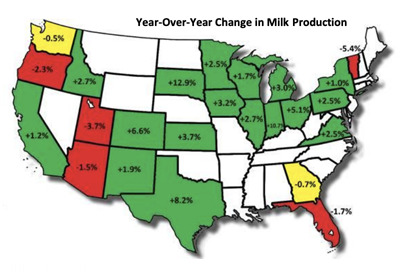 The dairy herd is growing too. According to USDA’s latest estimates, dairy producers added 15,000 cows in September and another 14,000 in October. The milk-cow herd averaged 9.39 million head last month, which is 62,000 head larger than it was in October 2019. The dairy herd hasn’t been this big since July 2018. Persistently low slaughter volumes suggest that the herd is getting larger by the day.

Foreign milk production is also climbing. Collections in Europe and the United Kingdom topped the prior year by a respectable 1.4% in September. New Zealand reported a 1.7% increase in 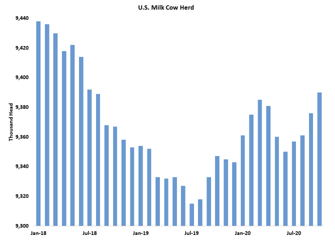 If the U.S. dairy industry is going to expand at this rate, we will need to step up exports, but that will be difficult with our competitors growing too. The weak dollar and relatively low dairy product prices should help, but the industry continues to cede ground on the policy front. This week 15 Asia-Pacific nations signed the Regional Comprehensive Economic Partnership (RCEP), the world’s largest free trade agreement. Signatories include dairy exporters Australia and New Zealand, and key importers like China, South Korea, the Philippines, and Vietnam. Although the RCEP may not do much to change the already advantageous access dairy products from New Zealand and Australia enjoy in much of the region, it signals that U.S. allies view China as a key trading partner. In the past few years these nations have forged ahead with an alphabet soup of deals, including the CPTPP, and Europe has inked several major pacts as well. The U.S. has done little more than swap NAFTA for the USMCA. The U.S. is a reliable supplier of affordable, highquality dairy products. It would be a shame to let them pile up due to policy inertia. 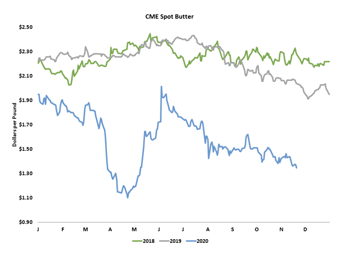 CME spot butter fell 5.5ȼ this week to $1.345, its lowest value since the spring panic and more than 70ȼ below where it stood a year ago. Butter is moving quickly at retail, but at-home bakers are going to have to be very ambitious indeed to make up for lost foodservice orders.

The spot cheese markets moved higher today for the first time in three weeks, suggesting that the selloff may be running out of steam. But a one-day rally was not enough to undo the damage wrought by their early-week battering. Cheddar blocks plummeted 27.25ȼ from Friday to Friday and closed at $1.645, within a few cents of the 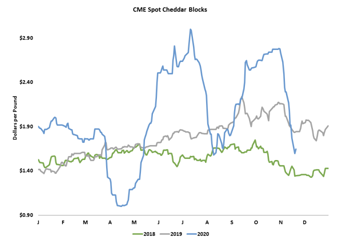 The spot cheese markets dragged nearby Class III futures down with them. The December contract settled today at $15.98 per cwt. That’s $1.73 lower than last Friday and more than $5 below the late October high. January Class III also moved lower, but deferred contracts gained ground in hopes that lower pricing in the coming months will discourage growth in milk output and perhaps stimulate demand. Most

Class IV contracts settled 20ȼ to 30ȼ in the red, which puts November through February Class IV south of $14. Those numbers simply don’t work for dairy producers, especially with feed costs on the rise.

December corn closed today at $4.2325 per bushel, up nearly 13ȼ from last Friday. January soybeans set a fresh life-of-contract high and settled at $11.81, up 33ȼ. December soybean meal climbed $6.60 this week to $394.70 per ton. The bulls are eating exactly the same ration as they did last week, digesting concerns about dry weather in South America and the U.S. Plains and feasting on another big week for U.S. corn and soybean exports.

PRO-DAIRY specialists have developed Managing During COVID-19 a series of new and updated resources to help farmers navigate through the uncertain environment created by COVID-19. Recognizing the range in circumstances faced by farmers across the [Read More …]

China: What Does it Mean Now?

Today, the United States and China signed a long-awaited Phase One trade deal that, as expected, substantially addresses trade in food and agricultural products. Under the agreement, China has signaled it will purchase and import [Read More …]

National Mastitis Council (NMC) recognized the best of the best when it comes to quality milk production at its Feb. 1 Awards Luncheon, held in conjunction with the NMC 58th Annual Meeting in Savannah, Ga. [Read More …]