Robotic milking dairies have been increasing since the first commercial dairy installed an Automatic Milking System (AMS) in 1992, and there are not any signs that would suggest the increased adoption of this technology will stop anytime soon (Koning, 2010; Figure 1). Reduced labor, more schedule flexibility allowing dairy farmers a better social life, and vast amount of information gathered at a cow level are just some of the benefits AMS provide. However, with the increase in robotic technologies, it is important to consider a few things such as potential employment skills that will be needed in the future. 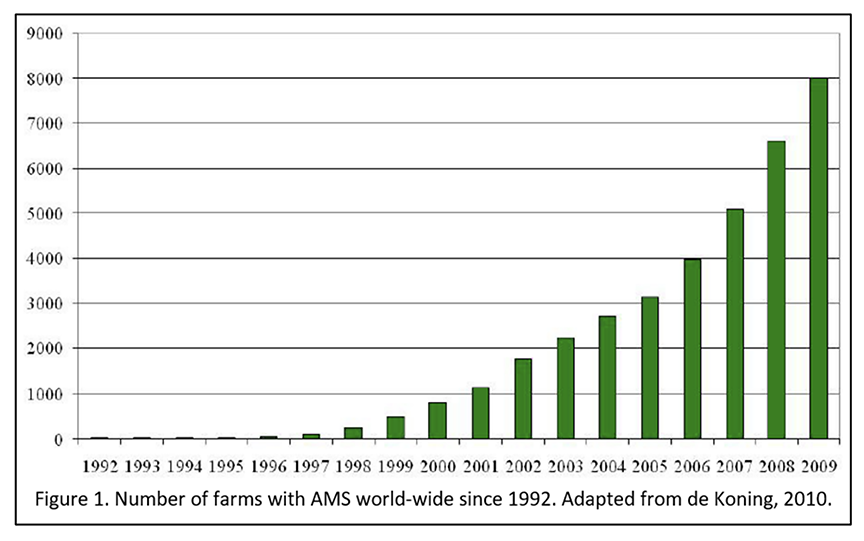 What do milking robots do?

Robotic milking systems allow for dairy cows to enter a milking machine voluntarily to be milked. There is a sensor that detects an RFID ear tag that will indicate if she is ready to be milked or if she is a “frequent flyer” only trying to get more treats (i.e., pellets fed at the milking robot unit). Dairy farms using AMS frequently use other technologies, such as sorting gates, robotic feed pushers and wearable precision technologies in cows (e.g., activity monitors a.k.a. “cow Fitbits”, rumination collars). All these technologies further reduce labor needs by detecting and sorting cows in heat and ready to be bred to a special pen. If the cow needs to be bred, the sorting gate can defer her after milking to a separate pen allowing breeders the ease of going to one smaller location to breed cows. In addition, these technologies flag and sort cows that are down in activity and rumination and thus might be experiencing early symptoms of a disease to be screened and provided early treatment if necessary. Furthermore, milking robots can record milk yield, components, conductivity, at a mammary quarter level and flag cows that might have mastitis. Cows detected to have mastitis, can be deferred to a pen after milking indicating she is sick and her milk will be redirected so it does not enter the milking system.

Why chose robots to milk cows?

Milking robots bring several advantages to dairy producers. Reduced need of labor is one of the main advantages of these systems and was the main driving factors to start the development of the AMS. Milking consumes significant time in dairy farms and takes around 25% to 35% of the labor demand on a dairy farm operation (de Koning, 2010). In addition, in small farms, these activities are frequently performed or supervised by members of the family, thus this technology also has an impact on the social life of dairy farmers, allowing more schedule flexibility by not being tied to milking schedules.

What should be considered?

Although there is a reduction in physical labor, the increased technical labor needs to be considered. Even though the number of laborers changes, the skill set needed will increase. Thus, are robotics the choice for you? When deciding if you should switch to a different style of facility, consider not only the cost of implementation but also the skill set knowledge of employees and increased costs associated with such skills. Other important aspects to consider when deciding to invest in AMS are:

Should I expect an increase in milk production with AMS?

It depends, in AMS cows voluntarily get milked on average every 8 hours, which corresponds with 3 milkings per day. If you have a dairy where you were milking twice daily, by switching to AMS and having an increase to 3 milkings/day we could expect around 15% increase of milk yield just because of the effect increased milking frequency (Erdman and Varner, 1995). However, this assumption could vary and will depend on genetics, environment, nutrition and management in the new facility.

Oh USDA Reports, Where Art Thou?