Time is of the essence when cows are under stress. Whether cows are stressed by weather, disease or ration issues, the more quickly a problem is solved, the faster cows return to optimal production levels, and the lower the potential economic loss. Yet, finding stressors, especially due to ration inconsistencies, and fixing the problem quickly is one of the hardest things to accomplish on a dairy.

On many dairies, the amount of milk in the bulk tank is the first clue that a problem exists. Unfortunately, it may take several days or longer for a stress event to cause a noticeable drop in milk production. And, when measuring whole-herd milk production only, the drop in output cannot be traced to a specific group or cow, and the impact may be diluted if the problem affects only part of the herd.

A more effective way of identifying problems is through rumination monitoring of the herd and individual cows. Reduced rumination time signals a stress event before a decline in milk yield becomes apparent.

The graphs below demonstrate a real-world example of how rumination data can prevent economic losses. Data is from 209 cows on an 800-cow dairy using an animal monitoring system that tracks both rumination minutes and daily milk weights. With a close eye on these metrics, the manager was able to pinpoint a specific time when a ration inconsistency occurred due a mixing error—and fix the issue within a relatively short time frame.

In the graphs, the green line indicates daily average milk yield and the light blue line indicates daily average rumination. Red vertical lines highlight key dates in the stress episode. Green and blue lines on this graph have little variability in the days prior to June 29, showing that cows are comfortable and producing normally, with 575 average minutes of daily rumination and average milk yield of more than 105 pounds per cow per day. 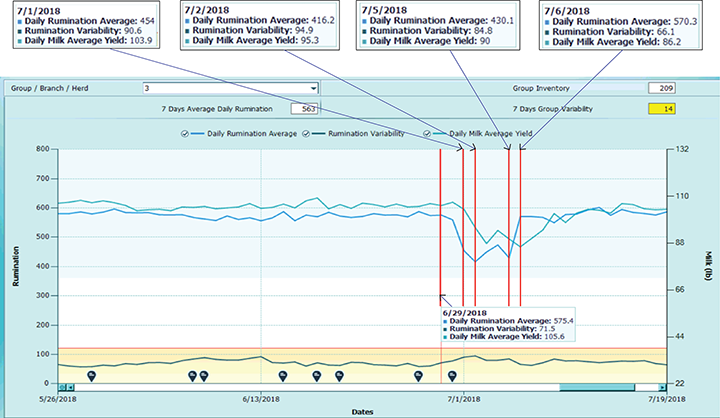 The next day, the total mixed ration (TMR) delivered was not mixed thoroughly and contained the wrong ingredients. The graph reveals immediate negative effects on the cows, with rumination time dropping dramatically to 454 minutes—a more than 20 percent reduction. Yet, average daily milk yield stays relatively high at nearly 104 pounds per cow.

The decrease in rumination is discovered by the farm management on July 2 after the cows had been fed that morning. Average rumination minutes continue to decrease from the previous day and now daily average milk yield starts to plummet. After the ration problem is corrected for the afternoon feeding, rumination starts to increase again almost instantly.

Between July 3 and July 4, the temperature is close to 100 degrees Fahrenheit, causing severe heat stress for the herd. We don’t see a large jump in rumination until July 5, when the temperature goes down to a more comfortable level for the cows.

Without animal monitoring technology, it would have taken at least two days for this dairy’s manager to notice milk production decrease—then find the source of the problem, fix it and wait for a milk production response, a process that would have taken a few more days. Meanwhile, the economic impact would have been much more detrimental, especially considering the dual issues of ration problems and heat stress. By paying close attention to rumination data, managers can get a better handle on what’s happening in the herd and head off potentially severe economic losses.

Consumers’ preferences are influenced by the science on dairy fat and its impact on a healthy diet, the OECD-FAO Agricultural Outlook 2018-2027, has noted in its publication which was released today. Welcoming the report IDF [Read More …]

On World Milk Day, DFA Celebrates and Rejuvenates an Age-Old Classic with the Debut of Mülü