Six unique and historic Holstein items will be auctioned with all  proceeds donated to the newly established Gary Dinsdale scholarship at Fresno State.  According to Ken Melvold, Fresno, Calif., these items will be sold at his Christmas Holiday dairy consignment sale to be held Dec. 15 at the A & M Livestock Auction in Hanford, Calif.  There will  be 70 head of high-quality Holstein and Jersey young cows and heifers and even a few Swiss from top breeders in the West.

“Gary Dinsdale had a lifelong commitment to the dairy industry before his untimely passing in 2008,” explains Melvold.  “He was a Fresno State graduate and member of the dairy cattle judging team during his undergraduate career.  This scholarship supports the continuing revitalization of the dairy department at the school  ,” he says.

Items to be sold include an antique oil painting by a noted artist of a historic Holstein cow, a commemorative belt buckle from longtime Fresno State Dairy Department head Dr. Robert Selkirk, plaques depicting the original True Type Registered Holstein cow and bull from 1922 and a sale catalog and convention program from the 1949 National Holstein Convention held in San Francisco.

Donations have started coming into the scholarship, according to Melvold and co-chair Joann Selkirk Evans.  The scholarship will be administered by Fresno State and contributions are to be made payable to the Ag One Foundation.  Proceeds will be used to assist students majoring in dairy science or dairy related ag business.

For more information about the sale, the scholarship and these special items, contact Ken Melvold at 559.906.1714.

Here are the items being offered on: 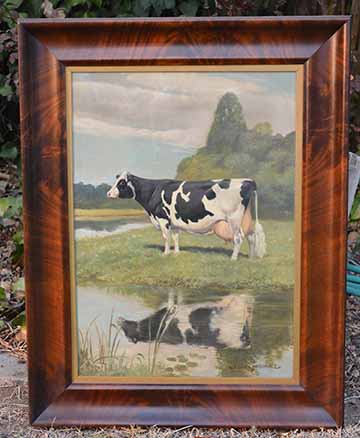 1. A full-color beautifully framed antique oil painting of an historic Registered Holstein, Mabel Segis Korndyke, the first young cow to produce 40 lbs. of butterfat on 7-day test circa 1913. The painting was originally the property of Paul B. Misner, the famed Holstein breeder and  manager behind Dunloggin, Bell Farm and others.  The artist is Edwin Megargee, a noted New York livestock artist who painted the original Holstein True Type cow and bull in 1922 for the Holstein-Friesian Association.  Famous for his portraits of many breeds of dog, he also created the image of the greyhound used on Greyhound Buses.

The painting with frame measures 26 X 33 inches and it will be sold with the original letter conveying the painting from Misner to Maurice Prescott, 50-year editor of Holstein-Friesian World.

2. A sterling silver western belt buckle with gold highlights created and worn by Prof. Robert Selkirk to commemorate the successful Fresno State dairy judging teams he coached from 1948 to 1977.

3. Full color hard-back prints ready to frame of the original True Type Registered Holstein cow and bull, taken from the paintings first created in 1922 by Edwin Megargee working with a committee of breeders for the Holstein-Friesian Association. Originally from the Dinsdale family. 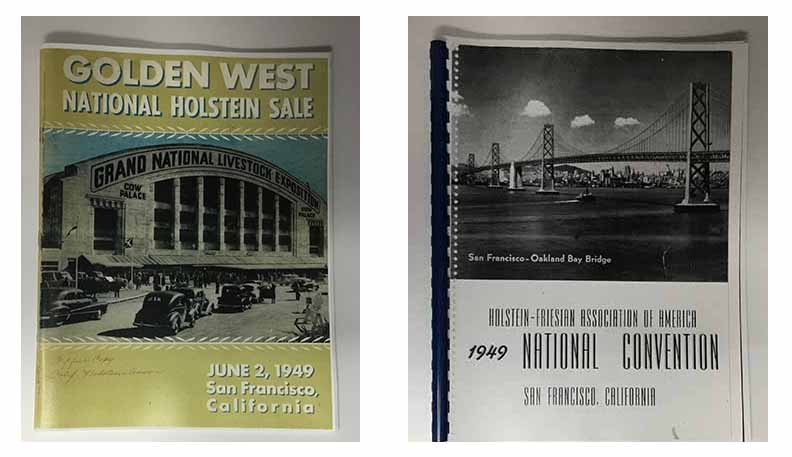 Special Holstein Memorabilia to be Auctioned for Dinsdale Scholarship

Six unique and historic Holstein items will be auctioned with all  proceeds donated to the newly established Gary Dinsdale scholarship at Fresno State.  According to Ken Melvold, Fresno, Calif., these items will be sold at [Read More …]