Cheddar markets lost a lot of ground, but tried to put up a fight. Barrels regained some territory signaling that the market is fumbling about for fair value. 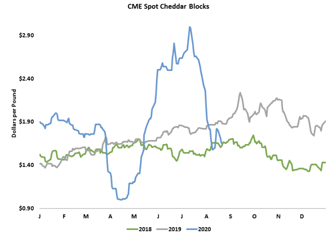 The spot Cheddar markets retreated once again. They lost a lot of ground, but they at least tried to put up a fight. Barrels regained some territory late in the week, signaling that the market is fumbling about for fair value. Blocks lost ground every day, but they still finished higher than last week’s lows. Both blocks and barrels closed 17ȼ in the red, preserving the wide spread between the two commodity cheeses. Blocks settled at $1.65 per pound, while barrels floundered to $1.33.

There is plenty of milk in the Midwest, thanks to unusually mild late-summer weather in the Great Lakes states and a lackluster start for back-to-school milk bottling. Spot loads continue to move at a discount, prompting cheesemakers to top up their vats. In a few months, a new facility in Michigan will open its doors, and regional cheese supplies will climb further. Demand is mixed. Foodservice continues to struggle, with the notable exception of pizzerias, while sales at retail remain brisk. After recent declines in the cheese markets and the dollar index, U.S. cheese is starting to look more competitive in the export arena.

CME spot whey added a penny this week and closed at 33.5ȼ. But the Class III markets focused on the more significant drop in cheese values, causing a rout in the futures. September Class III plunged $1.75 to $15.13 per cwt. Fourth quarter futures lost 70ȼ on average.

Spot Class IV products rallied this week. CME spot butter advanced 3ȼ to $1.515. Cream demand has perked up a bit, which is slowing churn rates. Extremely hot weather in some of the most populated parts of the country has likely boosted ice cream demand. Print butter continues to move through retail quickly, and grocers anticipate a strong baking season ahead. But home cooks may do less entertaining for the holidays this year. 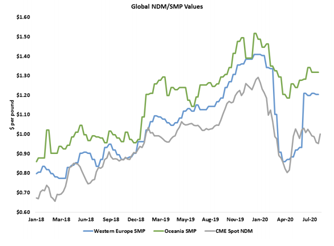 Although butter and powder values moved higher at the spot market, the futures held back. Traders are clearly wary about long-term demand prospects. Class IV futures settled a little lower today than they did last Friday. The September contract fell 9ȼ to $13.26. 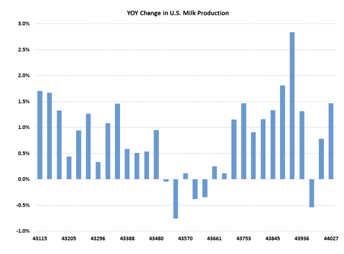 Enticed by the promise of $20+ milk – in the futures, although not in reality, for most – U.S. dairy producers did their best to top up their bulk tanks in July. National milk output reached 18.6 billion pounds, up 1.5% from the prior year. USDA also revised upward its estimate of June milk production. Dairy producers don’t typically add cows in July, when springers are in relatively short supply, but this year low slaughter rates translated into a slightly larger milk-cow herd. There were 9.352 million cows in milk parlors last month, up 2,000 head from June and the first month-to-month increase since March. The dairy herd was 37,000 head larger than in July 2019. 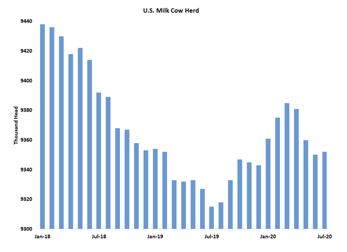 Milk output topped the prior year in most of the major dairy states. Better milk yields drove the bulk of the increase. Dairy producers managed to improve milk production per cow in most regions. However, in the Pacific Northwest and Idaho, supply management programs and steep discounts on excess milk kept output per cow in check. In the Southeast, sweltering temperatures dampened milk yields. In the Southwest, both factors were in play.

This month, the weather is having an even bigger impact on milk output. A heat wave is scorching California and the Southwest. In California’s Central Valley, home to the nation’s greatest concentration of dairy cows, record-breaking temperatures are stressing the herd. The heat has been sufficiently severe and prolonged that it is raising death tolls and likely stymieing conception, which could trim springer supplies at the margins next year. 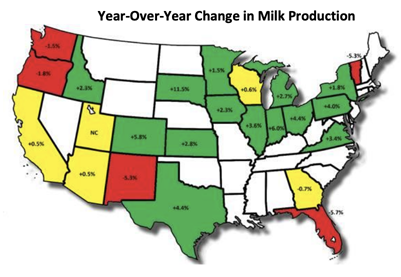 Once cooler autumn weather arrives, milk output is likely to bounce back. Going forward, gains in U.S. milk production will depend primarily on milk yields, as there are very few places with room for a lot more cows. Limitations on expansion are likely a blessing in disguise, as the industry probably won’t need a more milk until the pandemic is contained and the economy is on firmer footing.

It was a dry week in the Corn Belt, and the crops are starting to look parched. Soil moisture reserves are largely depleted, and there isn’t much rain in the forecast until late next week. In many areas, yields are still likely to be above average, but hopes for a record-breaking corn crop are slowly evaporating. The recent dry spell may be particularly hard on the soybean crop as it transitions from the pod-setting to the important pod-filling stage. Estimates of corn and soybean yields are starting to slip from the recent, nearly euphoric highs. The Pro Farmer crop tour called for a national average corn yield of 177.5 bushels per acre, well short of USDA’s latest forecast at 181.8. For soybeans, Pro Farmer called for a 52.5 bushel per acre yield. USDA stands at 53.3.

USDA reported another big week for new crop soybean exports, further lifting bean values. There is potential for large U.S. corn exports as well, but there is still plenty of grain in South America, so significant rallies on LaSalle Street will make U.S. corn less competitive. December corn settled today at $3.405 per bushel, up 2.5ȼ for the week. At $9.0475, November beans are 6ȼ higher than they were last Friday.

California is different in many ways.  Today’s post will deal with the issue of negative Producer Price Differentials (PPD) and component payments and how they do and do not impact California producer milk payments.  California [Read More …]