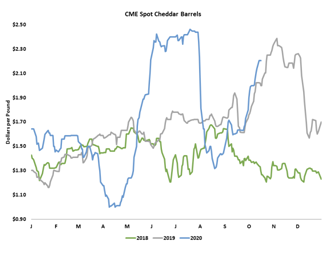 The spot Cheddar markets once again sprinted straight uphill, and barrels set the pace. They finished today at $2.205 per pound, up another 15ȼ. In the past five weeks, barrels have added an astonishing 61ȼ. Blocks settled 7.25ȼ higher, at $2.72.

After seven months of immense volatility and roughly four months of sky-high prices, many cheese buyers have been forced to gamble, going hand-to-mouth as much as possible in the hopes of avoiding the unpalatable prices of the moment and paying less later. But when their cupboards start to look bare, they’re forced to spend what it takes to restock, providing a slow, steady stream of purchases despite the cost. They’re also competing with government contractors flush with taxpayer funds to fill food boxes. The bulk of the government buying is supposed to end soon, but, judging by the sudden rally on Thursday, the trade may expect another round of aid for dairy purchases.

Cheese output remains strong. Dairy Market News reports that western cheesemakers “are running their facilities at or above design capacity” in order to meet firm demand from pizza makers, grocers, and the food box program. And the new Michigan cheese plant will be up and running next week. 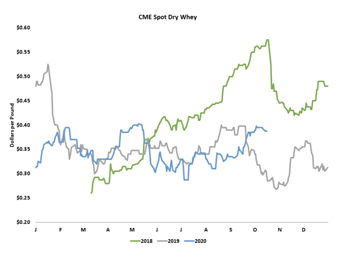 CME spot dry whey slipped 0.75ȼ this week to 38.75ȼ. Despite the minor setback, the spot whey market has largely held the significant ground it has gained in the past month. Other indications of whey product pricing were quietly firmer. Chinese buyers continue to purchase robust volumes of U.S. dry whey and concentrate with at least 34% protein. Solid exports are helping to keep stocks in check, despite strong cheese and whey production. However, some merchants warn that a continued rally in the whey market could push domestic values above foreign rates, at which point exports would likely slow. Butter bounced back this week. The spot market climbed 9.75ȼ to $1.51. Butter demand is inching higher, as befits baking season. Western manufacturers tell USDA’s Dairy Market News that “some retailers project a 20% jump in holiday sales numbers and weekly features.” Those who cube, wrap, and box butter in consumer-friendly sticks will be especially busy this year, as homebound bakers churn out a veritable mountain of breads, pies, cookies, cakes, and tarts. However, bulk butter makers may still pile up product due to lost foodservice demand. On balance, butter inventories are likely to remain burdensome. 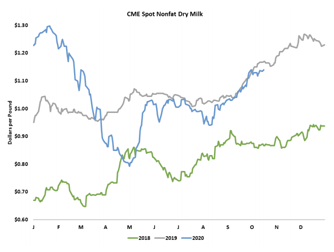 CME spot nonfat dry milk (NDM) added another 1.5ȼ this week and reached $1.14, matching the highest value since late February. Thanks in large part to resilient international demand, the milk powder market has regained all the ground it lost in the pandemic panic. Europe marketed skim milk powder (SMP) aggressively last year as they moved the last of the Intervention stockpile and a surplus of fresh product abroad. With the help of a weaker dollar and competitively-priced NDM, the U.S. has captured some of Europe’s marketshare in Southeast Asia. Domestic demand for NDM is also strong as cheesemakers fortify their vats with milk powder.

With most products moving higher, milk futures advanced. November Class III was strongest. It gained $1.19 this week and reached an impressive $20.92 per cwt. The November Class I price will be much higher than October’s disappointing $15.20, so the producer price differential should be less punitive. Fourth-quarter Class III futures climbed to new life-of-contract highs. The strength spilled over into next year as well. First-quarter futures settled at prices last seen in February and early March, before the pandemic pummeled the markets. Class IV values improved by double digits, but they remain well below the cost of milk production. 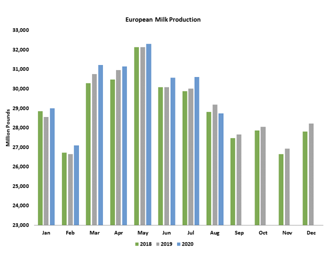 Milk output is growing in much of the world. Australian milk collections continue to rebound after several bad years, although they have a long way to go before the recover to their 2015 peak. Australia’s August milk output was 3.5% greater than last year. In Europe, August milk collections were nearly 1% lower than the prior year, as heat wilted production in the continent’s four largest dairy nations. But output likely recovered last month, and the European Commission expects 1.4% growth this year.

In the United States, dairy producers are likely improving milk yields and adding cows. Over the past 12 weeks, dairy cow slaughter 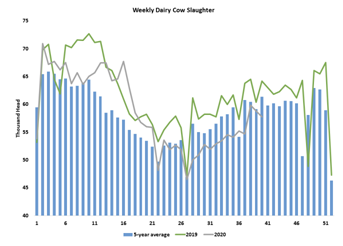 has averaged 9.3% less than the prior year and 5.2% less than the historic average. Either heifers are very scarce, or the milk cow herd is growing. Given concerns about the global economy and demand, we likely don’t need the extra milk.

Another round of export sales to China prompted more gains in the grain markets. December corn futures topped $4 per bushel for the first time since January. They closed today at $4.02, up 7ȼ. After huge gains last week November soybeans took a step back. They dropped 15.5ȼ to $10.50. Soybean meal futures continued to climb. The December contract rallied $3.80 to $367.50 per ton.

The weather pattern is shifting in South America, with rains expected for most growing areas. That could dampen the bullish enthusiasm in the near term, but it’s a La Niña year. The futures will likely be as fickle as the forecast.

All Eyes on the CME Spot Cheddar Markets

Retaliatory tariffs give global competitors hard-to-reverse advantages in the world’s largest market. Editor’s note: This article is based on written comments submitted Wednesday (August 1) to the House Ways and Means Committee’s Subcommittee on Trade on behalf of [Read More …]