The cheese markets stand well below the summer peaks but have made a surprisingly quick return to the lofty elevations from a month ago. Despite the impressive uphill sprint, the trade is clearly questioning the cheese market’s stamina. 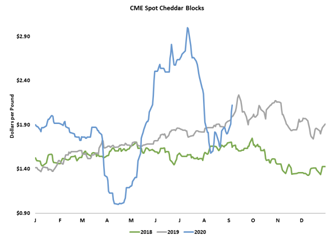 Spot cheese came roaring back this week. CME spot Cheddar blocks surged 29.75ȼ to $2.125 per pound. Barrels advanced at a similarly swift pace, climbing 27ȼ to $1.70. Although both cheese markets stand well below the summer peaks, they have made a surprisingly quick return to the lofty elevations last visited a month ago. The promise of new funding for USDA’s Farmers to Families Food Box program likely spurred them onward and upward. Some end users who been waiting for a further setback likely rushed to buy, the memory of this summer’s painfully high prices fresh in their minds.

Despite the impressive uphill sprint, the trade is clearly questioning the cheese market’s stamina. This week’s rally lifted nearby Class III futures, but the gains were much fainter than the bold advance in the spot market, and the futures petered out late in the week. September Class III climbed to $17.06 per cwt., up $1.37 from last Friday. October rallied $1.25 and November added 21ȼ. Deferred Class III futures failed to rise at all. 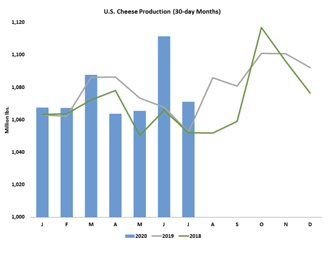 The disconnect between the spot market and deferred futures suggests that the trade is anxious about cheese demand once the government stops buying in a couple months. Any near-term spike in cheese prices is likely to slow sales later this year and into 2021. Last week, U.S. cheese looked affordable to foreign buyers, but its foray into competitive pricing was exceptionally brief. Retail orders remain strong, but demand from foodservice is fitful. Mozzarella output barely topped yearago levels in July, hinting that even pizza sales are no longer booming. That meant more milk for Cheddar, which could weigh down the cheese market going forward. U.S. cheese output totaled 1.1 billion pounds in July, up 1.8% from the prior year and the highest July total on record. U.S. cheese production is likely to eclipse prior-year volumes by even wider margins beginning next month, when a shiny new facility opens in Michigan.

More cheese means more whey, and the lion’s share of the whey stream is headed to the drier. Production of dry whey for human consumption was 2.2% greater than the prior year in July. Domestic demand for premium whey products has slowed along with the economy. But commodity whey is moving abroad at a lively pace. The U.S. exported 40.7 million pounds of dry whey in July, up 64.6% from the very small volumes of a year ago. Strong exports helped trim the dry whey stockpile slightly from May to June and from June to July, but inventories remain ample. On July 31, U.S. dry whey stocks were 26.5% greater than they were a year ago. 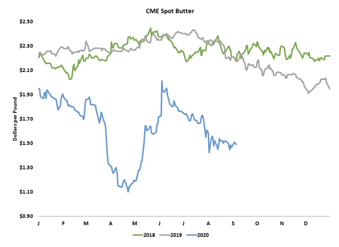 U.S. butter production was just 0.7% greater than the prior year in July. Still, at 373 million pounds, the U.S. churned out more butter than it has in any July since 1945. Imports continue to add to U.S. butterfat supplies, but the trade deficit is narrowing, with slower imports and larger exports than in recent months. The butter trade balance should continue to improve, as U.S. butter is much cheaper than European product. Nonetheless, poor restaurant and foodservice sales will likely continue to keep U.S. butter values in check. Spot butter remains comfortable in a relatively narrow trading range. It climbed 4.5ȼ this week to $1.4925.

Skim milk powder (SMP) prices climbed once again at Tuesday’s Global Dairy Trade (GDT) auction. After adjusting for protein, the 1.8% increase put GDT SMP at the equivalent of nonfat dry milk (NDM) at $1.29 per pound. The GDT helped give CME spot NDM a slight boost this week. It closed at $1.03, a penny higher than last Friday. U.S. milk powder is by far the cheapest in the world, which has fostered very strong exports since May. Nonetheless, manufacturers’ stocks of NDM climbed more than 20 million pounds from June to July. It’s likely that cheap 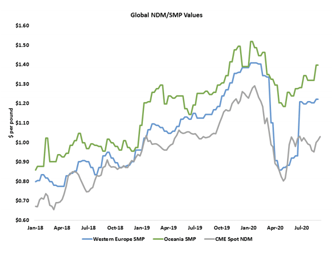 milk in the Upper Midwest reduced demand for milk powder to fortify cheese vats. It seems that domestic demand is a bit feeble even as exports boom. Rising milk powder prices in Europe and Oceania will likely help to support U.S. milk powder values, but upside will be limited until domestic stocks ebb.

Class IV futures were little changed this week. The Class IV market remains a disappointment for dairy producers, with September at $12.82. Fourth-quarter contracts averaged $14.31. USDA announced the August Class IV price at $12.53, down $1.23 from July and $4.21 lower than August 2019. At $19.77, August Class III was $4.77 lower than July but $2.17 higher than August 2019. After a very painful June and July, dairy producers likely won’t suffer a terribly punitive Producer Price Differential in their August milk

check, as the Class I and Class III prices were in sync last month, dramatically reducing the incentive for processors to depool.

It’s starting to feel like fall in the Midwest and the Northeast, but the West is bracing for a holiday weekend heat wave. After all the stress they endured in August, the cows will likely fare poorly. Milk yields will surely suffer. But given ample supplies of all U.S. dairy products and a rocky start to the backto-school milk season, there will be no shortage of milk.

The corn market took a small step back from last week’s highs. December corn settled at $3.58, down 1.25ȼ from last Friday. Beans continued to gain ground. November soybeans closed at 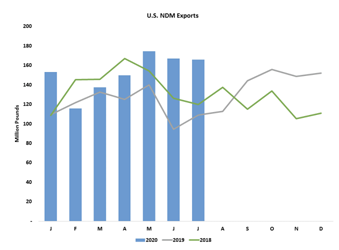 $9.68, up 17.5ȼ. At $317.20, December soybean meal finished at a six-month high of $317.20 per ton, up $7.50 this week. Exporters are booking sales for new crop corn and soybeans at a steady clip, with good prospects for more given China’s growing needs for imported feed. Outside of the storm-battered fields of central Iowa, U.S. row crops are in reasonably good shape, but yield prospects continue to slip. USDA estimates that 23% of soybeans and 32% of corn are growing in areas suffering drought. Parched soils will not help U.S. crops to reach their full potential in the home stretch.

The T.C. Jacoby Weekly Market Report Week Ending February 14, 2020   There was a lot of red on LaSalle Street this Valentine’s Day. The powders were particularly weak, as fears of coronavirus sickened the [Read More …]

Summer is winding down, but the cheese markets are still sizzling. CME spot Cheddar blocks jumped a nickel this week to $1.93 per pound, the highest value since November 2016. Barrels climbed 7.25ȼ to $1.7375. [Read More …]