There is no word yet on when USDA will begin spending its allocations, which makes it difficult to assess the repercussions for the dairy markets. The dairy funding could make a big splash if it is spent in a short time, or slowly ripple through the markets if spent steadily throughout the next year.

Uncle Sam donned a Santa cap this year, and promised gifts for all. News that Congress passed a $900 billion stimulus package invigorated the dairy markets during the two holiday-

shortened trading weeks. Congress allocated more money for the Supplemental Nutrition Assistance Program (SNAP) and other food aid programs, which will presumably allow those who are struggling financially to put a bit more dairy in their grocery carts. The bill provided $400 million for The Emergency Food Assistance Program (TEFAP), a small, unspecified portion of which USDA will spend procuring American-style cheeses and low-fat ultra-high temperature milk. USDA also received $400 million for the Dairy Donation Program to reimburse dairy processors for donations to food banks and $1.5 billion to buy commodities – including seafood, fresh produce, dairy, and meat products – and donate them to food banks. The total for dairy is likely to be noticeably less than the massive government expenditures this year, but it is still significant.

There is no word yet on when USDA will begin to spend this money, which makes it difficult to assess the repercussions for the dairy markets. The dairy funding could make a big splash if it is spent in a short time, or slowly ripple through the markets if the agency spends in a steady stream throughout the next year. 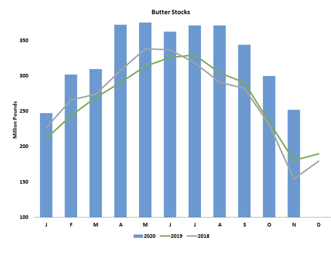 Aside from the TEFAP, the legislation does not specify which dairy products USDA should buy. Based on its experiences in 2020, the dairy trade seems to assume that government purchases will have the greatest impact in the cheese markets. However, the text of the bill suggests USDA may focus its spending power elsewhere. The legislation directs the Secretary of Agriculture to facilitate orderly milk marketing, reduce “volatility relating to significant market disruptions,” and maintain “traditional price relationships between classes of milk.” The bill also directs the Secretary to buy “surplus eligible dairy products,” which surely argues for more butter donations. Last week’s Cold Storage report showed November 30 butter stocks at nearly 252 million pounds, the highest November inventory since 1993. Butter stocks were 39.4% greater than they were a year ago.

Current USDA Secretary Sonny Perdue and former Secretary Tom Vilsack, who will take Perdue’s place at the helm pending Senate approval, are both well aware of the impact that government interference had on the cheese markets. After several years leading the U.S. Dairy Export Council, Vilsack has expressed concerns about government purchases lifting U.S. dairy product prices too high to compete internationally, which is a major problem for an industry that is growing much more quickly than domestic demand. If USDA spends more on butter and fluid milk and less on cheese than it did this year, its well-intentioned aid could be spread more equitably among dairy producers, some of whom cashed very small milk checks this year even in months with sky-high cheese prices. 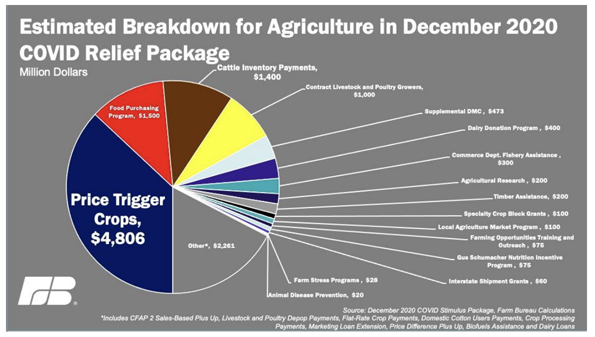 The bill also directs the Secretary to make additional payments to medium and large dairy producers whose losses were far larger than the $250,000 payment caps under the Coronavirus Food Assistance Program (CFAP). CFAP was meant to compensate dairy producers for 80% of their pandemic-related losses, and USDA estimated potential payments of $5.39 billion. However, due primarily to the caps, the agency has distributed less than $3 billion so far. Along with some money left in last year’s budget, the new funding will likely allow USDA to send medium and large producers sizeable checks. However, it’s possible the agency will still lack the funding to put these producers on equal footing with their peers whose calculated losses fell below the payment caps. Farm Bureau estimates the agency will have $2.26 billion in discretionary funds to spread among several agricultural assistance programs this year, including these supplemental CFAP payments for dairy producers

The dairy aid will be especially helpful for producers who suffered from low Class IV values, a punitive producer price differential, or supply management restrictions this year. Hopefully, it can be structured in a way that does not muddle market signals. The industry is awash in milk and demand is fitful at best. Millions of Americans are out of work and struggling to make ends meet. Vaccinations are underway, but it will be several months before consumer habits and foodservice traffic return to their pre-pandemic norms. 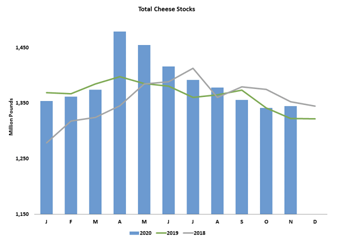 Cheese demand continues to fall short of last year during a crucial season for sales. Cheese stocks climbed marginally from October to November, a time when they typically decline. At 1.34 billion pounds, stocks are now 1.7% greater than they were a year ago. Nonetheless, spot Cheddar and Class III values bounced back from recent lows, likely fueled by hopes that government spending would offer a boost. CME spot Cheddar blocks reached $1.64 per pound today, up 2.25ȼ since the Friday before Christmas. Over the same period, barrels rallied 3.25ȼ to $1.5075. Spot whey powder also added 1.25ȼ and climbed to 46.75ȼ, just shy of the recent high. Those gains helped lift nearby Class III values. The January contract added 50ȼ over the holidays, and February jumped $1.47 to $17.91 per cwt. 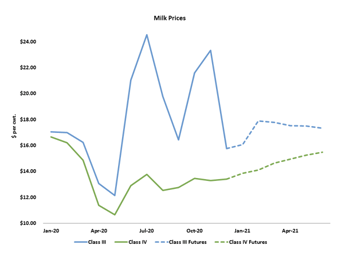 The Class IV products slipped. CME spot butter dropped 0.75ȼ to $1.4475. Spot milk powder settled a penny lower than where it stood the week before Christmas, at $1.14. Class IV futures finished modestly in the red at prices that are well below the cost of milk production.

The feed markets are poised to ring in the new year at new highs. Booming exports and concerns about South American weather continue to lift crop values. The weak dollar and tight stocks around the world suggest exports will stay strong, further tightening U.S. inventories. Argentina highlighted just how scarce South American feedstuffs have become today when it announced a ban on corn exports until at least March. That gave the bulls another burst of momentum. March corn settled today at $4.745 per bushel, up nearly 40ȼ in the past two weeks. March soybean meal jumped $22.50 to $427.80 per ton. March soybeans climbed 76.5ȼ to $13.005, and cries of “beans in the teens” rang out on LaSalle Street.

Apply Now, Until September 30 to be Considered for Funding Due to the recent catastrophic flooding events, Congress has provided the U.S Department of Agriculture Natural Resources Conservation Service in Wisconsin with over $7 million [Read More …]