On calving day, cows will suddenly lose 20 to 30 grams of calcium to the udder for the production of colostrum, which is about two to three times the amount of calcium lost compared to the day prior to calving. This sudden and urgent demand for calcium sends the cow into negative calcium balance.

As the cow’s blood calcium levels decline around calving, her body responds by secreting what is called a parathyroid hormone, or PTH, into the bloodstream. The PTH hormone increases bone mobilization – the natural process by which the body dissolves part of the bone in the skeleton in order to maintain or raise calcium levels. It also increases intestinal absorption, and decreases urinary excretion of calcium in response to hypocalcemia.1

Mobilization of calcium from the cow’s skeleton is called lactational osteoporosis. Amazingly, a cow loses about 9 to 13 percent of her skeletal calcium in the first month of lactation but she can restore the lost calcium to her skeleton later in lactation.2 In the short term, this stresses the cow’s bones, but it allows her to maintain normal blood calcium levels over the long term.1

“Most cows will revert back to positive calcium balance by six to eight weeks post-calving, meaning the calcium intake now equals or exceeds calcium outflow,” said Dr. Garrett Oetzel, DVM MS, professor at the School of Veterinary Medicine, University of Wisconsin-Madison. “However, she can draw on her bone calcium for up to four months into lactation, including during times of stress or low feed intake.”

Dr. Brian Miller, senior professional services veterinarian with Boehringer Ingelheim said SCH can be detected with the help and advice of your herd veterinarian. “Your veterinarian can help retrieve blood samples of recently fresh cows to determine blood calcium concentrations,” he said. These test results can be used to build and execute an economically viable prevention strategy for SCH on your dairy operation.

“Given the high prevalence of SCH and the high losses associated with this disease, the focus must be on prevention,” said Dr. Miller. “There are two main approaches to prevention of SCH - dietary manipulation pre-calving and strategic oral calcium supplementation post-calving. Neither approach is sufficient by itself to prevent all of the negative impacts of SCH; however, using both approaches together will minimize the impacts of SCH as much as possible.”

Dr. Oetzel said the best oral calcium sources are acidogenic salts such as calcium chloride and calcium sulfate.9,10 “These salts provide additional calcium for absorption from the gut, plus they extend the time period that the cow is in a relatively acidic state.”11 Because calcium chloride and calcium sulfate invoke an acidogenic response in the cow, this enhances the cow’s responsiveness to PTH and improves her ability to mobilize calcium from her own bone.

“We see a double effect when using a good oral calcium product – both rapid absorption of the oral calcium and mobilization of the cow’s own skeletal calcium,” said Dr. Oetzel. “Blood levels peak 30 to 60 minutes after administration. Bovikalc® extends calcium release for 6 to 12 hours because of the bolus formulation.11”

Get the best economic response to oral calcium supplementation

An in-depth evaluation was conducted of the economic benefits of administering one Bovikalc® calcium supplement to dairy cows at calving, and then again the day after calving.12 Expected economic returns from different supplementation groups are outlined in Figure 1. 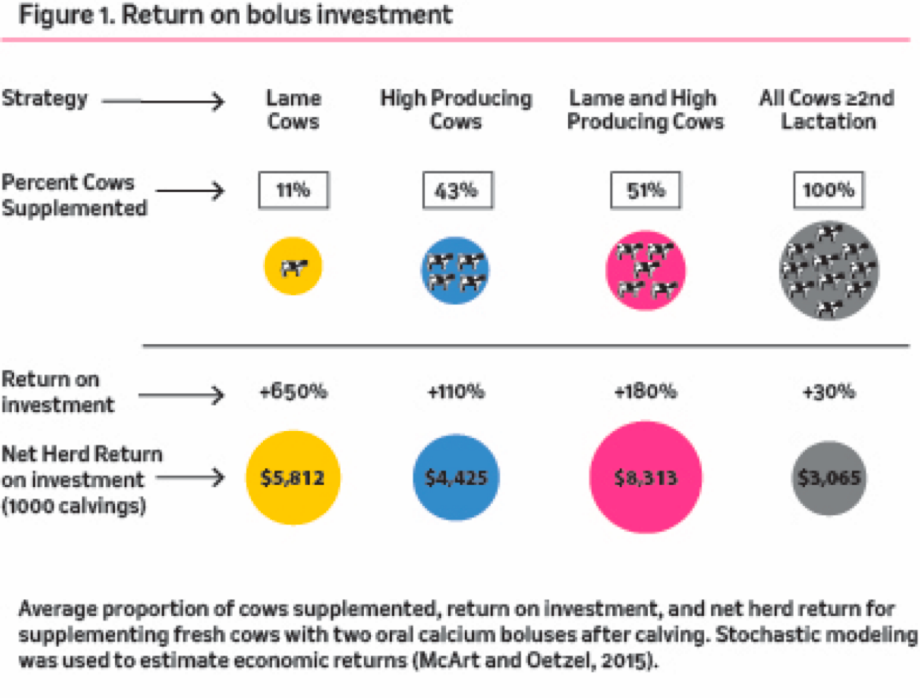 Supplementing all second and greater lactation cows provided a 30 percent return on investment (i.e., each $1.00 invested returned the $1.00 plus an additional $0.30). Since this approach involves supplementing all cows, the average net herd return on investment was substantial, but lower than if only the high-producing and lame cows were supplemented.

“Supplementing high producing cows and lame cows has the highest net return on investment, but blanket use of BOVIKALC on second and greater lactation cows is often preferred by the end user. It is a much simpler strategy to implement and does not require locomotion scoring or creating a list of cows by milk production,” Dr. Miller concluded.