The bulls frolicked on LaSalle Street this week. Their revels were exuberant, enhanced by a palpable sense of relief. It seems that the steep December selloff was a necessary correction after the cheese market went too high, too fast. It was not – as many feared – the start of a sustained downtrend. With the exception of butter, dairy demand is outpacing supply and supporting dairy product prices. 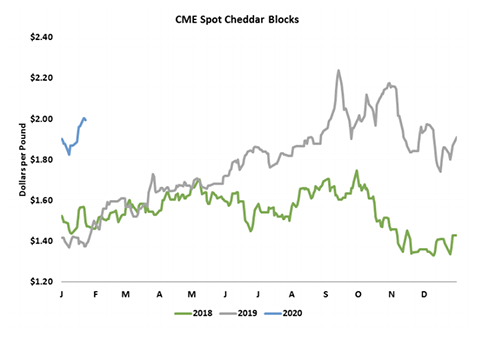 Cheese values were particularly strong. CME spot Cheddar blocks climbed back above $2.00 per pound for the first time since November, and they finished at $1.995, up 3.25ȼ from last Friday. Barrels rallied 4.75ȼ to $1.61. There were 1.315 billion pounds of cheese in cold storage warehouses at the end of the year, 2.2% less than the prior year and the smallest month-end stockpile since January 2018. Inventories of American-style cheeses, including Cheddar, have barely budged since October and are down 7.1% from last year. Tighter fresh Cheddar stocks have helped to support cheese and Class III values. Despite a slight setback in spot whey prices, March through December Class III futures climbed 1716 Hidden Creek Court P 314.821.4456 E info@jacoby.com Suite 200, St. Louis MO 63131 to new life-of-contract highs this week. The March contract was particularly strong. It jumped 63ȼ to $18.25 per cwt. 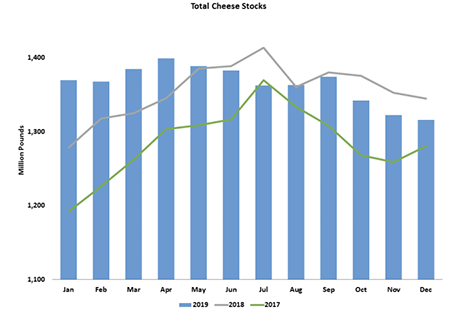 The milk powder market continues to gain ground around the world. CME spot nonfat dry milk (NDM) climbed 1.25ȼ to a new fiveyear high and closed at $1.2875 per pound. At the Global Dairy Trade (GDT) auction on Tuesday, the average winning price for skim milk powder (SMP) improved 0.7% to the equivalent of NDM at $1.47. However, the overall performance was mixed. Buyers bid up SMP for March and April delivery, but the other contracts periods moved lower. Whole milk powder (WMP) values topped the previous auction by 2.4%. Most other dairy products also moved higher at the GDT, and the index rallied 1.7%. Cheddar added 0.6% and butter jumped 5.5%. However, anhydrous milkfat slumped 2.6% to a one-year low.

Butterfat values continued to languish in Chicago as well. CME spot butter dropped 2ȼ to $1.86, the lowest value since November 2016. There were 190 million pounds of butter in storage at the end of the year, the highest December 31 total since 1993. Cream is cheap and churns are running hard, which suggests that warehouses will be well stocked for months to come. Prices are likely to remain under pressure. Butter values weighed on nearby Class IV futures this week, while deferred contracts inched higher. 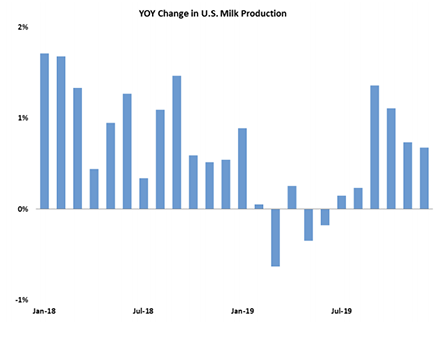 U.S. milk output totaled 18.3 billion pounds in December, up 0.7% from a year ago. That was the smallest year-over-year gain since August. Milk yields improved just 0.8% from a year ago, the smallest increase since June. Although milk remains plentiful in the Pacific Northwest and mountain states, production per cow could not keep pace with the stellar yields of the prior year in those states in December. Milk yields also fell short of last year in Wisconsin, as dairy producers in America’s Dairyland struggle with lowerquality forage. The same issue likely plagued some dairy producers in Michigan and South Dakota, where milk yields were no better than a year ago. 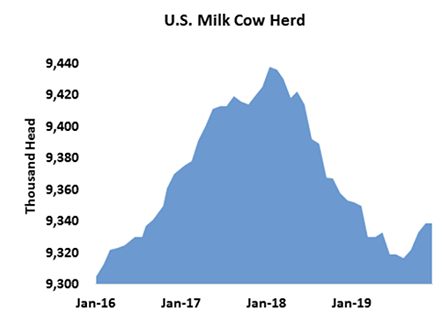 USDA revised its estimate of the November milk-cow herd upward by 8,000 head, but reported no change from November to December. Dairy producers are now milking 9.331 million head, just 14,000 fewer than they were in December 2018. But the dairy herd is still much smaller 1716 Hidden Creek Court P 314.821.4456 E info@jacoby.com Suite 200, St. Louis MO 63131 than it was throughout 2017 and 2018, when the industry was devastated by oversupply. Given still-high slaughter volumes, the industry is not likely to return to those days of painful excess anytime soon. U.S. dairy producers sent 3.15 million milk cows to slaughter in 2018, the highest total since 1986, the year of the cow kill program. Last year, with a noticeably smaller herd, they sent 3.22 million head, an astounding 34.5% of the milk cow herd. That’s a higher cull rate than 1986 or any other year on record. Slaughter volumes in the first few weeks of 2020 confirm that slaughter hasn’t slowed yet. 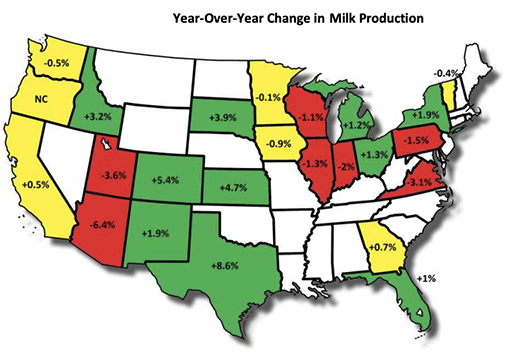 Last year, U.S. milk production topped that of 2018 by just 0.3%, the smallest annual gain since 2009. Modest growth in the U.S. and Europe and a milk production deficit in Oceania have helped to turn the dairy markets around after a rough four years. The shortfall in Oceania is likely to continue. It’s hot and dry in Australia and turning dry in parts of New Zealand. Kiwi milk collections fell short of last year on a fluid basis in December, although milk solids output improved by 0.2%. Troubles Down Under have sparked rumors that Australia will be importing large volumes of cheese from New Zealand. If correct, this could tighten the global cheese market, echoing the milk powder situation.

The dairy markets in general, and the cheese and milk powder markets in particular, are likely to remain well supported.

It was a rather quiet week in the grain pits. March corn slipped 2ȼ to $3.8725 per bushel. March soybean futures dropped 27.75ȼ to $9.02. Soybean meal futures retreated roughly $2 per ton. The soybean markets have been disheartened by the lack of immediate follow-through after the Phase One trade deal. China can buy soybeans much cheaper in Brazil than in the United States, and they are not inclined to pay extra just to foster goodwill. China likely won’t be shopping for U.S. soybeans until closer to harvest in the Northern Hemisphere, and we have plenty to spare.

Markets This Week Succumbed to Fear and Uncertainty The CDC reports that the symptoms of coronavirus typically only last for a short time and may include a cough, runny nose, headache, fever, and “a general [Read More …]

The T.C. Jacoby Weekly Market Report Week Ending September 25, 2020 Those markets that gained ground last week gave some of it back this week, while last week’s losers are now on the rise. Like [Read More …]