In a series of tweets heard round the world, President Trump lambasted China for stealing America’s intellectual property and “ordered” American companies to look for ways to move their foreign operations out of China. According to President Trump, “We don’t need China and, frankly, would be far better off without them.” The latest fusillade in the trade war pummeled the markets. Stocks, bond yields, and commodities plummeted. The trade war has weakened

the dairy markets on multiple fronts, skewering whey values, subjecting U.S. cheese sales to Mexico to one year of stepped-up taxes, and introducing the idea that U.S. suppliers may be unreliable, as the rules and transaction costs for overseas buyers could change in an instant. Less directly, the trade war has slowed global commerce and stunted business investment with crippling uncertainty. This has reduced demand for goods of all kinds. 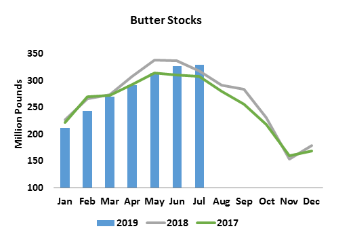 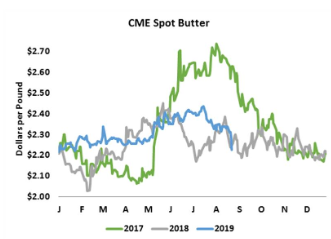 The bad news for butter continued Thursday in the form of USDA’s Cold Storage report, which showed a counter-seasonal increase in butter supplies. In a typical year, butter inventories decline 4.5 million pounds in June and another 8.3 million pounds in July. This year, butter inventories grew 12.5 million pounds in June and 3.5 million pounds last month. The summer increase pushed butter stockpiles up to 329.8 million pounds on July 31, 3.6% higher than the prior year. It’s likely that cheap imported butterfat has boosted U.S. supplies, and this is finally having an impact on U.S. butter values. CME spot butter fell to a seven-month low of $2.2275 per pound, down 11.25ȼ from last Friday. A number of butter futures contracts closed a nickel in the red today, at their daily trading limit. End users who were getting anxious about securing product for the holiday baking season now feel that they can afford to be patient. 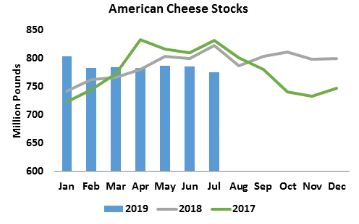 While bearish for butter, the Cold Storage report was decidedly bullish for cheese. There were 1.36 billion pounds of cheese in inventory on July 31, 3.5% less than at the end of July 2018. Cheese stockpiles typically grow more than 24 million pounds from June to July, but this year they fell 18.3 million pounds, the largest July drawdown in USDA records dating back to 1915. American cheese stocks fell 10 million pounds last month to 776 million pounds. They are 5.8% lower than inventories in July 2018 and the smallest volume for any month since March 2018. In short, cheese stocks are shrinking when they should be growing, evidence of tighter milk supplies and booming domestic demand. These fundamentals propelled CME spot Cheddar blocks to new multi-year highs at $1.91 on Tuesday. However, blocks fell back to $1.88, steady with last Friday. Barrels continued to slip, losing a dime this week and closing at $1.665, a two-month low.

The other spot markets managed to shrug off the outside pressures. CME spot nonfat dry milk (NDM) climbed 0.75ȼ to $1.0375. Whey powder rallied 3ȼ to 39.5ȼ. This marks spot whey’s third straight weekly gain, suggesting that the bad news has been fully priced into whey values.

Despite the rough week in the dairy pits, there are reasons to believe that dairy product prices in general and Class III values in particular will soon find their footing. They may not soar, but they will likely remain well supported. Cheese demand is excellent, the whey market is recovering, and milk output is generally steady around the globe. Milk is hovering around $17 per cwt. That’s sufficient to pay the bills but not enough to stimulate much expansion or reassure lenders. Contraction is likely to continue for now, prolonging the potential for adequate milk prices. 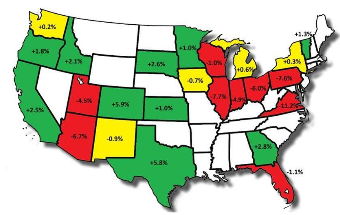 In July, U.S. milk output was 18.33 billion pounds, on par with last year. The industry made exactly as much milk with fewer cows, thanks in large part to improved production per cow in the mountain states and California, where summer heat was not as extreme as it was in July 2018.

The dairy herd continues to shrink. USDA revised downward its assessment of the June milk-cow herd by 4,000 head and reported a further 9,000-head decline last month. At 9.31 million head, the U.S. milking herd is smaller than it has been since January 2016 and some 82,000 head smaller than in July 2018. The industry has been decimated in the Midwest and along the East Coast. Compared to the prior year, there were 35,000 fewer milk cows in 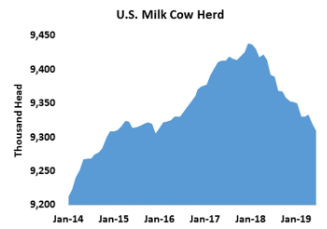 Pennsylvania, 14,000 fewer in Ohio, and 9,000 fewer in Virginia. However, in the past year, dairy producers added 27,000 milk cows in Texas and 10,000 in both Idaho and Colorado. Further expansion in the mountain states will likely be limited until new processing capacity comes online late next year. With noticeably fewer cows, growth in U.S. milk output is likely to remain limited in the near term, helping to undergird the markets.

Grain futures took another sizeable step back this week.Timely rains improved conditions in the field. Reports from crop scouts suggest that, while USDA’s August projections may be a bit too high, a dramatic drop in the national average corn yield is unlikely barring an extremely early frost. Soybean pod counts imply considerably lower yields than last season, but stockpiles are large and demand is in question. The soybean market was hit hard by the latest escalation in the trade war, and September futures fell 24ȼ this week to $8.4325 per bushel. September corn futures lost more than a dime and closed at $3.5975.

US farmers who sell to China feel pain of tariffs

a2 Milk faces massive competition as Nestle launches in China