The Barrel Market is Ablaze

Call the fire department! The barrel market is ablaze. The fire has been raging on LaSalle Street for more than a month. Buyers are in a panic, wondering when the inferno will run out of fuel. Sellers have evacuated. They will do nothing to douse the flames and did not offer any loads at any price. For the first time since August 2016, no barrels changed hands this week. The Cheddar market was already red hot, but barrels pushed the mercury even higher this week. They climbed 7.5ȼ to $2.325 per pound, a new five-year high. Blocks cooled down from midweek highs but still added 3.25ȼ this week. They closed at $2.155. 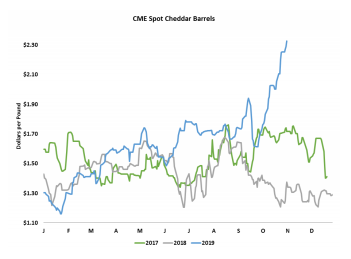 October was the biggest month for barrels in more than 15 years; they vaulted from $1.69 to $2.2875, a nearly 60ȼ increase. Although these higher prices have surely encouraged production and trimmed demand, tighter milk supplies are slowing cheesemakers’ response to sky-high prices. Cheese is generally available on the coasts, but Dairy Market News reports that in the Central region, “Cheese production is still slightly slower than this time in recent years.” However, producers are shifting their product mixes and making more Cheddar. Barrel makers tell Dairy Market News that “nothing has changed.” The tone is still bullish and some processed cheese manufacturers are oversold, which is likely why they are bidding so desperately in the spot market.

When cheese markets burn this hot in the fall, they often flame out in November as holiday orders fade. It’s going to be difficult to sustain barrels above $2.30 for long. But buyers have been wary of purchasing cheese beyond their immediate needs; they may be quick to bid on a setback. And, now that end users have been spooked by $2.30 cheese, there is room for prices to drop to levels that look like a bargain and still provide profits for dairy producers. Both blocks and barrels could give back more than half of the October gains and remain above the $2 mark. Meanwhile, the rally has been baked into October and November cheese pricing formulas and provided the opportunity for dairy producers to sell December through April futures at new lifeof-contract highs. Even the embers of the autumn rally are likely to offer plenty of warmth and good cheer. 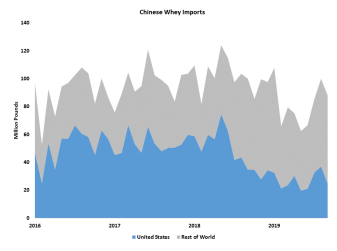 The spot whey market remains in the doldrums. It slipped to a 2019 low of 26.75ȼ on Thursday but then recovered to 28.25ȼ, steady with last Friday. Whey output has slipped in the Central region along with cheese production, but there’s plenty of product in the rest of the nation. The lack of Chinese transactions looms large in the whey market. Due to African swine fever, Chinese whey imports were down 12% from a year ago in September. They are down 22.3% for the year to date. Due to tariffs, U.S. whey shipments to China suffered even steeper declines. They fell 28.6% from a year ago in September and are down 49.3% for the year to date. In September, the U.S. accounted for just 28.1% of Chinese whey powder imports, matching its lowest share
in 12 years. 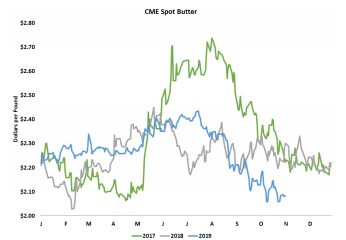 The Class IV products climbed. Spot butter rallied 2ȼ to a still uninspiring $2.08. Cream remains plentiful, but churning is starting to slow as production of holiday dips and spreads ramps up. Global butter continues to trade at a steep discount to U.S. product.

Spot nonfat dry milk (NDM) gained 3ȼ this week and reached a new 2019 high at $1.1825. Higher spot milk prices are restraining drying activity in the Midwest, but there is plenty of milk for driers in the West. Still, demand is more than keeping pace with output, and supplies seem to be tightening. Mexico continues to buy U.S. milk powder in large volumes. China’s appetite 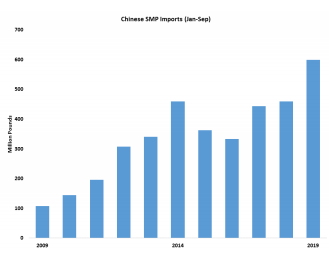 Better butter and milk powder pricing lifted Class IV futures considerably. Nearby contracts gained around 25ȼ, and deferred futures gained a dime or so. Fueled by the fiery cheese market, Class III futures soared to new highs. The November contract added 63ȼ and closed at $20.19 per cwt., the first reading above $20 since 2014. December Class III jumped $1.14 this week to $19.70. 2020 contracts logged double-digit gains, and January topped $18. At these values, dairy producers should be solidly in the black. 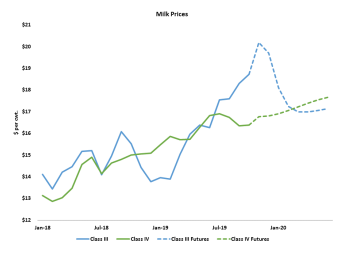 That’s the highest announced Class III price since November 2014. At $16.39, October Class IV was up 4ȼ from September and up $1.38 from a year ago. The grain markets finished a little higher this week. December corn settled at $3.8925 per bushel, up 2.5ȼ from last Friday. November soybeans closed at $9.2425, up 4ȼ. Farmers remain frustrated. The harvest has been painfully slow, with snow flurries and frigid temperatures. Many fields remain too wet to harvest. As of last Sunday, just 41% of the corn crop had been harvested, compared to 61% in a typical year. Harvest progress is woefully behind in North Dakota (6%) and several key dairy states including Wisconsin (13%), South Dakota (14%), Michigan (21%), and Minnesota (22%). Feed quality is likely to be an issue, which could weigh on milk yields in the months to come.

Corn and soybean planting is underway in South America, but conditions are less than ideal. Farmers are hoping for more rains in much of Brazil and Argentina. The forecast features below-normal rainfall for much of the region next week, but the following week looks better. In contrast, fields have been drenched in Rio Grade do Sul, in southern Brazil and nearby Paraguay and northeastern Argentina.

The original report is available at: https://www.jacoby.com/market-report/the-barrel-market-is-ablaze/

The T.C. Jacoby Weekly Market Report Week Ending October 30, 2020 Trading volumes were light, but that led to a sense of foreboding. The rally is real, but how long can it last? The futures [Read More …]