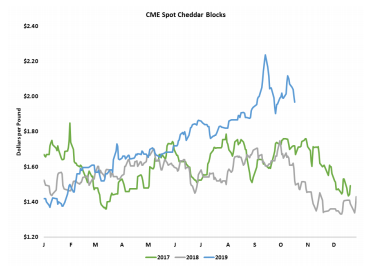 The cheese trade is struggling to interpret an onslaught of mixed signals, and its judgment is further clouded by stupefying volatility and a sense of déjà vu. CME spot Cheddar blocks took a big step back this week, ceding all the ground they gained last week and then some. Blocks closed today at $1.9675 per pound, off 13.75ȼ from last Friday and the lowest price so far in October. Sky-high cheese prices are simply difficult to sustain. As values top $2, end users reassess their purchases. USDA’s Dairy Market News reports that “customers are a bit resistant to current price trends.” Most end users are relying on their inventories and “buying based on short-term needs.” Many foreign buyers have long since turned their attention elsewhere. At the Global Dairy Trade (GDT) auction this week, Cheddar values fell 2.2%, to $1.65 per pound.

On the other hand, domestic demand remains strong enough to forestall an all-out collapse, even at these historically high prices. Although spot Cheddar barrels slipped 2.25ȼ this week, they look surprisingly comfortable at $2, an elevation to 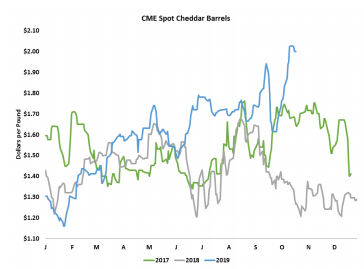 which they rarely climb, much less take a rest and enjoy the scenery. The dramatic reversal in the block-barrel spread – from 43.25ȼ less than a month ago to -3.25ȼ today – is a testament to formidable demand for commodity cheese.

Perhaps the meteoric rise in barrels is, at least in part, the result of government intervention. USDA has promised to purchase and donate processed cheese to food banks in November through February, as part of the agency’s efforts to undo the damage of the trade war. USDA is likely bidding for cheese alongside end users preparing for holiday orders, resulting in a run on the market. As USDA’s bids subside, so might barrel prices. However, this is not the first time that Uncle Sam has stepped in and tried to support the cheese markets in this way. The pricing impact was much less noticeable in previous rounds, which suggests that the government is not the dominating factor at play. Indeed, USDA may have sidelined some buyers who will be quicker to step in as prices fade. And supplies remain far from burdensome. According to Dairy Market News, even as some end users put off purchases, hand-to-mouth buying is “enough to keep processors’ inventory under control.”

The whey market is simply anemic. CME spot whey lost ground again, falling 1.75ȼ to 28.5ȼ per pound. That’s the lowest value in 18 months, and within a few cents of the lowest price ever published in whey powder’s 19-month tenure at the spot market. Volume remains high; 62 loads changed hands in Chicago this week. Tighter milk supplies are reportedly reducing cheese and whey output in the Midwest, but even at these prices, demand is in question. Domestic buyers see whey as a bargain, but foreign demand is curtailed by a strong dollar, punitive tariffs, and reduced consumption from Southeast Asia’s disease-wracked swine herd.

Despite the selloff in both whey and Cheddar, Class III values held their own. November Class III fell 15ȼ to $18.56 per cwt., but most other contracts posted double-digit gains. Class III futures had some catching up to do after taking a wait-and-see approach to the spot market’s steep ascent last week. The trade seems encouraged by the barrel market’s resilience. 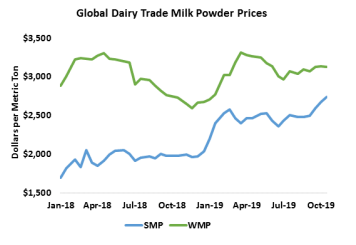 The milk powder market was helped by skim milk powder’s (SMP) strong performance at the GDT. SMP jumped 2.4% to the protein adjusted equivalent of NDM at $1.34. In much of the U.S., tighter milk supplies are reducing drying and boosting demand. Rather than pay a premium for spot milk, many cheese makers are fortifying their vats with milk powder. Manufacturers’ inventories of NDM are “highly committed” into next year, according to Dairy Market News. 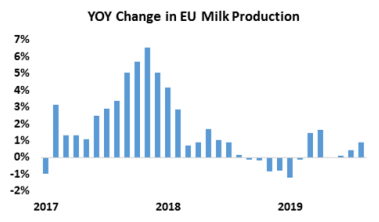 European milk collections have started to bounce back after a sweltering summer. Assuming steady output in Spain, Austria, and Cyprus, which have yet to report data, milk collections in the EU28 totaled 29.1 billion pounds in August. That’s up 0.9% from a year ago, the strongest advance since April. Growth in European milk output began to slow in the second half of 2018, making year-over-year comparisons easier. Relative to August 2017, this year’s output is up just 1%, the smallest two-year growth since June 2017. Gains in output were modest but widespread, with most of the major dairy nations back in the black.

In the U.S., cows are comfortable and milk yields are climbing seasonally. Milk output remains very strong in Idaho, where spot loads are leaving the state at steep discounts. But there is no indication of a looming flood of milk anywhere else. Slaughter volumes continue to impress, signaling that dairy producers are still convalescing after years of financial pain. In the week ending October 5, dairy producers sent 64,242 cows to the packer, 300 head more than the same week a year ago, when the milk cow herd was much greater. This week’s slaughter is the largest on record for the first week of October, aside from 1986, when the government paid dairy producers to kill their whole herds. It could be a while before the U.S. dairy herd starts to grow in earnest.

It’s been a frustrating fall for farmers. Cold wet weather last week – and a blizzard in the Dakotas – slowed harvest efforts noticeably. As of Sunday evening, combines had rolled through just 22% of the grain corn fields and 26% of soybean acreage. Sunnier skies this week may allow for better progress, but the cold snap has capped yields in much of the northern Corn Belt. A hard freeze in the Texas panhandle also damaged crops there. Dairy producers in many regions will face higher costs and lower milk yields as a result of local scarcity and variable feed quality.

Corn futures retreated from last week’s highs, likely due to concerns about exports. December corn settled at $3.91 per bushel, down 6.75ȼ from last week. November soybeans closed at $9.34, down 2ȼ. Barrels Give Up The October And November Rally Which Was Not Built To Last Splat! Thus ends my daughter’s favorite Sunday school song. “The foolish man built his house upon the sand, and the house [Read More …]